By Janet McConnaughey, The Associated Press

NEW ORLEANS — A rusted fragment of the battleship USS Arizona sunk at Pearl Harbor, a woman's munitions plant uniform and ration books all tell the complex story of life on the homefront in a new exhibit at the National World War II Museum in New Orleans.

"Salute to the Home Front," which opens Saturday, explores the bitter fight about entering the war, racial and gender prejudice, and the development of the atomic bomb.

Museum President and CEO Nick Mueller said most of the museum's 6-acre campus shows how the war was won on the battlefield but the new permanent exhibit explains "why it was fought and how it was won on the homefront." 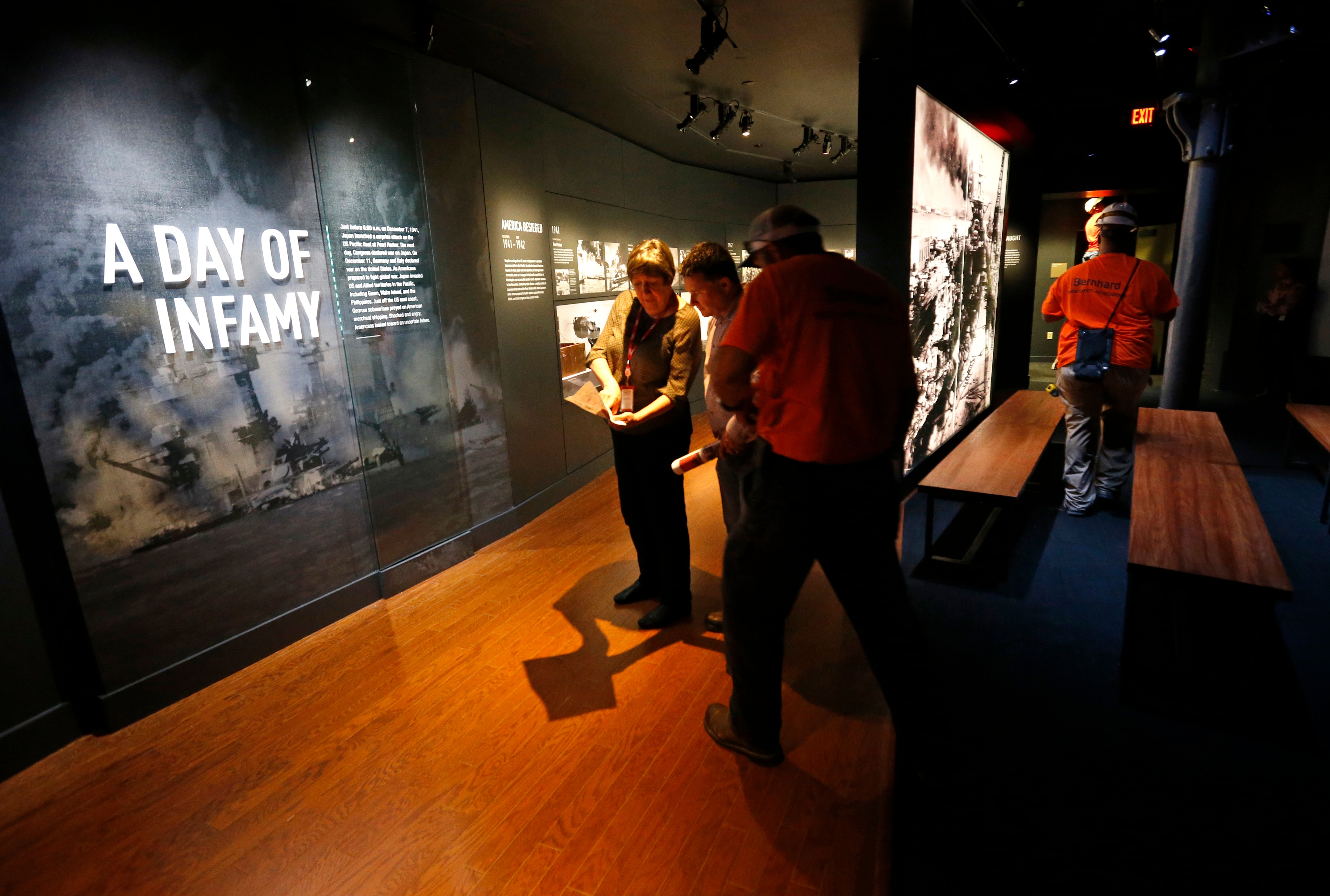 Workers go over the final installation of the permanent exhibit "Salute to the Home Front" at the National World War II Museum which will open to the public this Saturday, in New Orleans, Monday, June 5, 2017.
Photo Credit: Gerald Herbert/AP
The 10,000-square-foot exhibit begins with the years after World War I. The peace treaty that ended the war in 1918 was "punitive and did not really solve the social and cultural ills" that led to the war, according Owen Glendening, the museum's associate vice president for education and access.

"With democracy and capitalism under question, the rise of authoritarian regimes really shook the world," he said.

Among the artifacts are British gas masks for children — one that might fit a 5-year-old and a much bigger one designed to hold an infant from head to waist. Gas had been a major weapon of World War I, and people feared that gas bombs might be dropped in civilian areas.

"Fortunately, it never happened, but the population was scared stiff," Glendenning said. 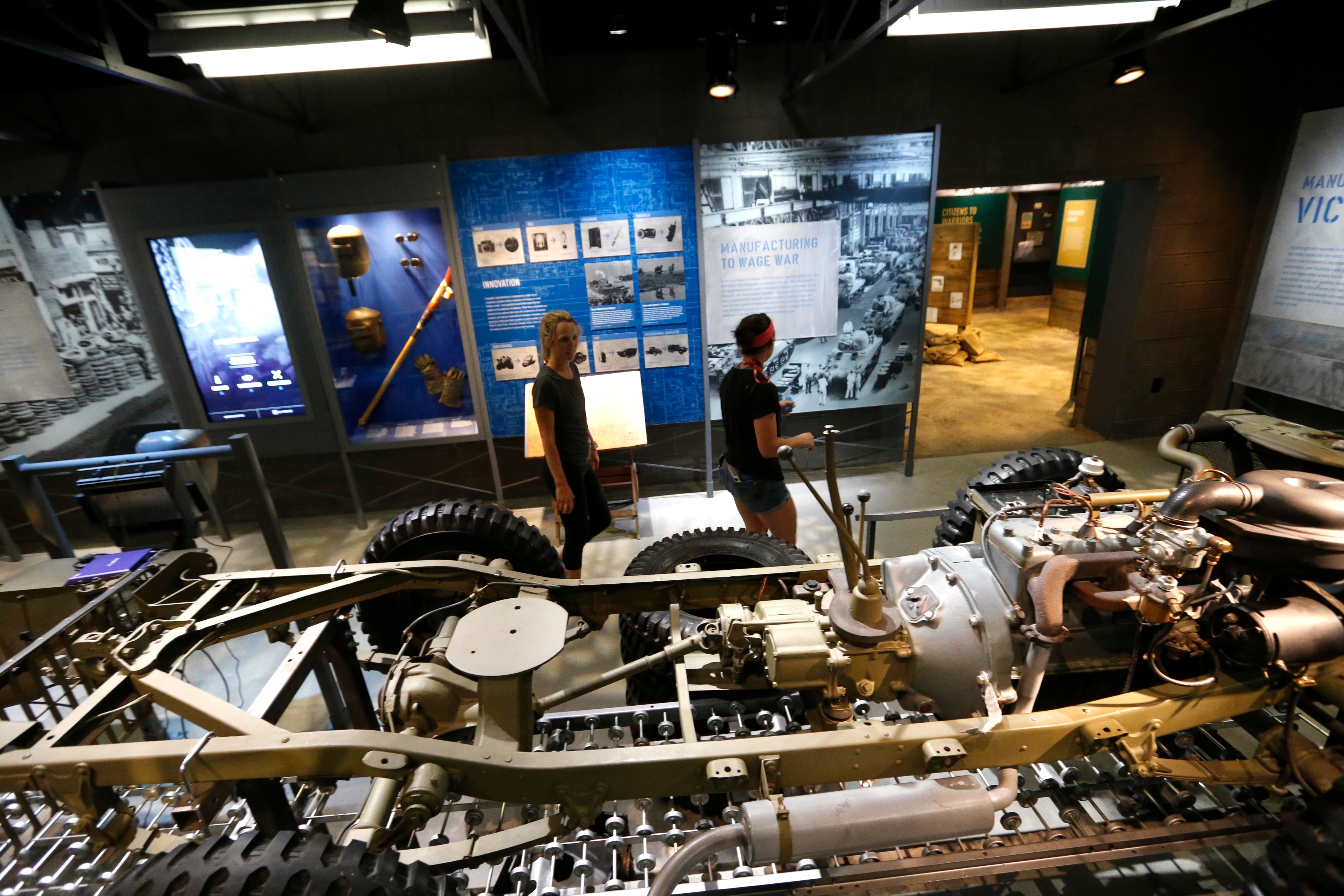 Workers walk past a mock-up of an assembly line manufacturing army jeeps as part of the permanent exhibit "Salute to the Home Front" at the National World War II Museum which will open to the public this Saturday, in New Orleans, Monday, June 5, 2017.
Photo Credit: Gerald Herbert/AP
Headlines and newsreels show the strident debate between U.S. isolationists and internationalists, which ended when Japan bombed Pearl Harbor.

Survivors' accounts of that attack are among more than 50 videotaped oral histories interspersed throughout the exhibit.

"The signature of this museum is to engage people in personal stories. ... We hear from survivors of Pearl Harbor, people on Main Street USA. ... We hear first-hand stories about people who went into factories or into the service to fight," Mueller said.

The exhibit's Main Street USA has a newsstand, a theater marquee and a store window filled with propagandistic wares such as Victory bobby pins and a charm bracelet of military service insignia. 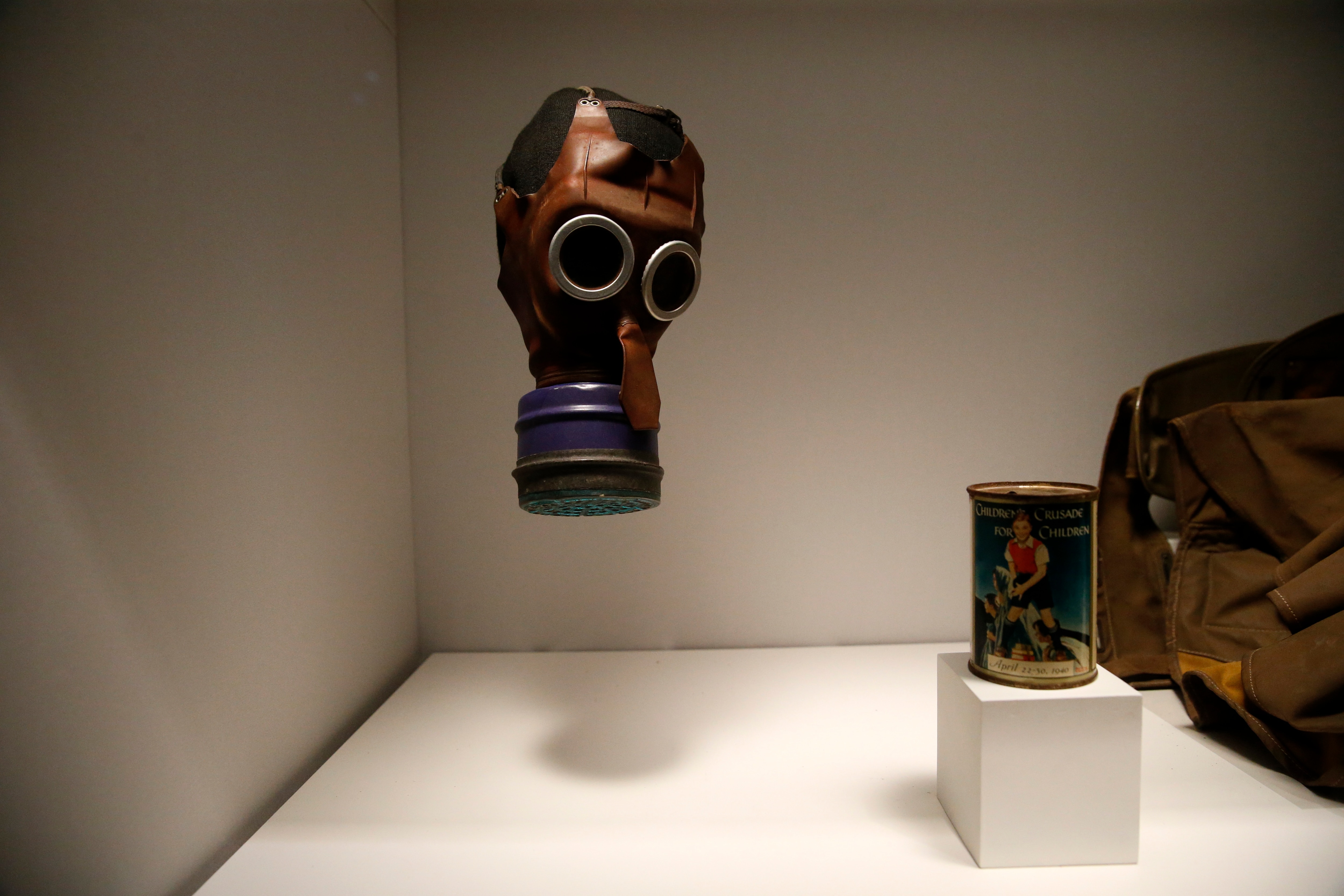 A child's gas mask is part of the permanent exhibit "Salute to the Home Front" at the National World War II Museum which will open to the public this Saturday, in New Orleans, Monday, June 5, 2017.
Photo Credit: Gerald Herbert/AP

Within the picket fence outside two rooms representing a 1940s-style home, one wall is covered with a photo of a victory garden. Nearby are a real hubcap and other metal items for a scrap drive.

Inside the kitchen, the shelves display pamphlets with titles such as "Victory Begins at Home!: Recipes to Match Your Sugar Ration" and "Health for Victory Club Meal-Planning Guide." Pull open kitchen drawers and you see items including ration books, matchbooks and an icebag.

A living-room wall displays a framed map: "Esso War Map II: Invasion Edition." It's designed, an introductory statement says, so people can "follow the strategy of the Allies as it develops from day to day." An open closet in the same room displays children's military dolls, toy guns and dress-up uniforms. 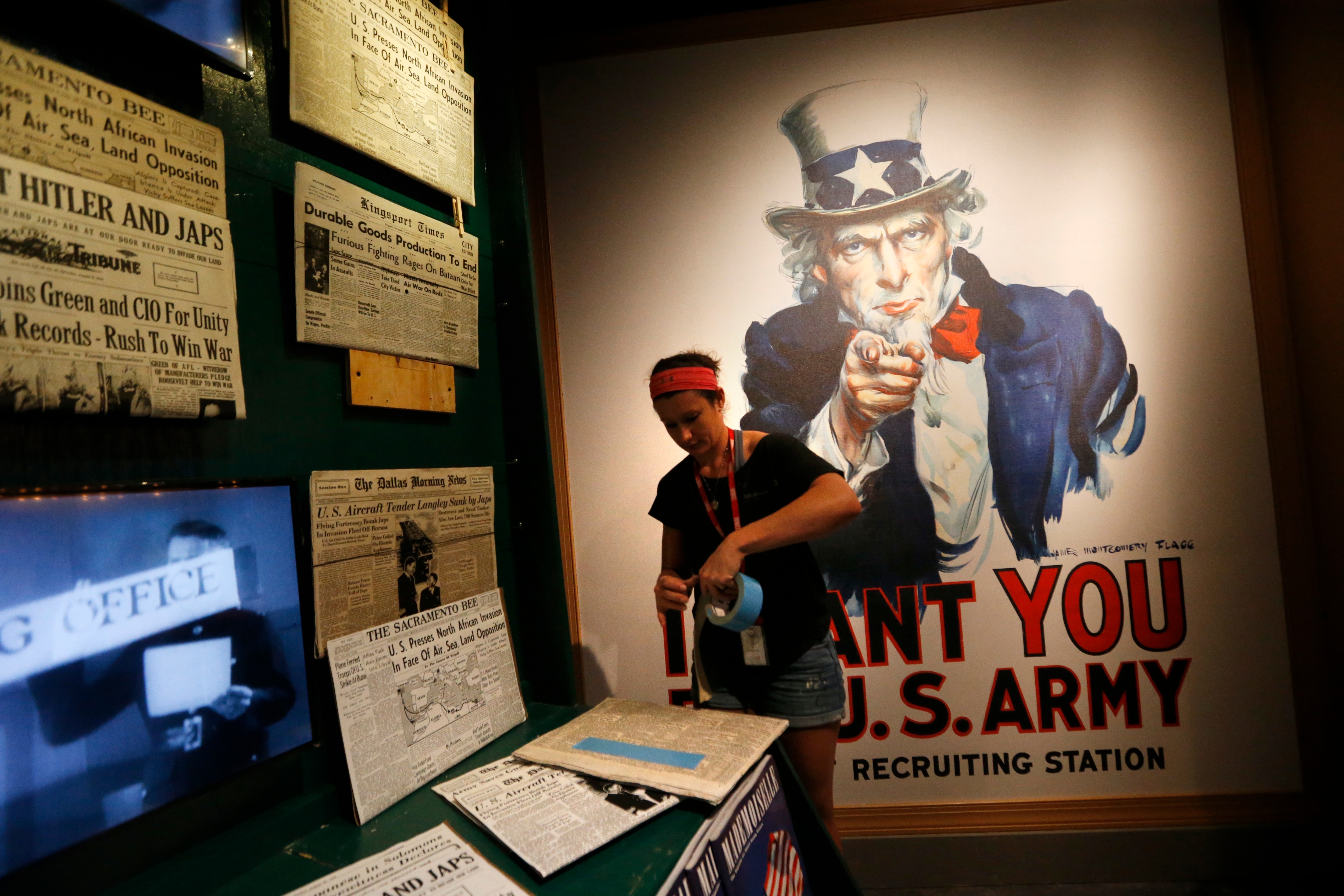 Kristin Guillot works on installing images of newspapers as part of the permanent exhibit "Salute to the Home Front" at the National World War II Museum which will open to the public this Saturday, in New Orleans, Monday, June 5, 2017. The exhibit tells the home front story from the 1920s to the development of the atomic bomb.
Photo Credit: Gerald Herbert/AP
Glendenning said the gallery on the rush to turn from a peacetime economy to a wartime one holds two of his favorite artifacts: a cutaway ship model from the Higgins boat-building plant in New Orleans, built as a reference to show workers how everything fit together, and the overalls and cap worn by a female munitions factory worker.

Toni Kiser, assistant director for collections management, said one of her favorite pieces is at the bottom right corner of the living room's display cabinet: a statuette of Hitler bending over, with a pincushion as his rear end.

This is the second deadly incident involving soldiers stationed in Georgia in the past month.

Steven Seagal appears in Ukraine, serving as a Russian spokesperson

Pentagon reviewing how DC Guard is called up for duty

Army encourages college grads to "skip entry level" and join the military instead.

President Joe Biden is scheduled to sign the bill boosting health and disability benefits for veterans into law on Wednesday.

Here’s the plan for the moldy Fort Bragg barracks that caused 1,200 to be moved