MOSCOW — As the second phase of Russia’s major Zapad 2017 war game heated up Tuesday, the Ministry of Defense found itself on the defensive as videos emerged of a serious mishap on a training range outside St. Petersburg over the weekend that resulted in at least three injuries.

The video, posted Tuesday by local Yekaterinburg, Russia, news site 66.ru, was allegedly taken at a parking lot near a firing range in Russia’s Leningrad region. It shows three non-military vehicles and a man in civilian clothing walking toward the edge of the frame.

In the distance, two Ka-52 attack helicopters can be seen flying at low altitude when suddenly one of the aircraft fires two S-8 rockets at a target just out of frame — crossing directly in front of the lone individual seen in the video. The aftermath of the attack is not shown.

The website that published the video says it does not know exactly when the incident took place but that it likely happened on Sept. 17 or the next day. It is also unclear who the casualties were, though 66.ru speculates: “They were probably journalists.”

Russia and its ally Belarus, with which the Zapad war games are co-managed, have invited a number of international observers — including journalists — to watch the exercises, which are some of the largest since the end of the Cold War.

The Russian Defense Ministry was quick to deny that the videos were genuine — at least at first. 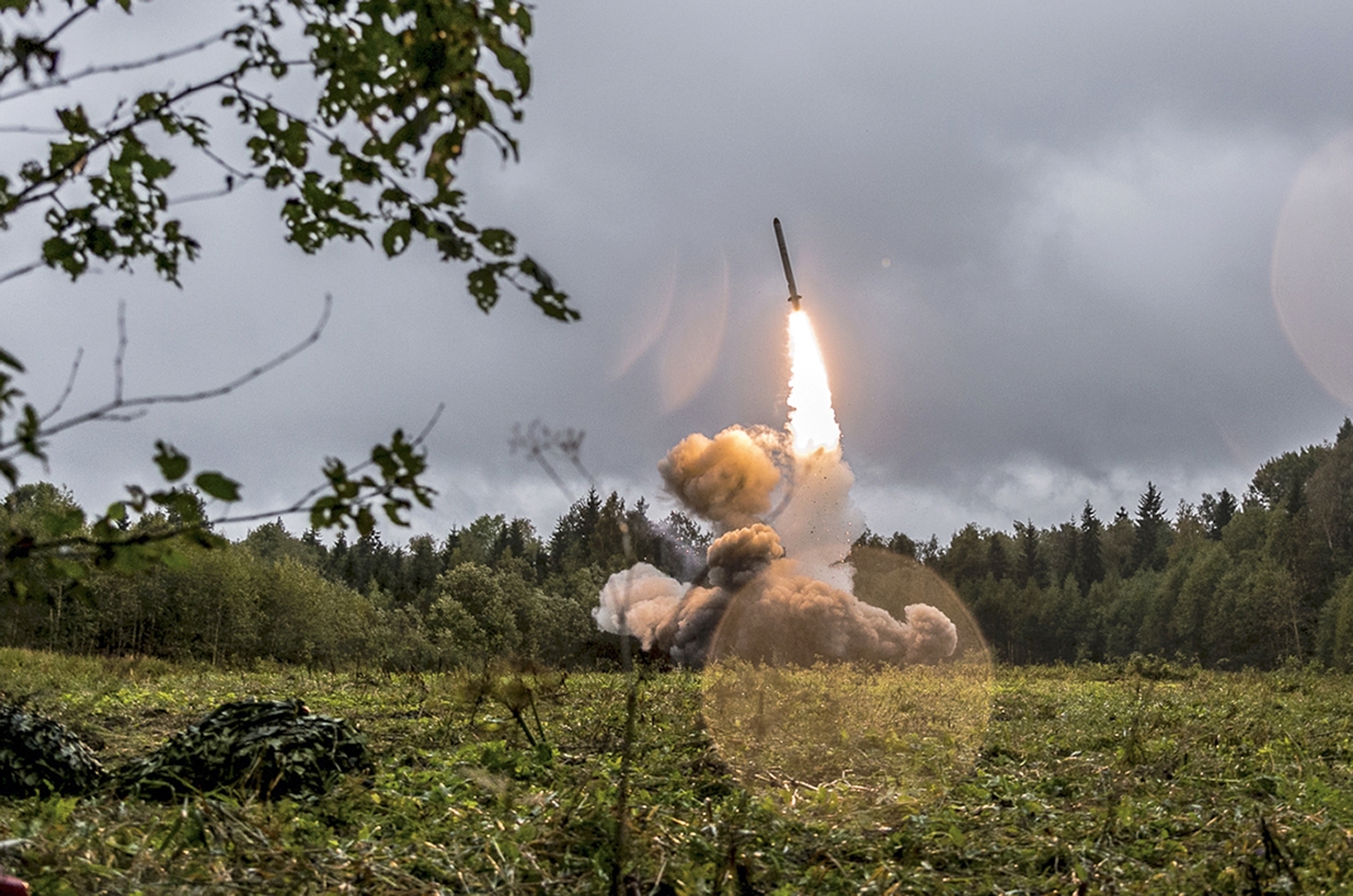 A Russian Iskander-K missile is launched during a military exercise at a training ground at the Luzhsky Range, near St. Petersburg, Russia, on Sept. 18, 2017. (Russian Defence Ministry Press Service/AP)
2 of 10 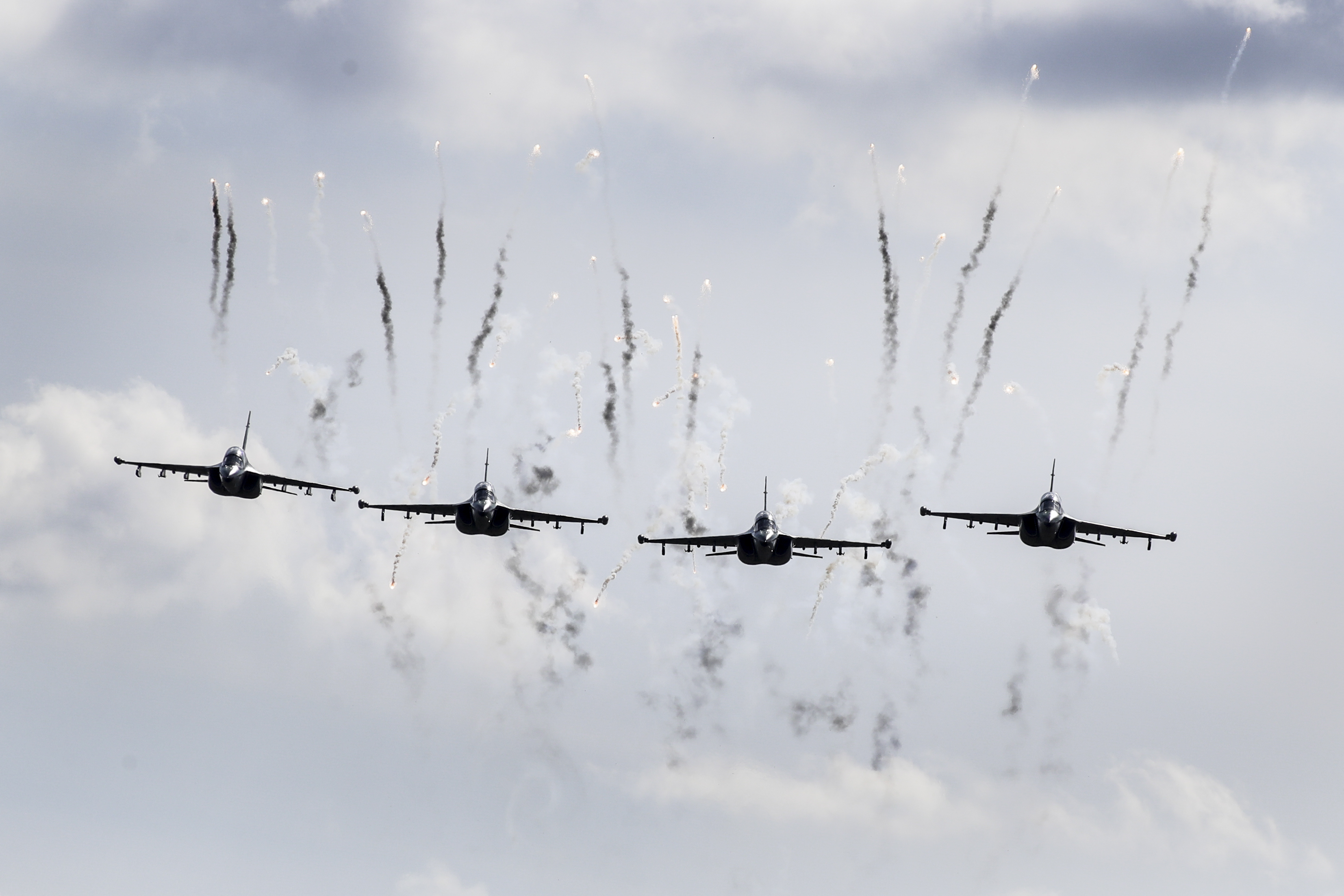 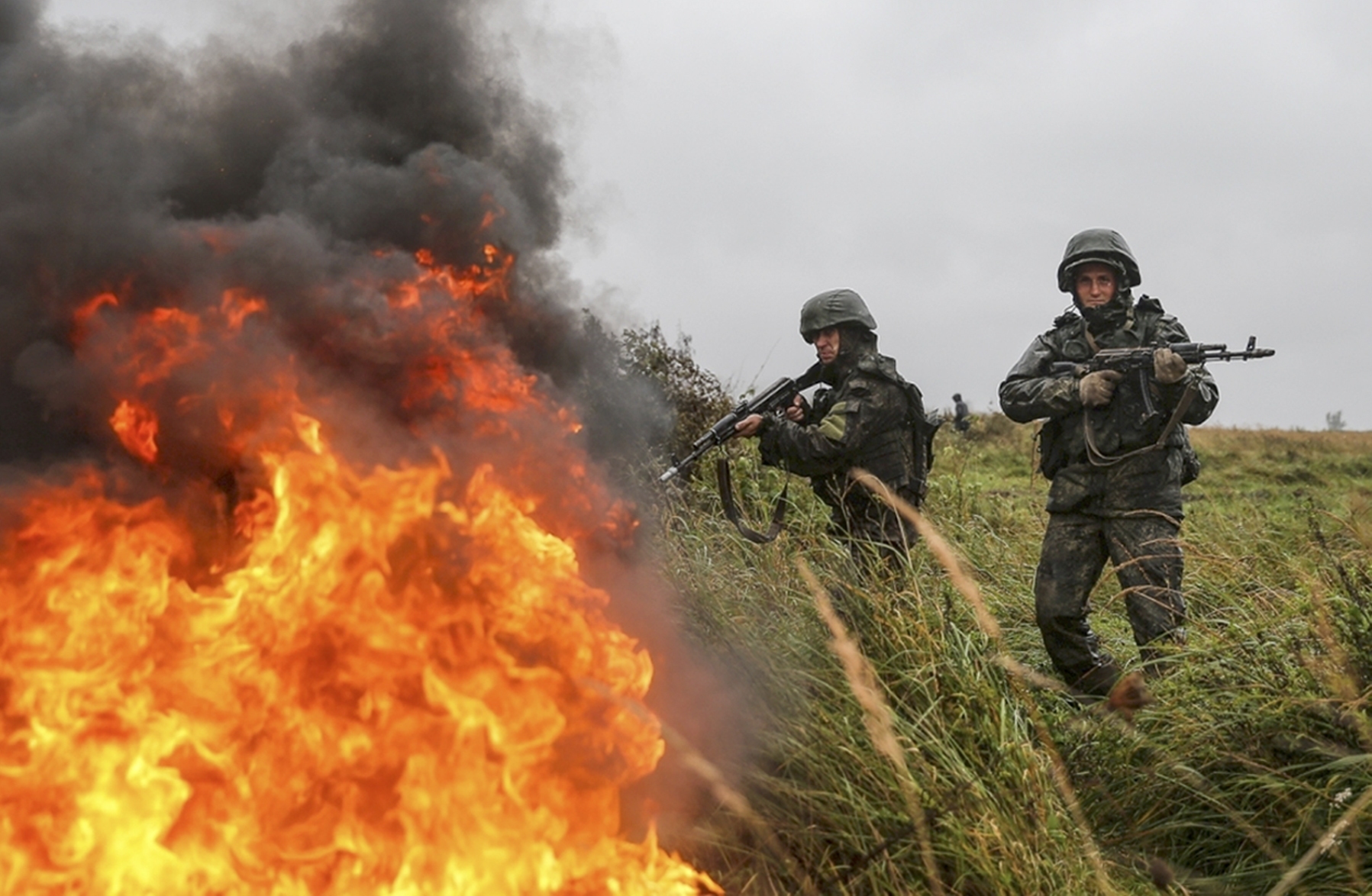 Russian troops participate in a military exercise at a training ground near Kaliningrad, Russia, on Sept. 18, 2017. The Zapad 2017 maneuvers have caused concern among some NATO members neighboring Russia, who have criticized a lack of transparency about the exercises and questioned Moscow's real intentions. (Russian Defence Ministry Press Service/AP)
4 of 10 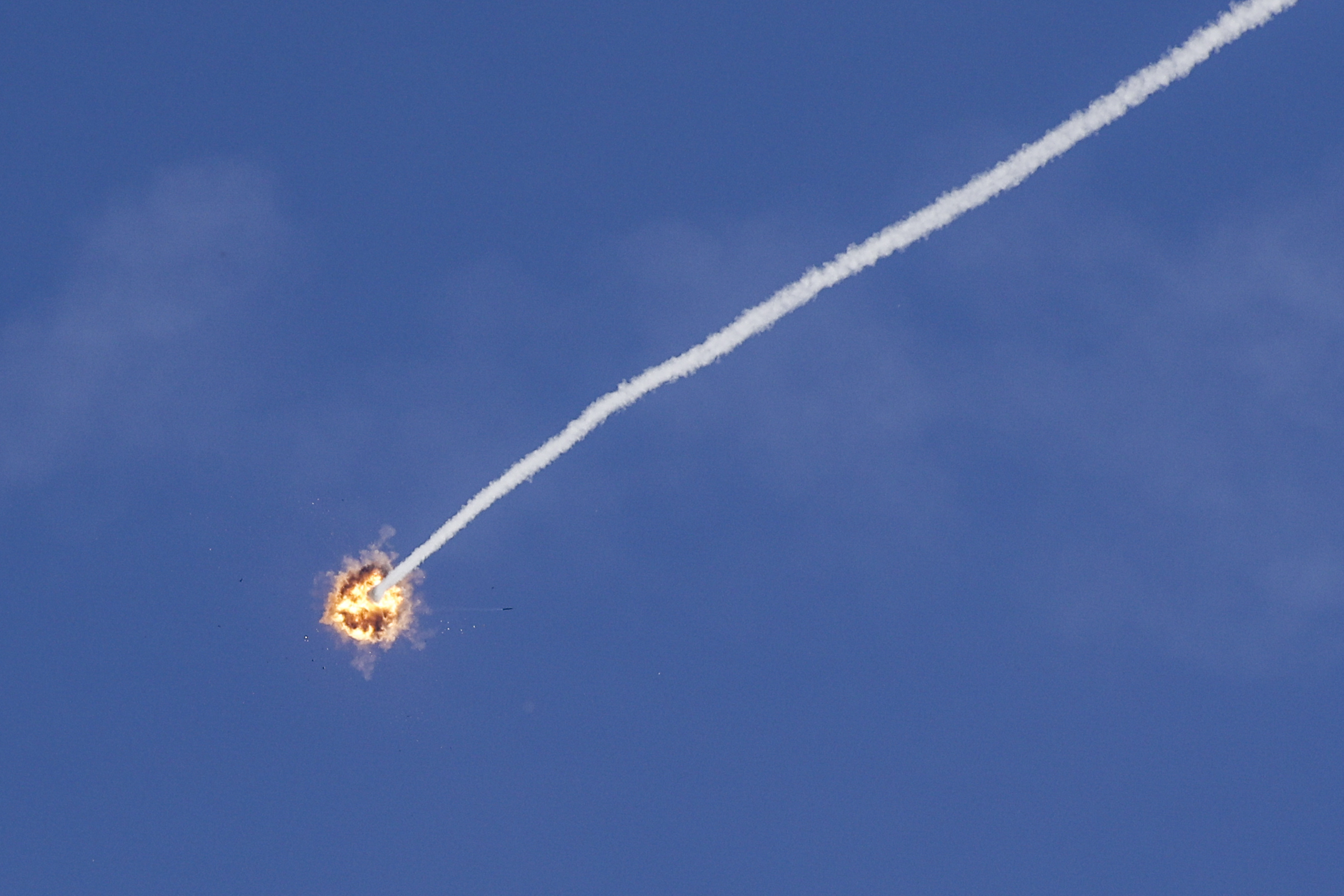 An air-defense missile hits a mock target during military exercises, near a village 125 miles southwest of Minsk, Belarus, on Sept. 19, 2017. (Sergei Grits/AP)
5 of 10 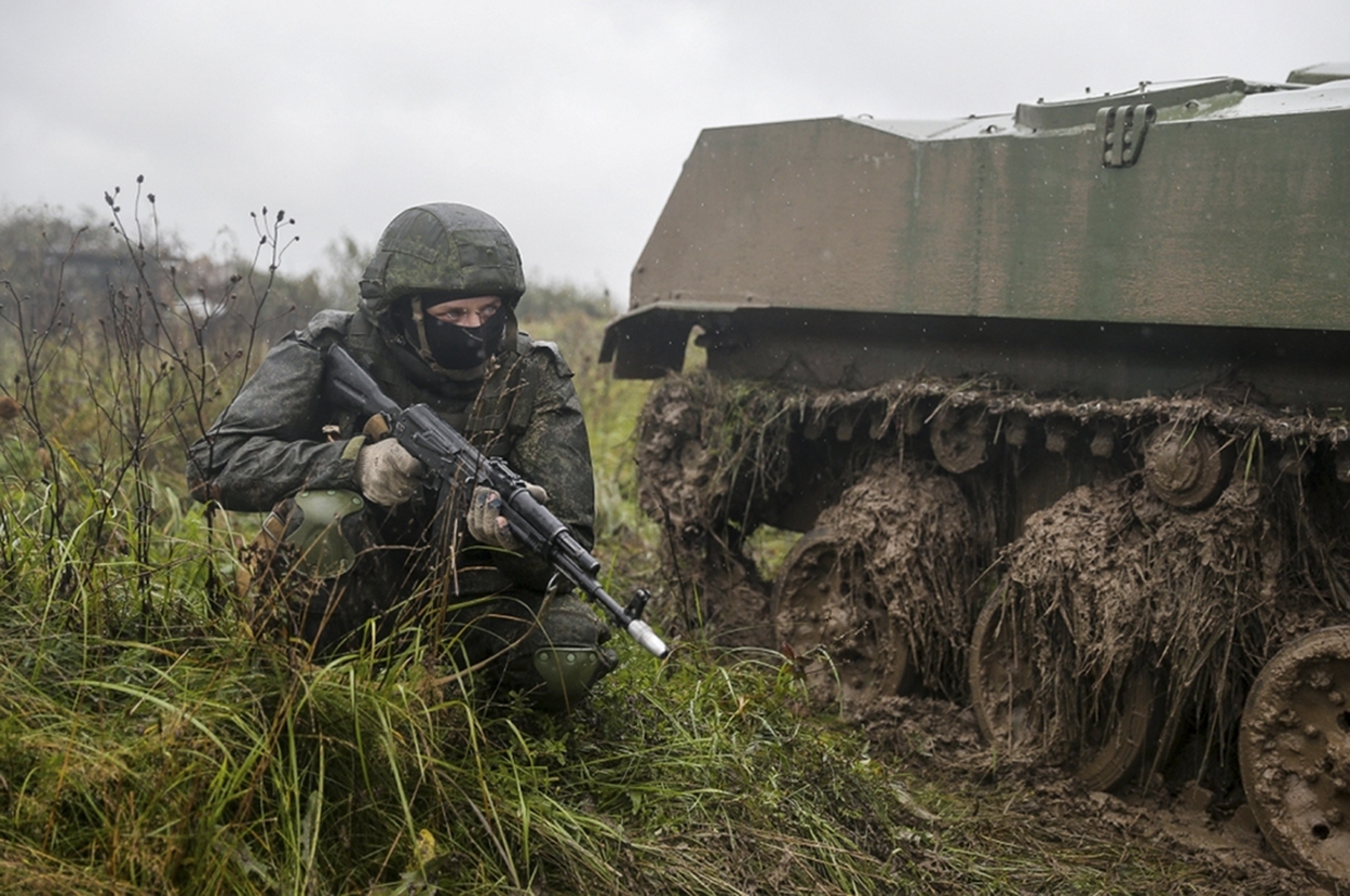 A Russian serviceman attends a military exercise at a training ground near Kaliningrad, Russia, on Sept. 18, 2017. (Russian Defence Ministry Press Service/AP)
6 of 10 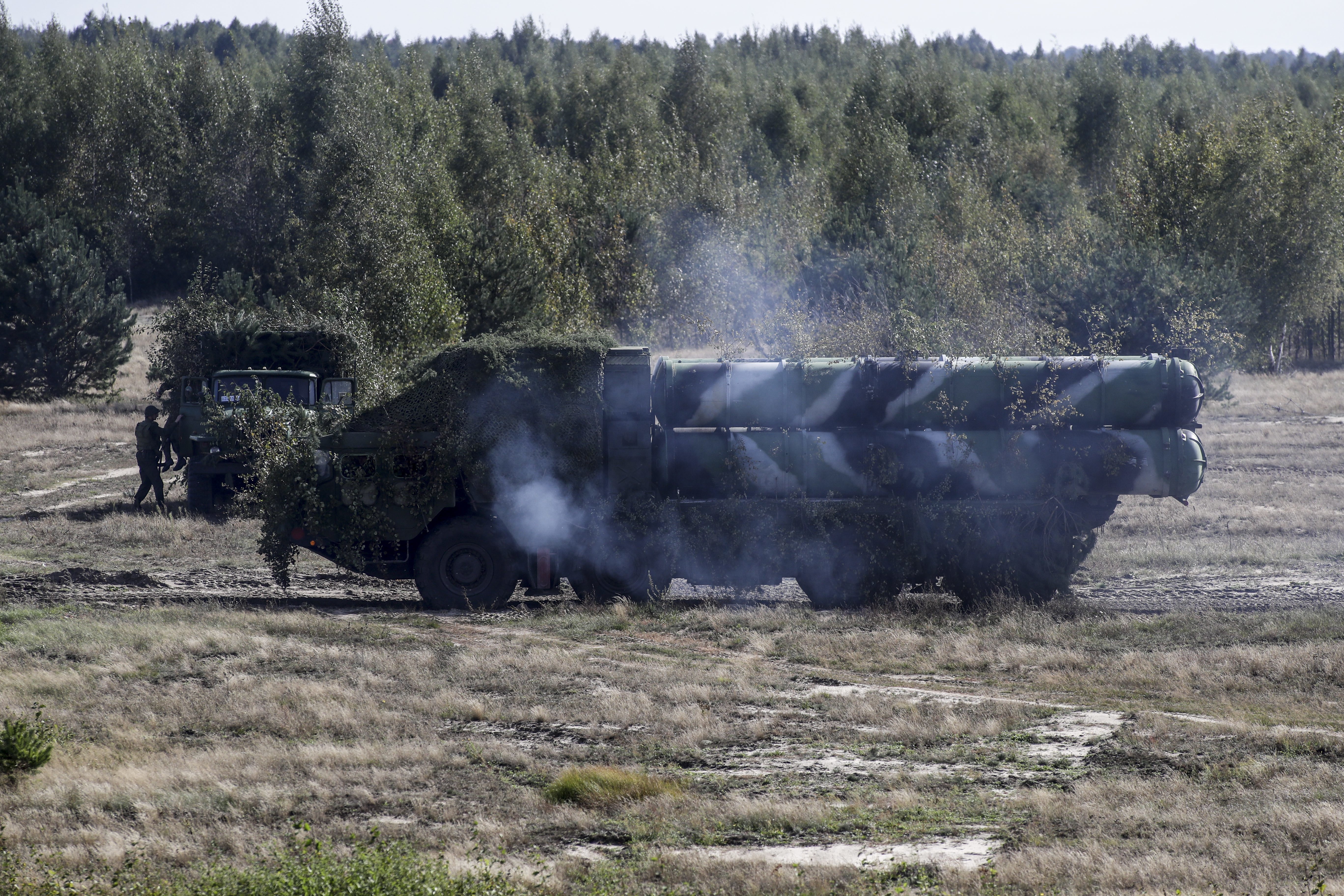 A Belarus Army air-defense missile system moves during military exercises, near the Volka village southwest of Minsk, Belarus, on Sept. 19, 2017. (Sergei Grits/AP)
7 of 10 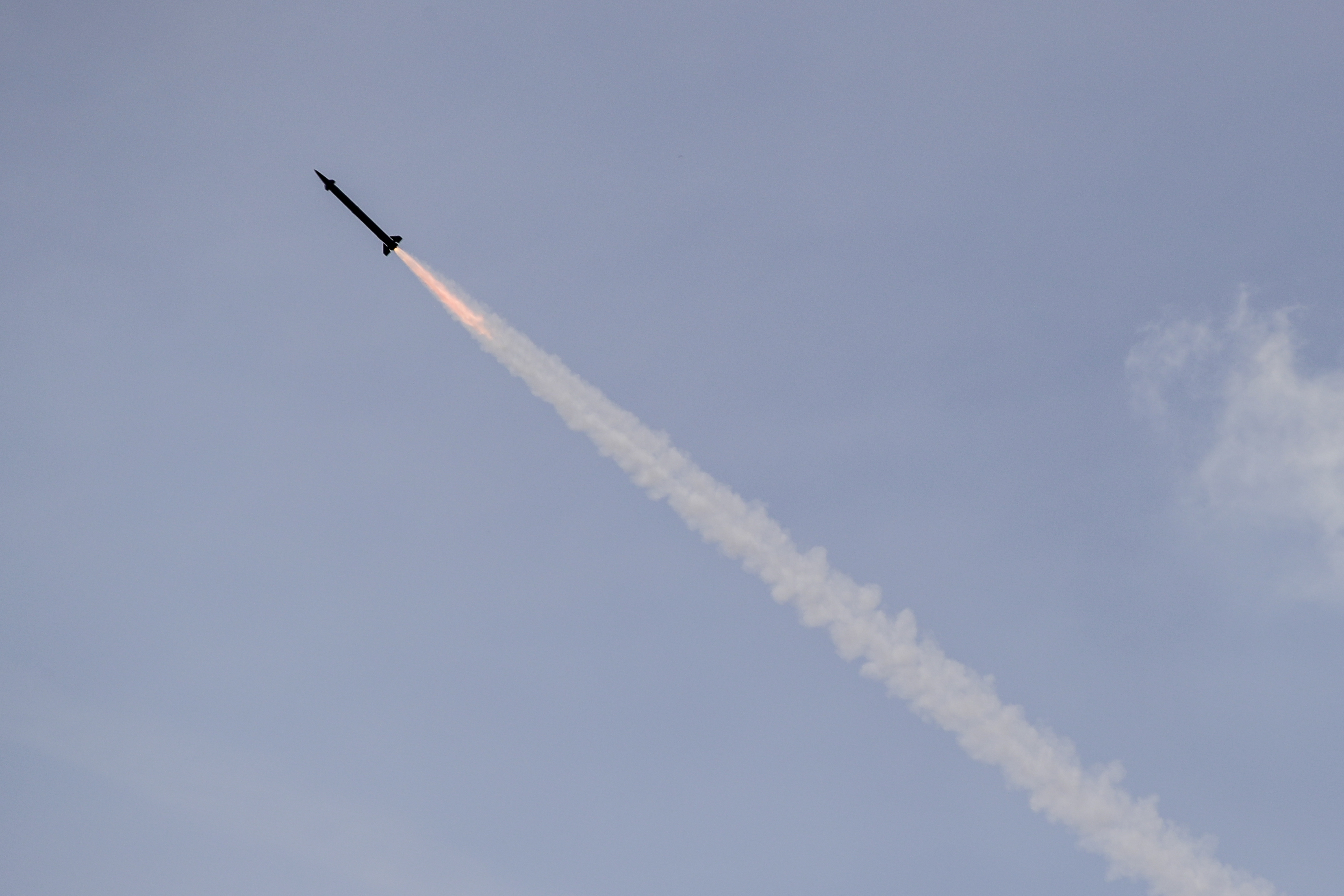 An air-defense missile flies to hit a mock target during the Zapad military exercises on Sept. 19, 2017. (Sergei Grits/AP)
8 of 10 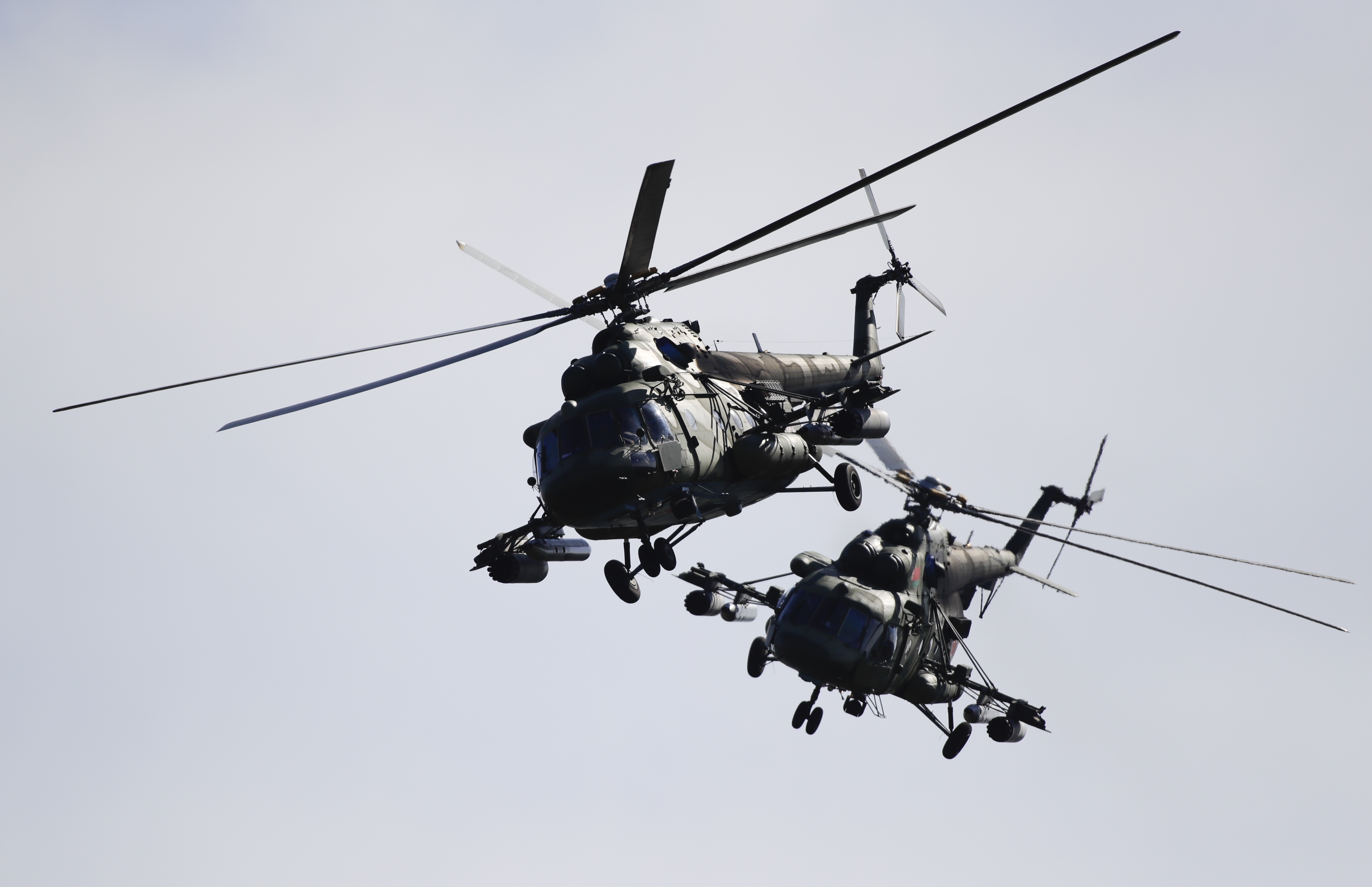 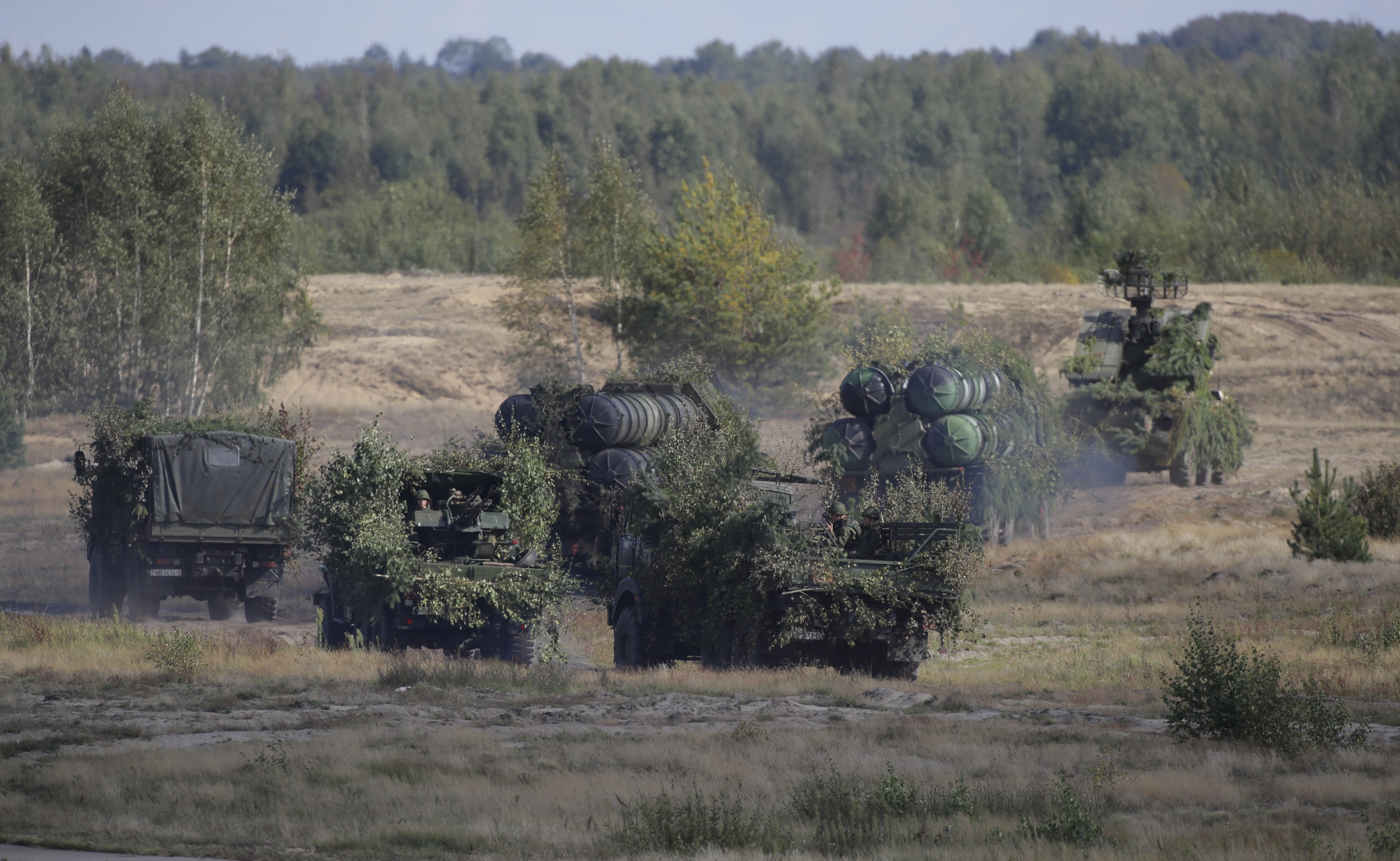 The Zapad 2017 military drills held jointly by Russian and Belarusian militaries at several firing ranges in both countries have rattled Russia's neighbors. (Sergei Grits/AP)
10 of 10 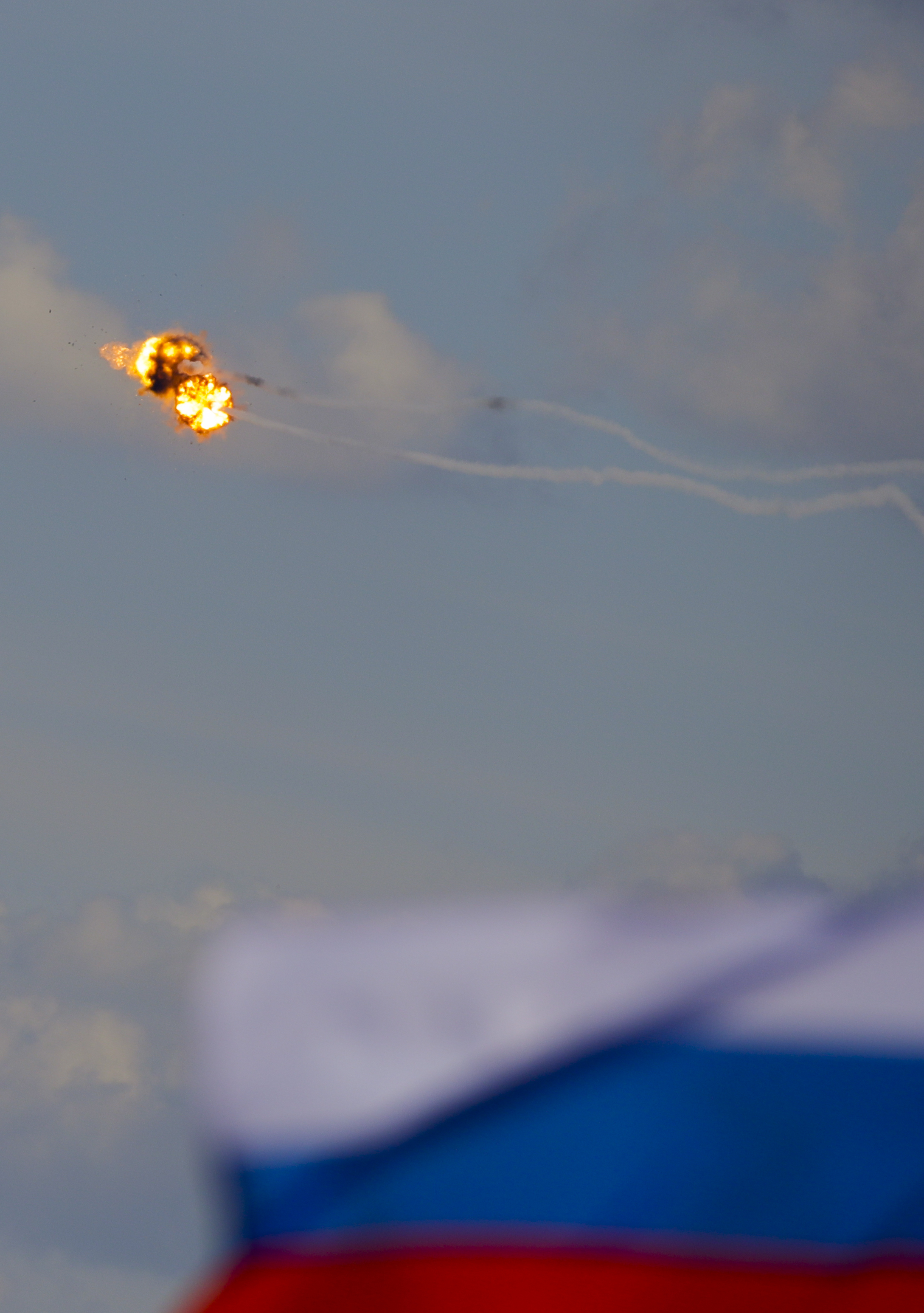 In the initial reaction to the video, the Defense Ministry claimed that the video was not recorded during Zapad 2017, rather “in a different period of time, when Army aviation crews conducted an exercise to destroy ground targets in a tactical exercise.”

According to the Defense Ministry statement, as quoted by Russian news outlet RBC, the video shows the erroneous targeting of a vehicle outside a designated target area. They did not specify when exactly, according to their version of events, the incident took place.

Ultimately, they lashed out at 66.ru, calling the reports “deliberate provocation or someone’s own stupidity.” An unidentified Defense Ministry source quoted by RBC seemed to contradict this sentiment, but it placed the incident on Sept. 16.

The controversy surrounding the alleged Ka-52 mishap comes as the Zapad war game reaches feverous heights. On Sept. 18, President Vladimir Putin traveled to St. Petersburg to witness livefire exercises at a nearby training range and kicked off phase two of the exercises.

Broadly speaking, phase two differs from the first in scope. Phase one, which began on Sept. 14, focused on problems with logistics and preparations for deployment into Belarus to suppress a fictional pro-Western insurgency and hold the line against an attack from the West.

Phase two can be thought of as preparations for a total war scenario against a well-equipped conventional foe in the west — it would not be unreasonable to consider NATO as Moscow’s imagined foe in this scenario.

Motor rifle divisions and airborne units were deployed into Belarus under adverse weather conditions — winter appears to be rearing its head early this year — while Su-24M fighter bombers dropped 250-kilogram bombs on enemy infrastructure and deployments.

On Tuesday, things heated up. According to Defense Ministry press releases, a tank group defended Russian and Belarusian positions against an enemy attempt to break their lines and spearhead deep into the so-called Union State of Russia and Belarus.

“MiG-31BM interceptors were deployed to repulse a simulated enemy attack, during which pilots of the Western Military District and on-duty air defenses intercepted more than 30 aircraft approaching their air defense zone,” one statement read.

The aerial portion of Tuesday’s air defense exercise, at least as related by Defense Ministry statements, focused on MiG-31 intercepts of cruise missiles launched from behind enemy lines — underscoring that this entire exercise is meant to showcase readiness against NATO.