Marine Corps packs are failing in the Arctic

Marines training in the Arctic region of Norway last year reported that many of the Corps’ standard-issue FILBE pack frames were cracking and breaking because of the intense cold and harsh winter environment.

The cold weather-related problems have caught the Corps by surprise and could stall plans to next year issue new ruck frames for all Marines.

The failure of the hard plastic frames also calls into question U.S. preparedness for Arctic operations against adversaries like Russia and China, and whether officials in the Marine Corps had properly vetted the equipment for cold weather operations.

"We are aware of the issue and we are actively working on it," said Capt. Jolanta Krempin, a program officer at Marine Corps Systems Command, which oversees the development and fielding of warfighting equipment.

The problems first emerged in after-action reports filed by Marines who deployed to Norway last May as part of the Black Sea Rotational Force. Additional complaints of pack frame failures came again this January from the Marine Corps Mountain Training Facility in Bridgeport, California.

It is not the first time officials have complained about pack frame breakages from the FILBE packs, which were first issued to Marines in 2011 as part of the ILBE series of rucks that included a durable plastic pack frame.

In 2014, anecdotal stories trickled in of pack frames cracking during airborne operations and at Marine Corps schools, where packs are frequently swapped between students and repeatedly used for training. "Marines were asking to buy different packs because the frames were breaking," said one engineer from Marine Corps Systems Command, also known as SYSCOM.

To remedy that initial problem, officials at SYSCOM conducted tests with a newly designed and reinforced frame.
"We looked at where the breakages were occurring, and we reinforced the vertical structures of the frame," a SYSCOM engineer told Marine Corps Times. 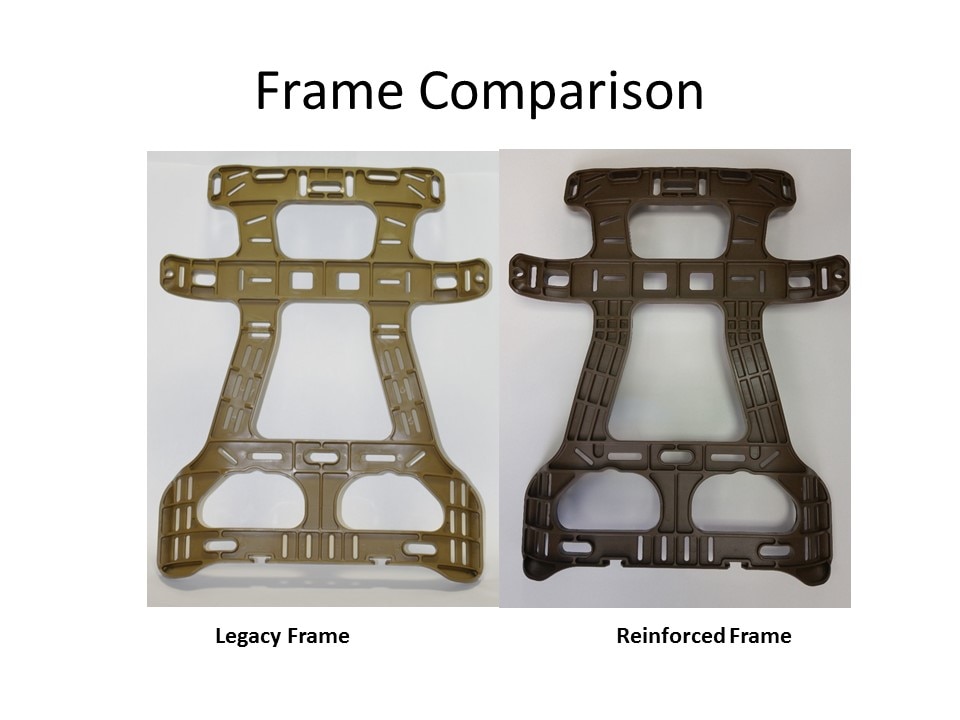 Photo courtesy of Marine Corps Systems Command
The new reinforced frames only added an extra ounce of weight to the pack, but is five times more durable, the engineer said.

To test the new reinforced frames, officials at SYSCOM issued them to Marines at 1st, 2nd, and 3rd Reconnaissance Battalions and subjected the packs to extreme stress through three training courses over six weeks, which included five airborne jumps each course.

SYSCOM even free dropped a pack from 5,000 feet, and "it didn’t have any breakages," said a SYSCOM engineer.

However, the new reinforced version of the FILBE frames were designed before reports of cold weather problems began to flow in last year. "We finalized the frame design before we heard about Norway," said Nick Pierce, a SYSCOM official. 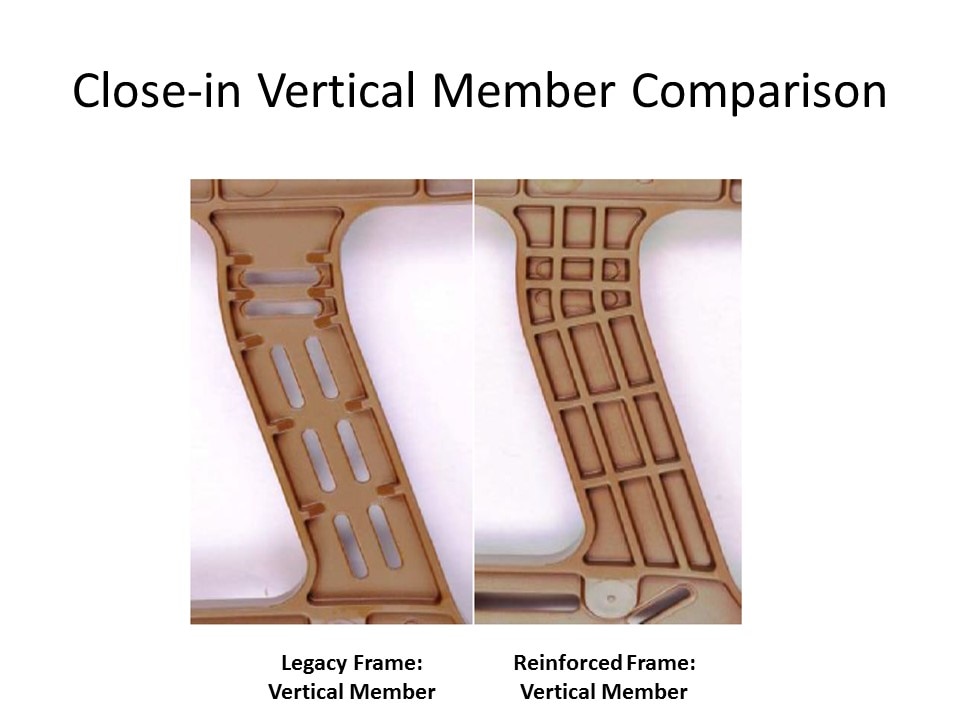 "So far it sounds like the reinforced frames are doing significantly better," Pierce told Military Times.

But before the new frames are fielded across the Corps, more testing and analysis will be needed, Pierce said.

Cold weather is certainly a factor in the frame cracks, Marine Corps SYSCOM officials say, but it is not the only problem. Out at Bridgeport and Norway, Marines "are carrying loads heavier than what most Marines are carrying," Pierce said. The Marine Corps’ FILBE packs are rated to carry 120-lbs of equipment.

The frame cracks from airborne operations and cold weather climates calls into question whether the Marine Corps properly vetted the initial packs before they were fielded in 2011.

The original pack frame’s cold-weather performance was tested in a lab rather than in field by the Marines who would use them.

Barbara Hamby, a SYSCOM spokesman, said the limited testing was done at -40 degrees Fahrenheit by the manufacturer.

"The frames were cooled over a period of several days to ensure an even core temperature." And that testing was conducted under government oversight, she said. 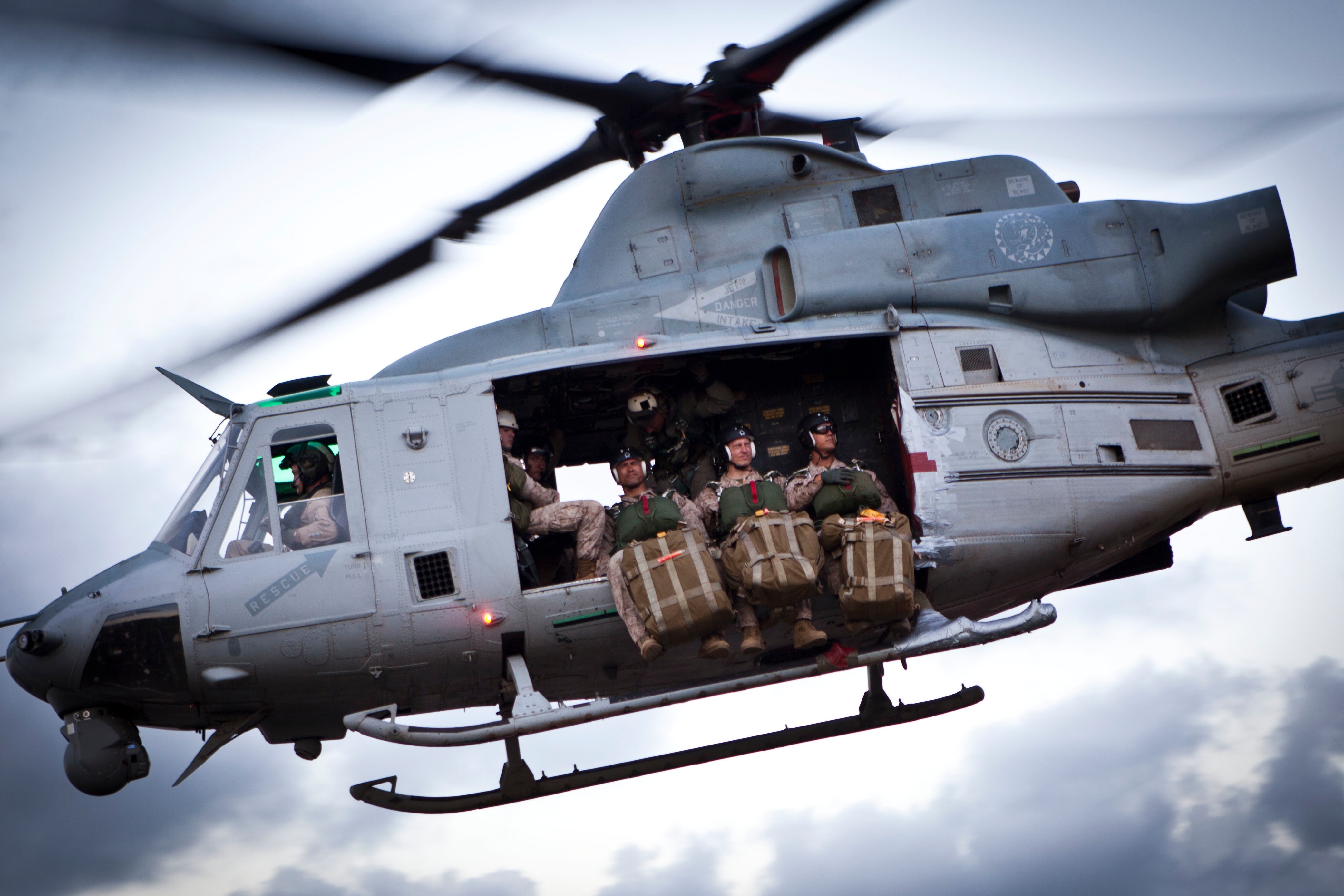 "I am not an engineer, but I have trouble imagining that testing in a lab for a short period of time can properly simulate real world environmental stressors," one military official told Marine Corps Times.

The current field tests with Marines deployed to Norway will help determine whether the reinforced pack frames that were designed several years ago will hold up under arctic conditions.

The Corps hopes to issue the new pack frames over the next year, but that timeline could be derailed if Congress fails to pass a full budget and slows the procurement process.

The pack failures in Norway also highlight a significant problem for the U.S. military’s readiness for confronting Russia and supporting Arctic allies in the region.

"If you have a globe out you realize the Arctic is central to security," said Dr. Rockford Weitz, the director of the Maritime Studies Program at the Fletcher School of Law and Diplomacy at Tufts University.

"It is the shortest route between us and Russia," and vital to U.S. ballistic missile defense and our nuclear second-strike capability from U.S. submarines, Weitz explained.

Global warming and 15 years of receding ice have also created increased accessibility and competition over the region’s abundant natural gas and oil.

"There’s enough there that other countries are paying attention," Weitz said.

The failure of the Marine Corps equipment is a healthy wake-up call, and "a good thing that it is being discovered now," but also not a surprise to Weitz.

The operations in Norway will help the Marine Corps test its equipment and capabilities so it can adapt to fighting in colder climates, something the Corps has not had to do in the past.

"We are coming to terms that we need to improve our Arctic readiness," Weitz said.
About Shawn Snow

Thomas Robertson will get credit for the 13 months he has already spent in custody.

3D animation shows the inner-workings of an AR-15

The video explains why the rifle is such an efficient, and ultimately dangerous, weapon.

3M sold its Combat Arms earplugs to every branch of the armed forces, but design defects may have caused hearing loss for service members.

A lawsuit against the former vice chairman of the Joint Chiefs could now go to trial.

“Everyone carries a cell phone...it’s a tool, [but] it can also be used as a weapon."

Scandals in US adviser brigade alarm leaders behind closed doors

Army officer’s assault suit against police can proceed to trial