MOSCOW ― The wait is finally over. Zapad 2017, a Russian-led strategic military exercise that has been the focus of Western anticipation and outright hysteria for months now, kicked off Thursday in Belarus.

For the next week, all eyes will be cast just over NATO’s Eastern flank; Zapad will tell us much about the status of Russian military modernization and reform.

But key insights will likely have to wait until the second phase of the exercise, set to begin Sept. 17. For the next three days, Russia and its ally Belarus will focus on logistical tasks ― such as mobilizing for combat. Once mobilized, the combined force of some 10,000 declared troops (of which only 3,000 are Russian) will begin to wrestle with a brewing insurgency in Belarus.

There is, of course, no real insurgency in Belarus, though Zapad is in itself meant to ensure that fact remains true. The combined force will be tasked with pacifying a pro-Western separatist movement with the fictional name of Veishnoria. It is a trial run against one of Russia’s greatest fears: a repeat of the 2014 Ukrainian maidan movement in Belarus, its last Western buffer. 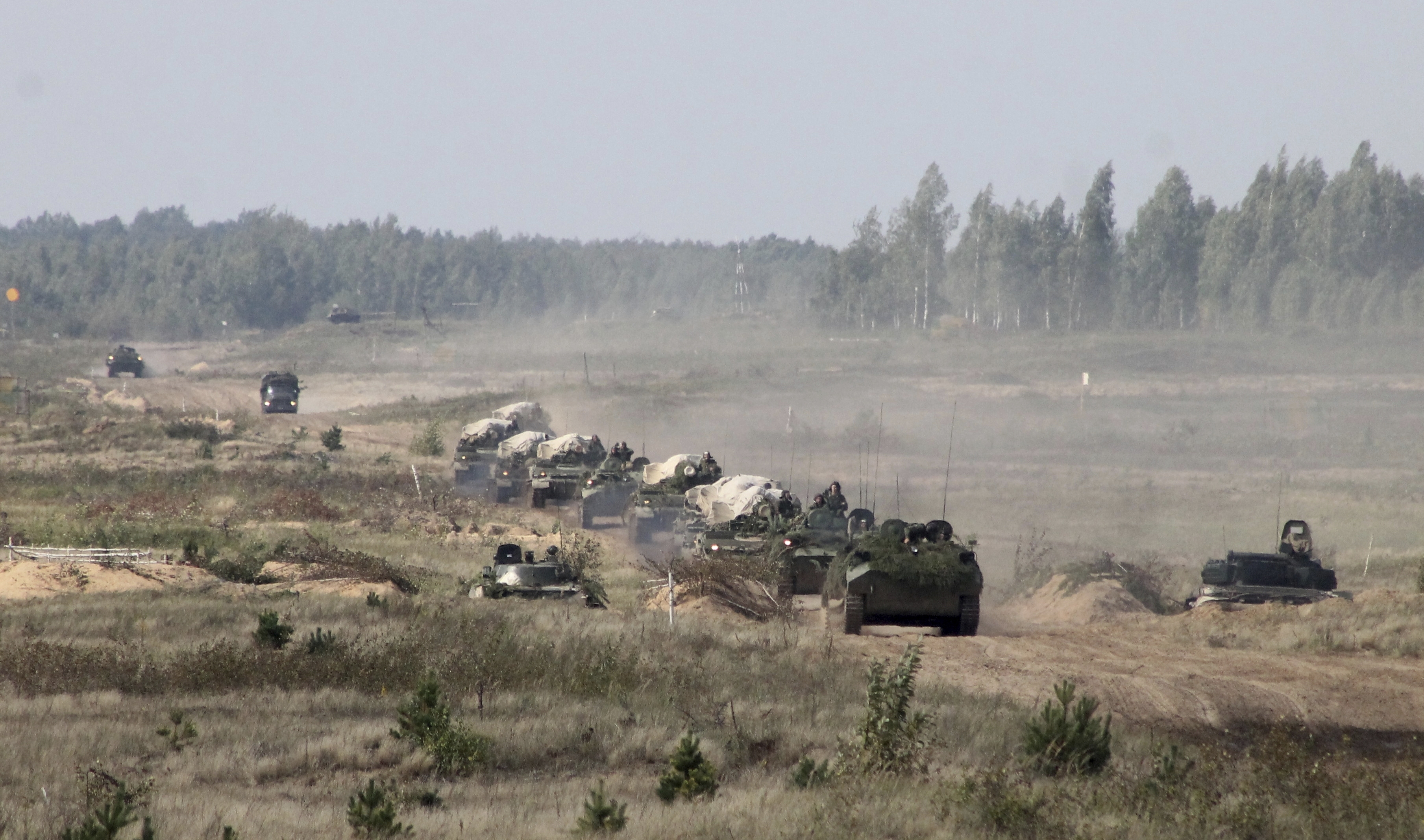 A military convoy arrives to a training ground at an undisclosed location in Belarus on Sept. 11, 2017. NATO and neighboring countries have expressed concern over the war games. (Vayar Military Agency photo via AP)
2 of 10 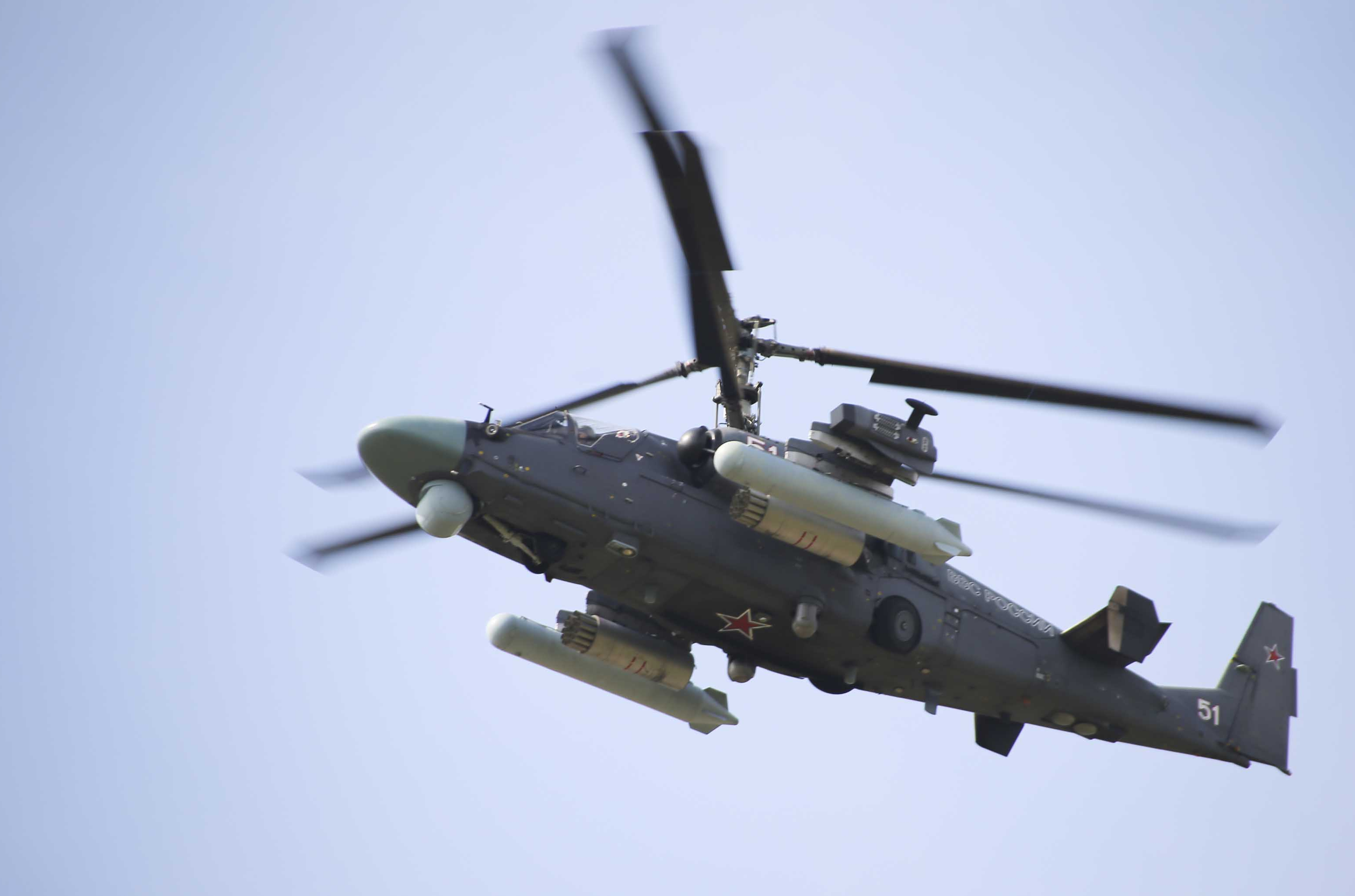 A Russian military helicopter flies over a training ground at an undisclosed location in Belarus on Sept. 12, 2017. Military officials in Belarus have sought to calm Western fears about Zapad. (Vayar Military Agency photo via AP)
3 of 10 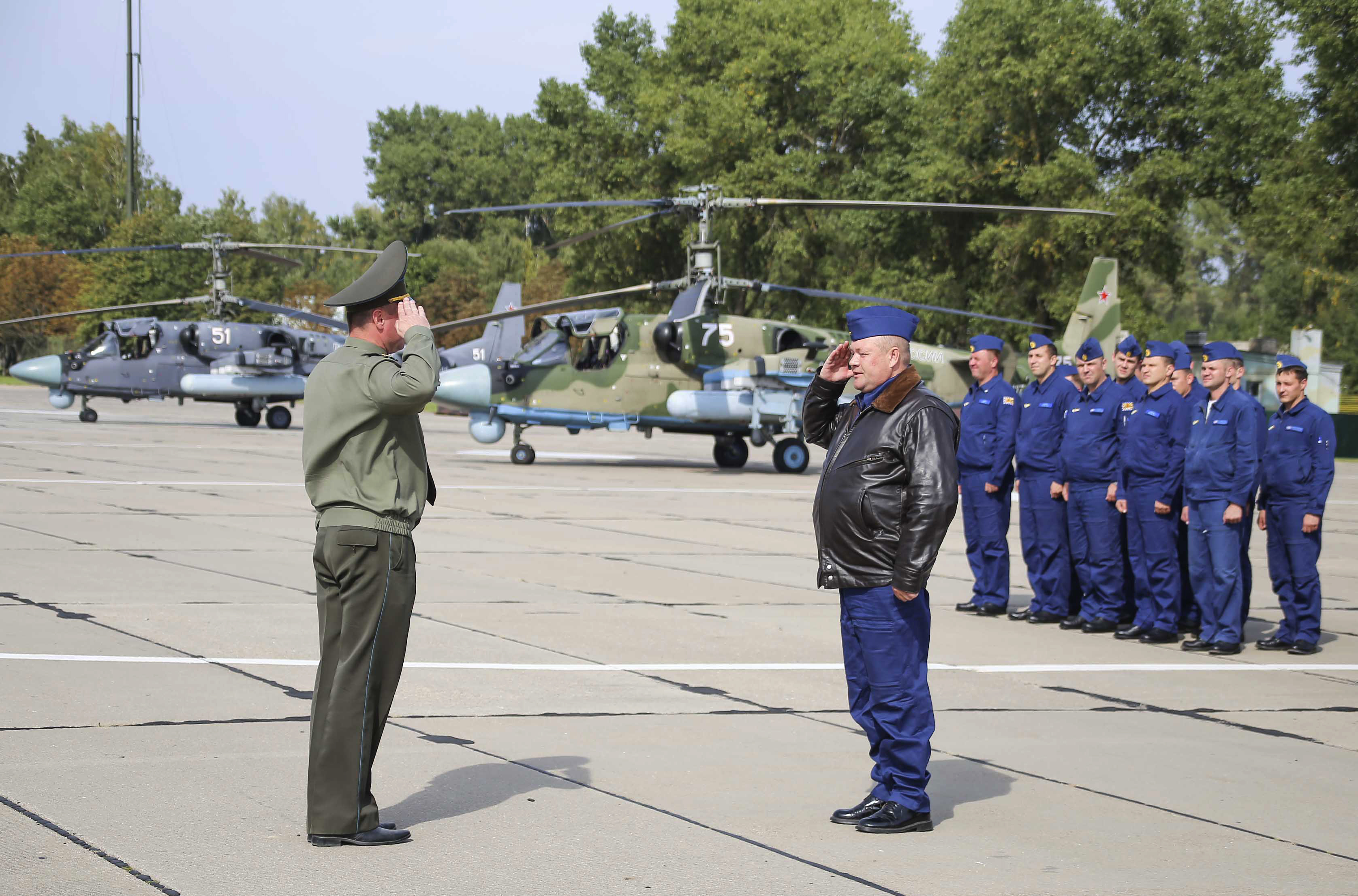 Russian military pilots, right, report upon arrival at an air base in Belarus prior to the start of Zapad 2017. (Vayar Military Agency photo via AP)
4 of 10 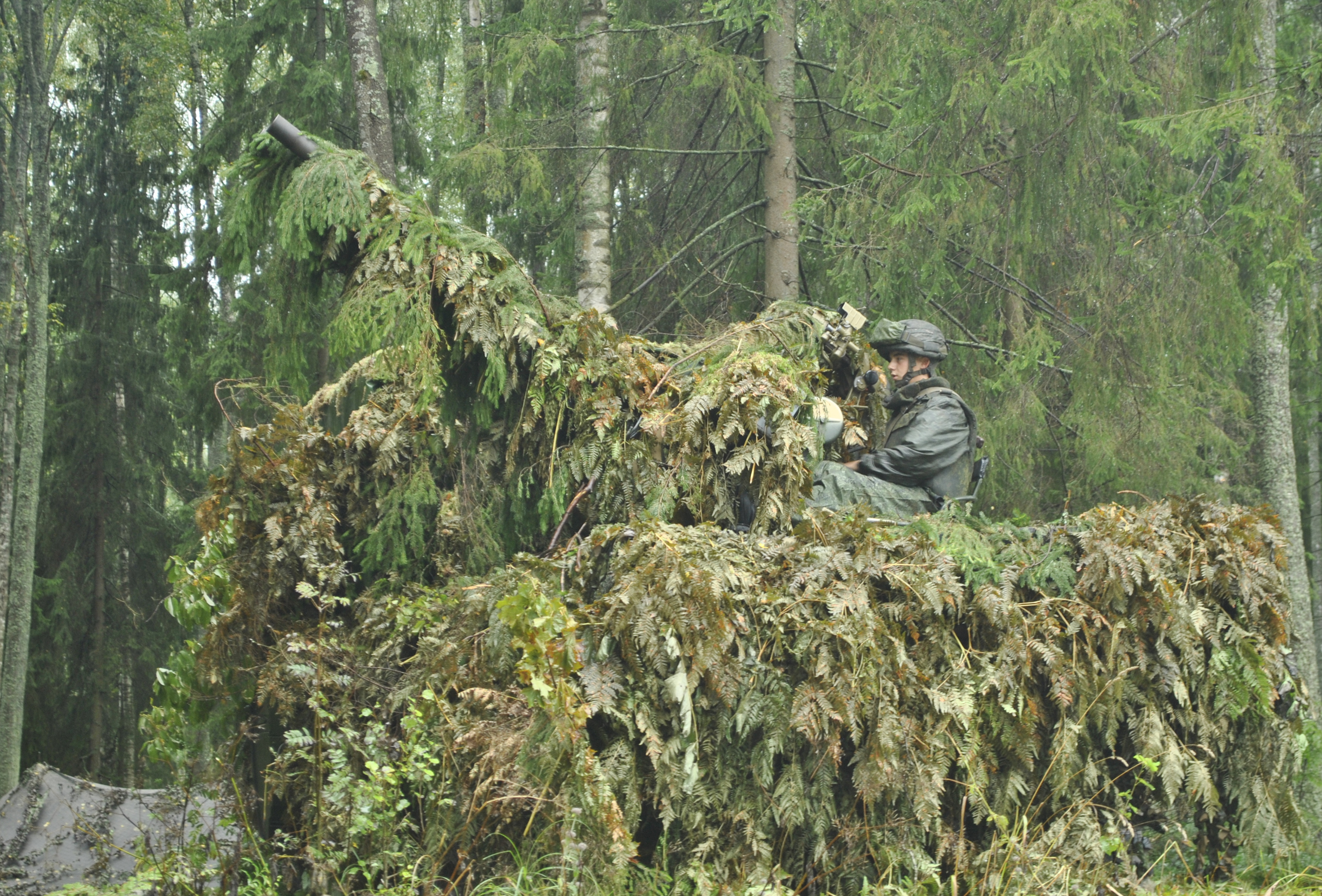 A soldier with the Belarus military aims his anti-aircraft gun at a training ground at an undisclosed location in Belarus on Sept. 13, 2017. (Vayar Military Agency photo via AP)
5 of 10 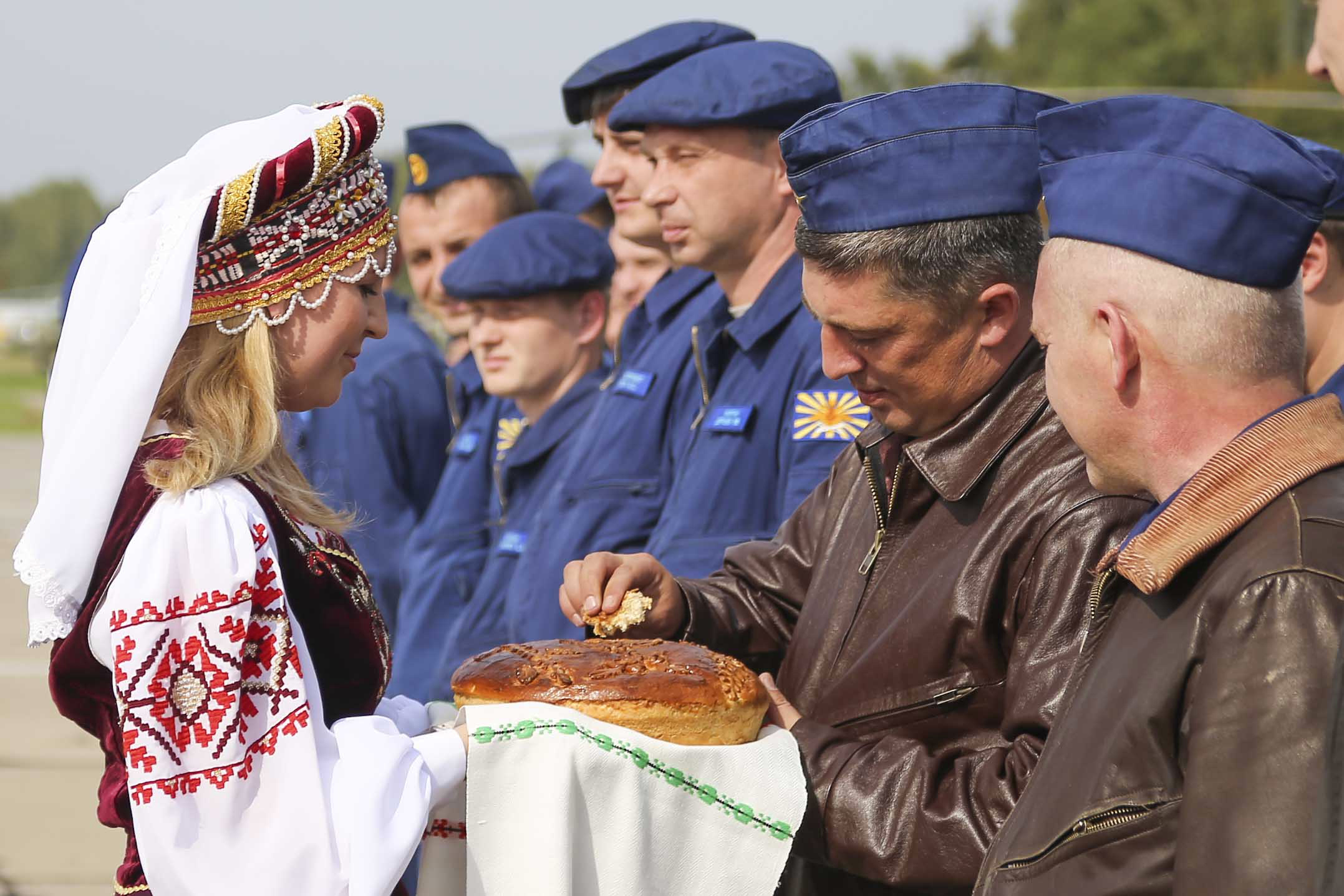 Russian military pilots are presented with bread and salt as they arrive at an air base at an undisclosed location in Belarus on Sept. 12, 2017. Russia and Belarus are holding a massive war game, Zapad 2017, which states Sept. 14, 2017, near the borders of Poland, Estonia, Latvia and Lithuania. (Vayar Military Agency photo via AP)
6 of 10 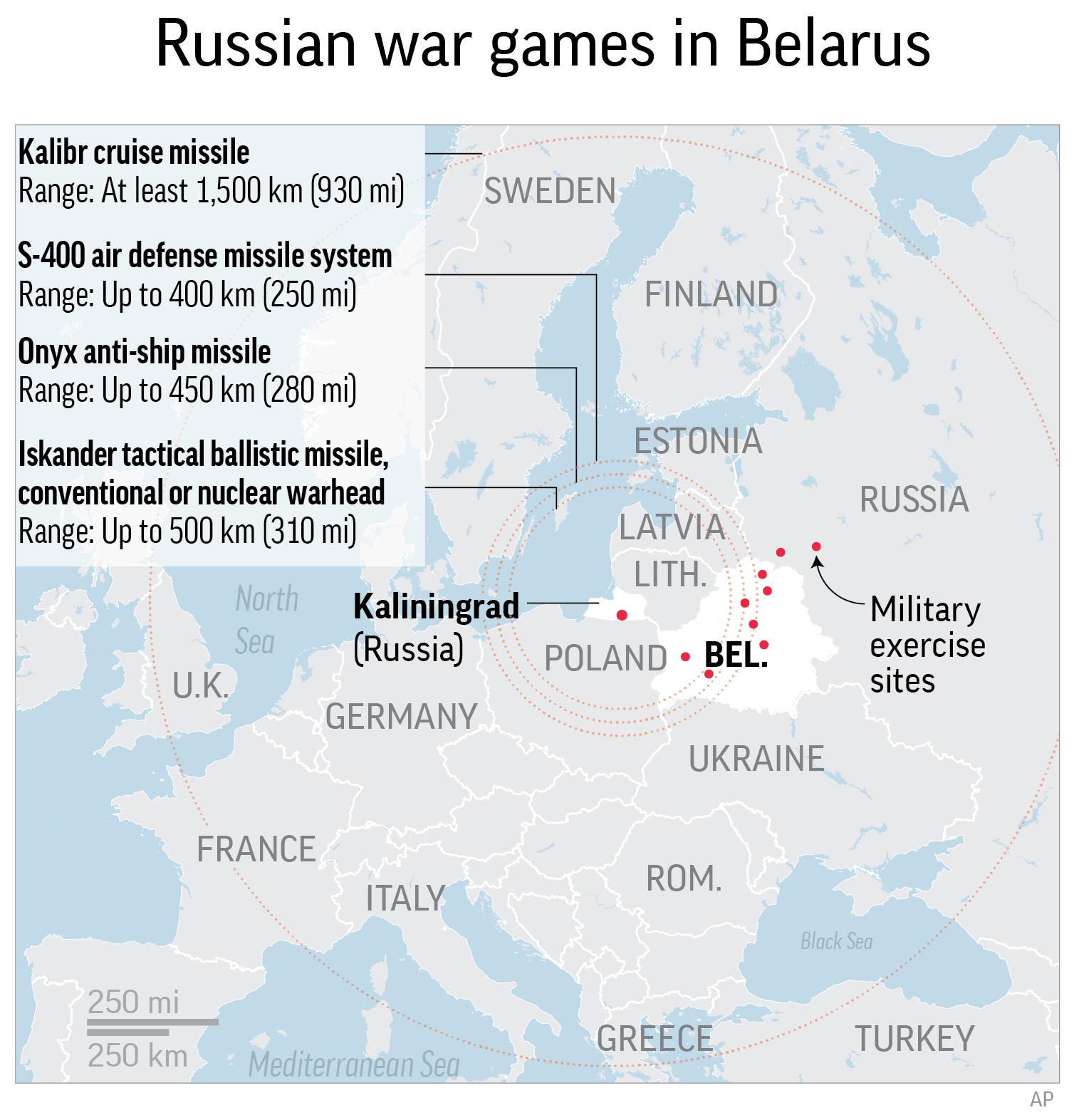 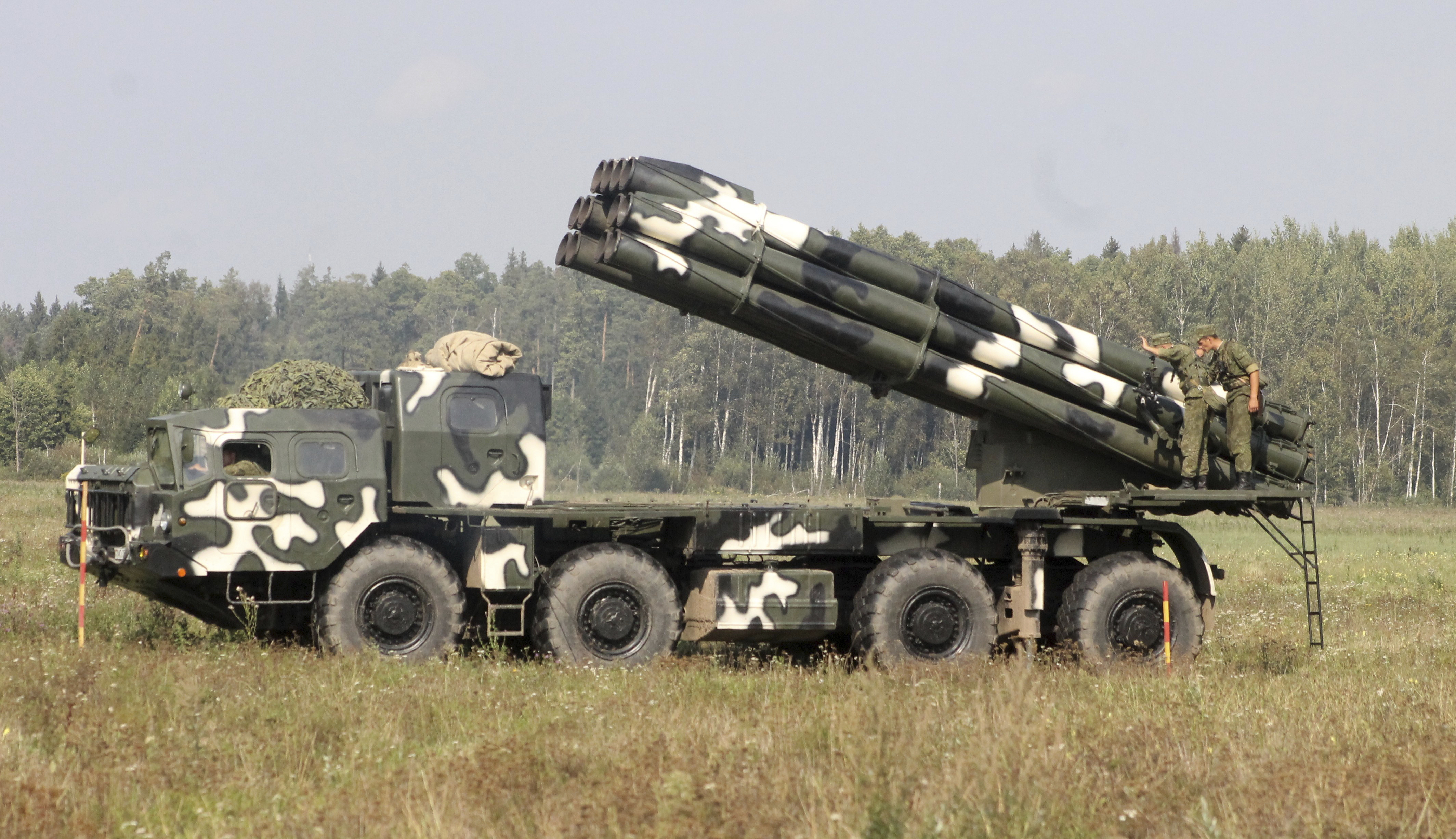 A multiple-launch rocket system vehicle is being prepared at a training ground in Belarus prior to Zapad. (Vayar Military Agency photo via AP)
8 of 10 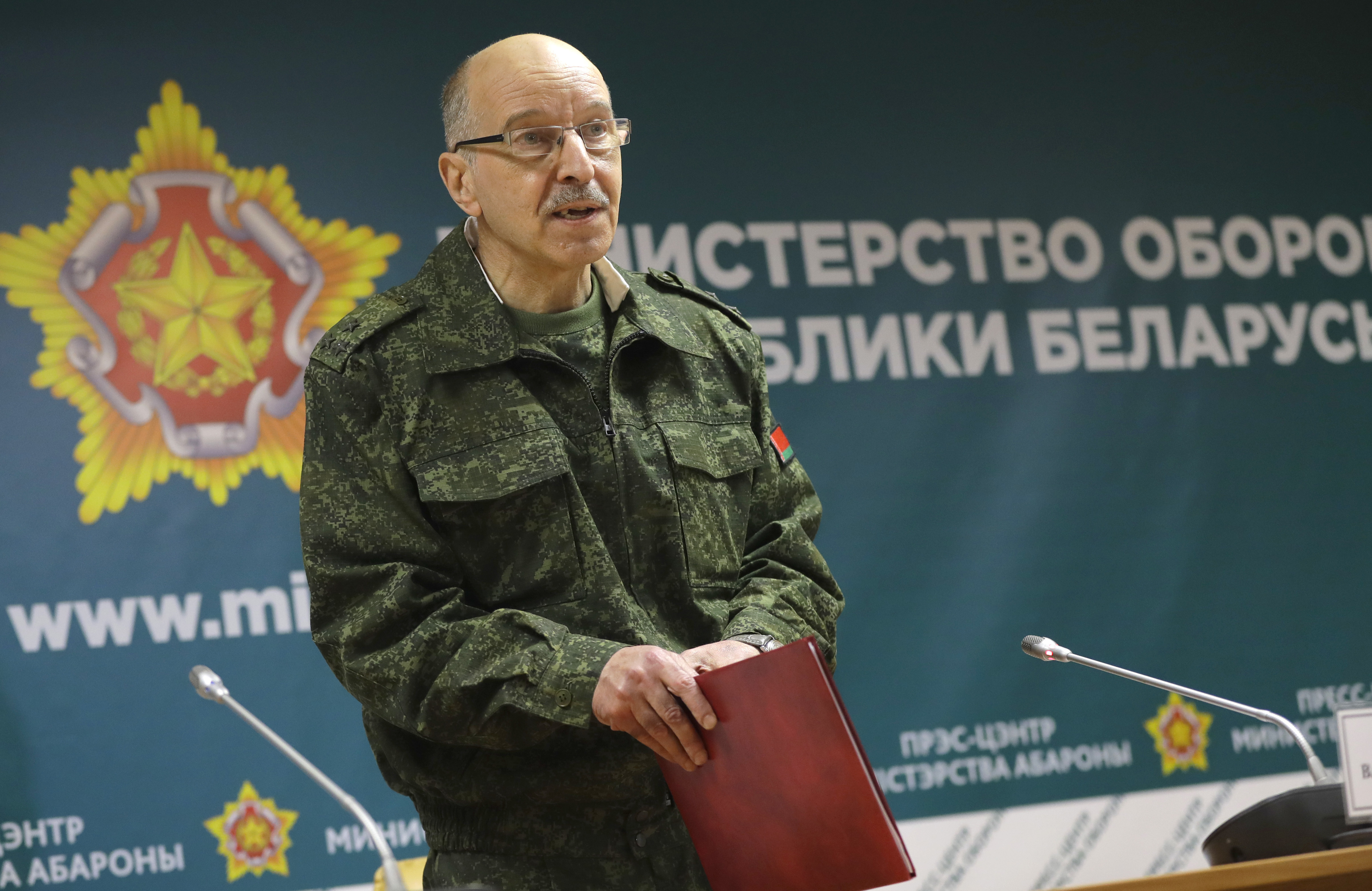 The official representative of the Belarusian Ministry of Defence, Col. Vladimir Makarov, addresses the media during a briefing in Minsk, Belarus, on Sept. 14, 2017. Zapad involves thousands of troops, tanks and aircraft. (Sergei Grits/AP)
9 of 10 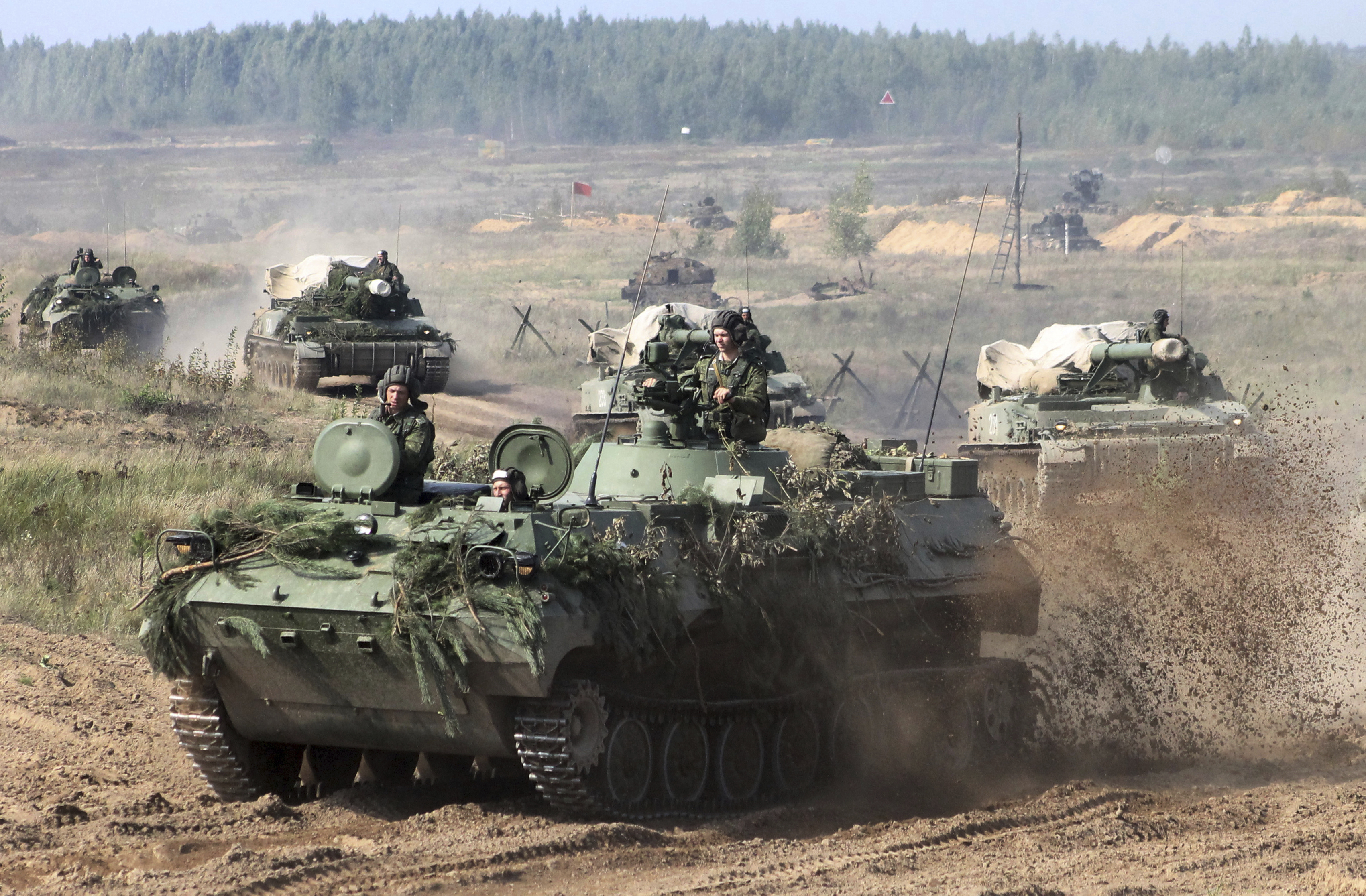 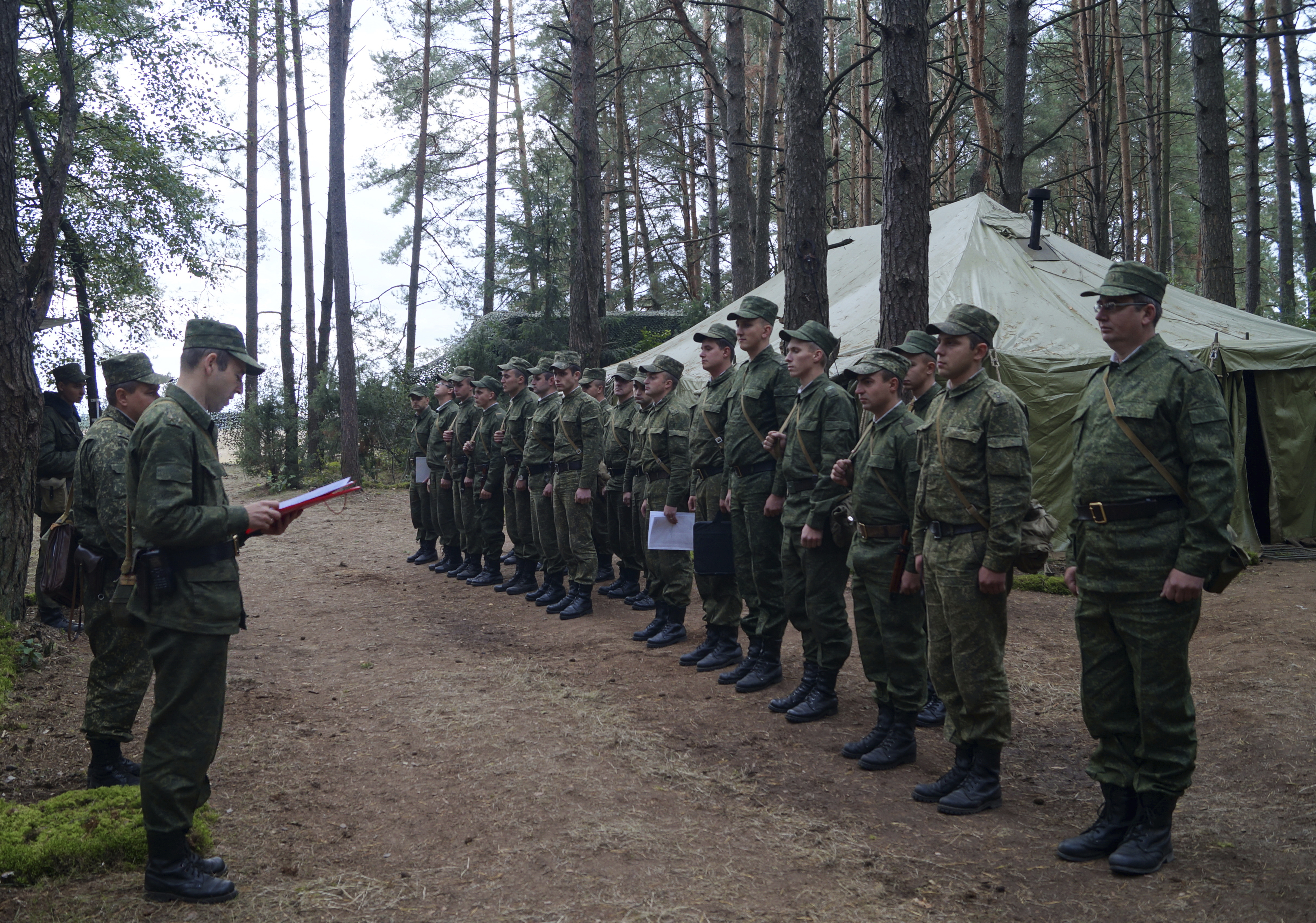 Belarus' Col.Alexander Prokopenko, left, reads his order to start the drills at a training ground at an undisclosed location in Belarus on Sept. 14, 2017. (Vayar Military Agency photo via AP)

But the exercise is bigger than that. Four years after the last time Russia and Belarus ran the 2013 Zapad exercise, much has changed ― both within the Russian military and between Moscow and the West. Relations between Russia and the West have hit lows unseen since the Cold War. And after Russia’s 2014 intervention in Ukraine, many in the West warily look upon Moscow.

Zapad will be a big test for the Russian military. This is the first major exercise in which the Baltic Fleet command structure will participate ― ever since the entire staff was fired last year ― as well as new and reconstituted units from Russia’s Western military district. Overall, Moscow is testing its ability to rapidly mobilize and deploy a combined force to its Western frontier.

Russia is preparing to kick off its wargame exercises – just as east-west relations are at their most strained since the fall of the Soviet Union.

Get the latest news in training and simulation technologies

Preparations and smaller-scale exercises leading into Zapad have been taking place throughout the year. The heightened activity has rattled nerves in the West, with some officials and observers claiming Russia has been disingenuous about total troop numbers involved. Others have suggested Zapad will serve to cover permanent deployments to NATO’s borders.

Some predictions have been even more dire: Zapad marks the first stage in a coming Russian move against NATO’s Eastern flank, or against Ukraine. This was stated by Ukrainian President Petro Poroshenko on Sept. 7. To be sure, Russia used exercises in 2008 and 2014 to cover moves against Georgia and Ukraine, giving credence to such arguments.

For NATO to meet its modern requirements, nations need to align their national priorities with guidance from the military alliance, a top official argued Wednesday.

But Russia and Belarus insist that Zapad 2017 is nothing more than an exercise. When the second phase of Zapad 2017 kicks off this Sunday, the combined force will practice defending positions against an unnamed military force. Wit this, Russia will be sending a message to NATO: We have the capabilities to hold our ground if you try anything.

Ultimately, Zapad is a message.

In the lead-up to Zapad, that message seemed to be spectacularly received. The hype surrounding Zapad is likely exactly what the Kremlin wanted: a wave of hysteria hyping Russian military capabilities where they may or may not exist. In the words of Finnish Defence Minister Jussi Niinistö, Zapad is primarily a propaganda exercise.

“Western countries have taken the bait completely, they’ve plugged the exercises so much,” he told the Finnish Yle news agency on Monday.

The variety of exercises before, and some that are continuing elsewhere in Russia during Zapad, have led some Western officials to estimate that Russia is conducting an exercise with some 100,000 troops involved. But this number depends on selective accounting. As part of Zapad, Russian civilian and law enforcement organs are practicing wartime duties.

These observations have been the focus of intense speculation in the West. But now that Zapad is here, it is time to watch and learn.