BEIRUT — The U.N. envoy for Syria said Thursday that a cease-fire was "largely holding with some exceptions," as opposition activists reported a mounting number of government airstrikes, including a raid in the northern Aleppo province that killed at least six civilians.

Speaking to reporters in Geneva, Staffan de Mistura said he was concerned that fighting northwest of Damascus that has cut off the capital's clean water supply would further escalate and derail proposed negotiations between the government and the opposition in Astana, Kazakhstan, later this month.

The talks are sponsored by Russia and Turkey, which support opposing sides of the Syrian civil war. But the status of the meeting, planned for Jan. 23, is not clear. Rebels say the government's continued campaign for the Barada Valley, the capital's main source of water, has cast the talks in doubt.

The U.N. says the capital has suffered from a water shortage affecting 5.5 million consumers since December 22. 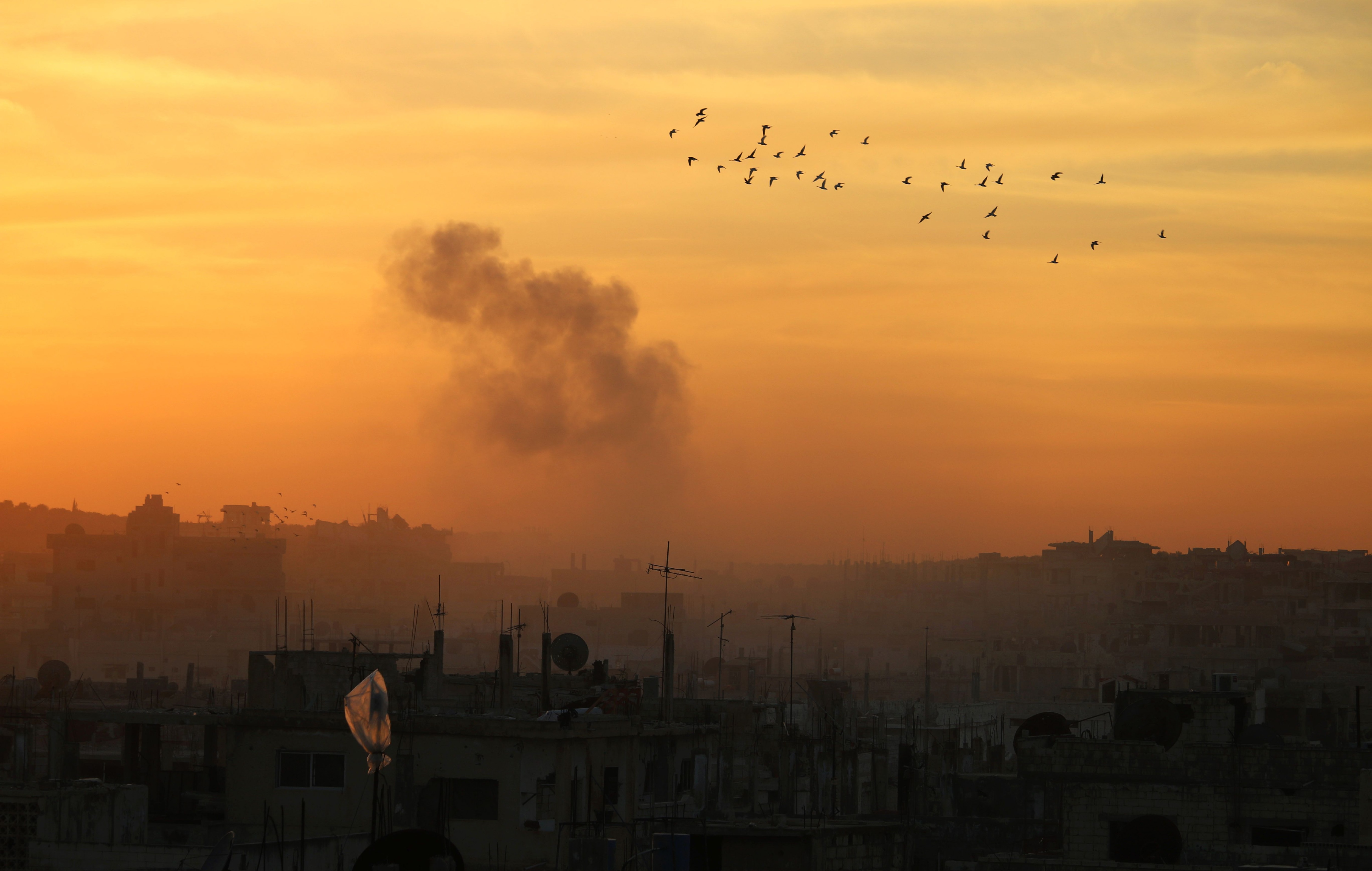 Smoke billows from a rebel-held area of Daraa, in southern Syria, following reported shelling by pro-government forces during sunset on January 12, 2017.
Photo Credit: Mohamad Abazeed/AFP via Getty Images
The leader of one of Syria's largest rebel factions, the ultraconservative Ahrar al-Sham, said in remarks aired Thursday that the violence in the valley and daily airstrikes on rebel-held areas "are signs of a collapsing truce."

De Mistura said five villages in the Wadi Barada area have reached an "arrangement" with the government, but two villages, including one which holds the source of water, al-Fijeh, have not.

"There is a danger, a substantial danger, imminent danger, that this may develop into a further military escalation," further imperiling the water supply, he said.

He also said the cease-fire, which came into effect Dec. 30, should widen humanitarian access to besieged areas, but that "unfortunately, that is not the case."

The opposition-run Syrian Civil Defense, a search and rescue group also known as the White Helmets, said its workers pulled the bodies of three children and three adults from the rubble of an airstrike on the village of Babka in the opposition-held countryside west of the once-contested city of Aleppo.

It was not clear who was behind the raid and others like it in the Aleppo countryside. Syrian and Russian aircraft regularly bombed the province before the cease-fire went into effect. The U.S. is believed to be behind a series of strikes in the neighboring Idlib province that activists say have killed several Al-Qaida-linked militants.

The Britain-based Syrian Observatory for Human Rights reported four children among the dead.

The raid followed a day of strikes on two opposition pockets outside the capital, Damascus. The strikes on the Ghouta region, where pro-government forces are waging a ground offensive against rebels, were the first since the cease-fire came into effect, according to the Observatory. Another six civilians were killed in an airstrike on the Barada Valley Wednesday.

A Syrian boy runs while carrying bread following a reported airstrike by government forces, in the Syrian town of Binnish, on the outskirts of Idlib, on January 12, 2017.

It is not clear how the ongoing violence may affect the talks expected on Jan. 23 in Astana, Kazakhstan. Little is clear about what is on the agenda of the negotiations or who will be attending.

"We had clearly rejected this truce because it is tied to an unspecific political solution that we were not part of drafting," Ali al-Omar, the head of Ahrar al-Sham, said in his first recorded interview, which was posted online. "The guarantor is Russia, an occupying force to Syria that came in support of the regime. Additionally, other factions were excluded from this truce, which is a pretext" for continued attacks by the government and its allies.

The government says the Fatah al-Sham Front, an al-Qaida-linked group allied with Ahrar al-Sham, and the Islamic State group are excluded from the truce. Moscow has pushed for declaring Ahrar al-Sham a terrorist group, despite the fact that it is taking part in a Turkey-backed operation against the IS group in northern Syria.

The Russian military said Thursday it had sent four warplanes to Syria and withdrawn six others as part of an ongoing rotation of forces.

Defense Ministry spokesman Maj. Gen. Igor Konashenkov said six Su-24 bombers have flown back to Russia and some other warplanes are preparing to leave the Hemeimeem air base in Syria's coastal province of Latakia.

At the same time, Konashenkov said that four Su-25 ground attack jets have arrived at Hemeimeem, which serves as the hub for the Russian air campaign in Syria.

In December, Russian President Vladimir Putin ordered the military to scale back its presence in Syria. Russian aircraft carrier Admiral Kuznetsov and accompanying ships left the eastern Mediterranean last week and are heading back to their home base.

The Pentagon will deliver the first two National Advanced Surface-to-Air Missile Systems, or NASAMS, to Ukraine in the next two months.

It is National Suicide Prevention Month, but the work to prevent suicides must be at the front of our minds far beyond September.

The web application was developed at the Army Software Factory.

Charges of acting as an illegal agent carry a maximum prison sentence of 10 years.