By Jari Tanner, The Associated Press
US Deputy Secretary of Defence Robert Work, right, and chief of staff of the Finnish Ministry of Defence Jussi Niinisto, react during a media conference in Helsinki, Finland, Friday Oct. 7, 2016. Finland and the United States have signed a bilateral defense cooperation pact pledging closer military collaboration at the time when the Nordic country is increasingly concerned over Russia's activities in the Baltic Sea region. (Jussi Nukari / Lehtikuva via AP) FINLAND OUT - NO SALES

HELSINKI — Finland and the United States have signed a bilateral defense cooperation pact pledging closer military collaboration at the time when the Nordic country is increasingly concerned over Russia's activities in the Baltic Sea region.

The deal was signed in Helsinki on Friday by the U.S. Deputy Secretary of Defense Robert O. Work and the Finnish Defense Minister Jussi Niinisto.

While Washington and Helsinki already closely cooperate through joint military drills on air, land and sea, the non-legally binding pact seeks to deepen the ties through information exchange, joint research and development in areas like cyberdefense and training among other things.

The pact covers cooperation in ship building, nuclear defense and developing technologies for the Arctic - an area of increasing interest for both nations.

In the three-page declaration, the U.S. and Finnish defense ministries jointly state that "the U.S. presence in and around the Baltic Sea undergirds stability in the region, and creates opportunities to increase defense cooperation between our countries."

As a stark reminder of the military realities in the region, Niinisto said earlier Friday that Finland suspects that Russian SU-27 fighter jets violated the country's airspace on two separate occasions in the Gulf of Finland on Thursday.

The claim was quickly denounced by Russia's defense ministry which, as quoted by news agency TASS, said the planes flew over international waters "in strict compliance with the international regulations."

While the Finnish media speculated that the air intrusion may be related to Work's visit, others claimed it was caused by an ongoing air drill by Russian air forces in the region.

Finnish Prime Minister Juha Sipila considered it "serious" that two such incidents took place on the same day, and urged a thorough investigation.

Estonian national broadcaster ERR reported that Russian military has been transporting short-range Iskander missiles by sea to the Baltic Sea enclave of Kaliningrad this week complete with substantial air escort - something that could explain intrusions on the narrow international air strip on the Gulf of Finland. 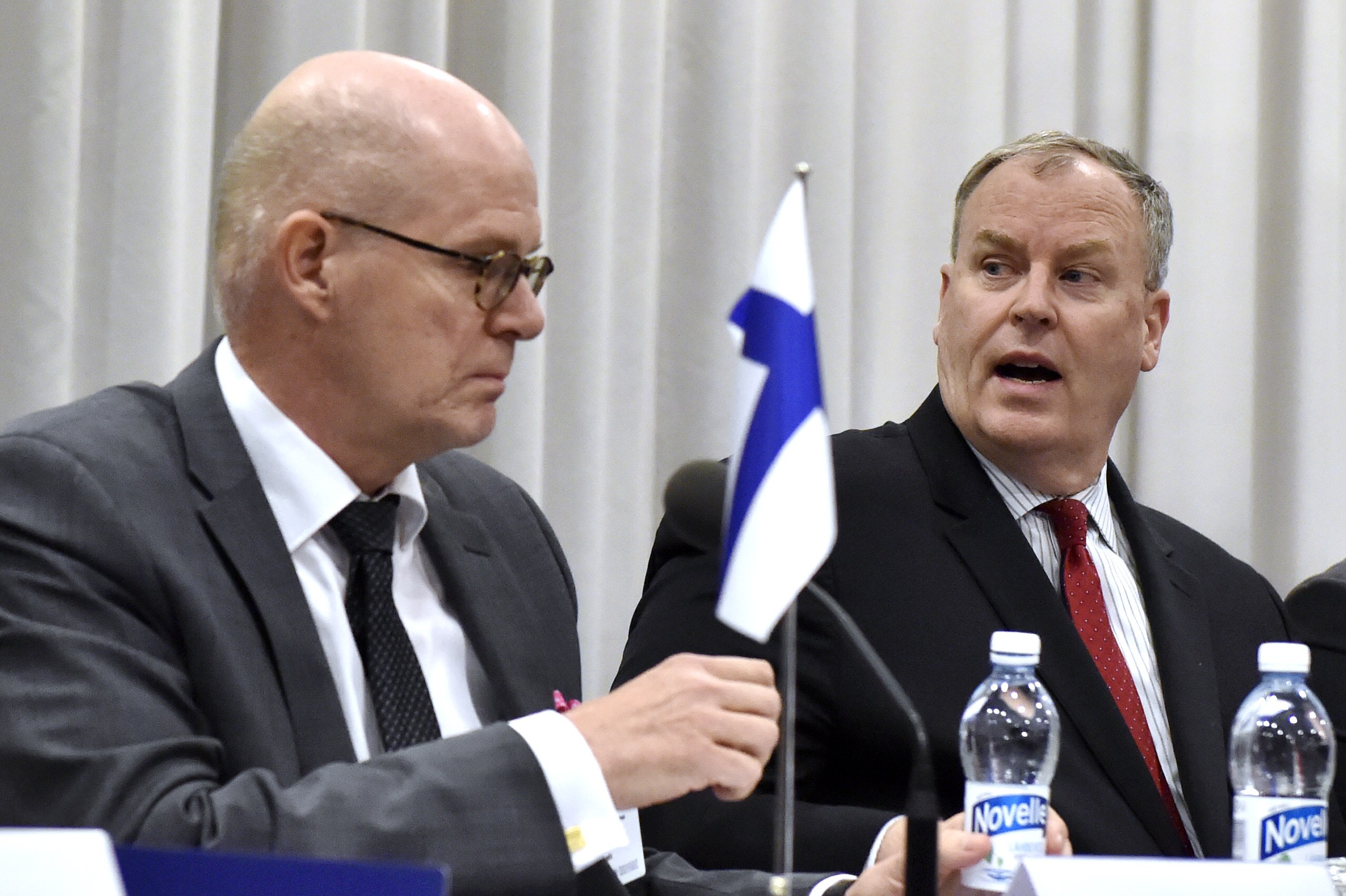 Deputy Secretary of Defence Robert Work, right, and chief of staff of the Finnish Ministry of Defence Jussi Niinisto, react during a media conference in Helsinki, Finland, Oct. 7, 2016. Finland and the United States have signed a bilateral defense cooperation pact pledging closer military collaboration at the time when the Nordic country is increasingly concerned over Russia's activities in the Baltic Sea region.
Photo Credit: Jussi Nukari/Lehtikuva via AP
Estonia's military reported separately that a Russian SU-27 fighter plane had violated its airspace early Friday for less than one minute.

The United States has expressed concern over what it says is Russia's aggressive and reckless behavior on the Baltic Sea, where Finland, Sweden, Estonia and Latvia - among other nations - have reported air violations and there has been other activity by Russia's military near U.S. aircraft and ships.

During his one-day Helsinki visit Work met with Nordic and Baltic defense officials in a regular gathering to discuss regional defense issues, including Russia's recent maneuvers.

"Unfortunately these (Russian air intrusions) are becoming a norm rather than an exception," Work told a news conference after the meeting. "It's hard for me to fathom that Russia would consider Finland a threat in anyway, and activities like these are hard to understand."

Non-NATO members Finland and Sweden each struck such a defense cooperation deal also with Britain earlier this year.