By Michelle Tan
Trainees high crawl through the mud on an obstacle course during Army Basic Combat Training at Fort Jackson, S.C. The nine-week course designed to transform young American volunteers into Soldiers. Photo courtesy of the Department of Defense.

Basic combat training gets tougher Oct. 1, when the Army rolls out a battery of tests mandatory for graduation. These aren't written tests, but trials in the field. Soldiers may be asked to load and unload an M249 machine gun, treat an open chest wound or use their rifle as a bludgeon.

Also new: peer evaluations and a 16K ruck march with a time limit as part of the final test.

With tougher standards, officials also expect more failures and an increase in recruits getting "recycled," and having to re-take portions of the course.

The changes to basic come as the Army transitions from the wars in Iraq and Afghanistan, said Command Sgt. Maj. Dennis Woods, the senior enlisted soldier for the Center for Initial Military Training.

The Army has brought back "phase testing," which means soldiers will have to pass a test at the end of every phase before they are allowed to move on. The last time the Army featured phase testing in basic training was prior to 2004, Hamilton said.

Trainees have "always been evaluated by the drill sergeants, but with the phase testing, we've added key training events that soldiers will be assessed on," he said.

Recruits clean their M16s in their company bay on March 15 during the white phase of basic combat training at Fort Jackson, S.C.

Soldiers who can't successfully meet the standards can be recycled, he said. Trainees also can be recycled for character or conduct issues, he said. The Army is "unchained from the 10-week model," Wood said, and "we intend to see a few more [recycles] through phase testing."

Soldiers can still can be discharged for failure to adapt or indiscipline.

Sometimes, a group that works together well will pull along the weakest person on the team, he said.

"What we're expecting is individual mastery of these skills," Woods said. "Sometimes if you get too tight on a team, they carry you across, and when that individual gets to their first unit of assignment, they can't do the job."

At the end of the red phase, soldiers must successfully complete four out of five tasks in order to move on.

The soldiers' company commander chooses the five tasks, and they could include evaluating a casualty, performing a functions check on an M16 or M4, reciting the Army values, and demonstrating knowledge of military time.

"They've got to get through that gate to get to white phase," Hamilton said.

Those who pass the red phase will earn a patch, a newly created incentive for soldiers.

"To signify he's passed that particular gate," trainees will receive and be allowed to wear the Army patch, Walthes said. The Army patch can be worn until a soldier moves on to his or her unit in the force. It's the same patch worn by soldiers assigned to Army headquarters, including Chief of Staff Gen. Mark Milley.

Recruits who clear Phase 1 of Basic will be able to wear the U.S. ARMY patch.

With this addition, successful trainees can earn something at the end of each phase. Soldiers already earn the marksmanship badge for white phase, and the beret at the end of the course.

Soldiers who don't meet the requirements could be recycled to another platoon to re-do the phase, Hamilton said.

At the end of the white phase, soldiers must successfully complete seven out of nine tasks in order to move on.

Tasks could include qualifying on your weapon, throwing a live grenade, and completing a tactical foot march.

"The rigor increases as they progress through the course," Hamilton said.

In the blue — and final — phase, soldiers "take all the skill sets they've learned and they're evaluated on their performance by moving to the field," said Jim Walthes, the chief proponent for basic combat training.

Soldiers must then complete 18 out of 20 tasks in order to graduate, he said.

"This is called the end-of-cycle test," he said, adding that it is in addition to the field training exercise.

The near-10-mile road march, which may be incorporated in the final exercise, is a new addition to basic training. It also is a requirement for graduation, Walthes said.

"If you don't complete the 16K, you won't graduate," he said, adding that the march must be completed in less than six hours.

This addition means soldiers are now required to complete four road marches — a 4K, 8K, 12K and 16K — throughout the 10-week basic training.

Other required training includes a weapons immersion program and a combatives course on rifle fighting techniques.

The idea is to teach soldiers how to use their weapon as a less-lethal option, where "they may use their rifle as a striking weapon with a smash to the face or a jab with the barrel," Woods said. "But you can also use it to block and push."

The Army also will introduce peer evaluations, a tool that has long been used in Ranger School and the military academies, to basic training, Woods said.

"We're applying some of that to basic training as a method for helping the young soldiers see themselves," he said. "What it also does for us is it gets to the character issue. The people you work with, they'll know more about what you're doing than the instructor or drill sergeant will. This helps us uncover those who are half-stepping or are spotlight Rangers."

The peer evals likely will be conducted at the squad level, and it could happen during every phase or more sporadically throughout basic training, Woods said. 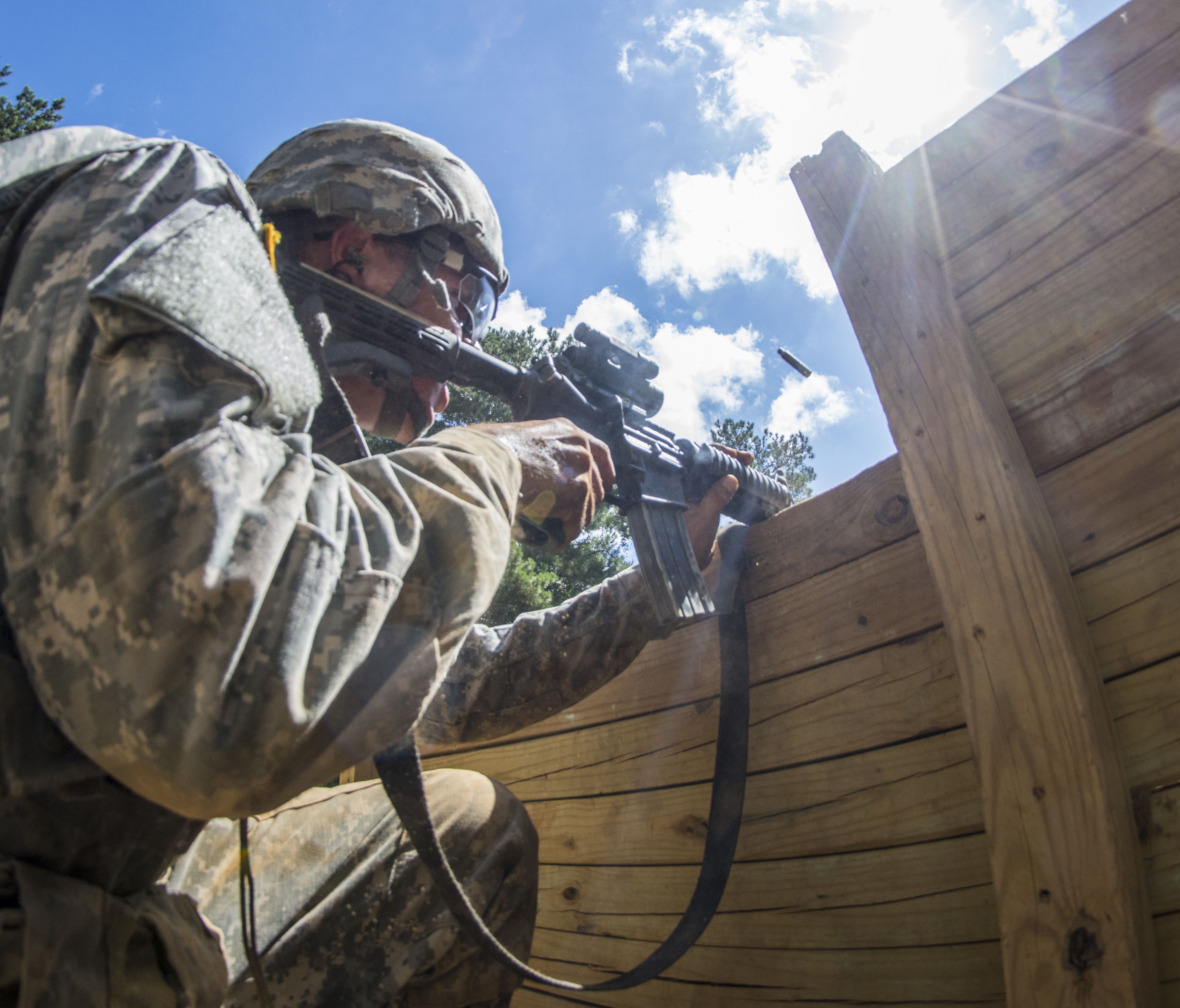 The revisions have been in development for at least a couple years, officials said.

Hamilton, who is part of the team responsible for the program of instruction throughout basic, said the Army also reduced theater-specific training and updated the culminating field training exercise at the end of basic training.

The basic training program of instruction needed to be updated, said Sgt. 1st Class David Stover, the 2013 Drill Sergeant of the Year who was a member of a working group involved in the review.

"Some of the lesson plans were outdated, we were teaching old doctrine," he said.

For example, landmine lessons were too focused only on Iraq- and Afghanistan-specific threats, when a broader lesson is more effective, Stover said.

A drill sergeant at Fort Jackson for 14 months before moving on to the Drill Sergeant Academy for a year, Stover described the new basic training as the "G.I. Joe starter kit."

"You go to the store and buy the doll, and you buy the add-ons later," he said. "We wanted to create the basic soldier."

The Army has also removed some "redundant tasks" and reordered programming in the training, Woods said.

This includes tasks that were specific to preparing soldiers for deployment to Iraq and Afghanistan, such as personnel recovery, cultural training and convoy training.

Walthes said he hopes soldiers who undergo basic training under this new program of instruction will emerge "very committed to Army values, the profession and the warrior ethos the Army has."

Woods said the goal is to increase the quality of soldiers as they enter the Army.

"Whenever the Army gets smaller, the quality of individuals needs to be higher," he said.

Our children have fought the nation’s forever wars. It’s Congress’ responsibility to keep them out of unnecessary danger.

Congress should apply lessons learned from Afghanistan to current or future military engagements we consider, writes this veteran.

Lawmakers are questioning whether tattoo policies are slowing military recruiting.

The 2022 Warrior Games will be held at the ESPN Wide World of Sports complex at Disney World, the first time Disney has hosted the Games.

As mission commander, Marine-turned-astronaut Col. Nicole Mann will be responsible for all phases of the flight, from launch to reentry.

Our children have fought the nation’s forever wars. It’s Congress’ responsibility to keep them out of unnecessary danger.

Congress should apply lessons learned from Afghanistan to current or future military engagements we consider, writes this veteran.

Lawmakers are questioning whether tattoo policies are slowing military recruiting.

The 2022 Warrior Games will be held at the ESPN Wide World of Sports complex at Disney World, the first time Disney has hosted the Games.

"Project Convergence 22 is the perfect, practical example of where we are coordinating laterally with our sister services," said Lt. Gen. John Morrison.

From Super Hornet to space: How this Marine became an astronaut

When will the next-generation missile interceptor be ready?

How a new Army cyber general got George Patton’s stars