Soldiers looking for help to navigate their way to a successful career can now log on to a new and improved Army Career Tracker.

The tracker is a career management site that helps enlisted soldiers, officers and Army civilians map out their careers based on their specialties. And as of May 27, more than 1 million users — more than 670,000 enlisted, 135,000 officers and warrants, and almost 200,000 Army civilians — are now using the system, which pulls together in one place information from 14 different Army systems, including training opportunities and education requirements.

"A young soldier can look at it and see the career path from an E-1 all the way to a sergeant major, all the schools they must go through, all the different training they must attend," said Aubrey Butts, the director of the Institute of Noncommissioned Officer Professional Development, which is part of Training and Doctrine Command. "And if you look at a career that’s 30 years, you can look on the site and it’ll take you to the source documents that tell you what you need to do and what you must accomplish. It’s a self-service feature to help guide soldiers to success."

Sgt. Maj. James Thomson, the sergeant major for the Institute of NCO Professional Development, encouraged all soldiers to use the Army Career Tracker.

"What I would counsel a young soldier on is there’s no better advocate for their career than themselves," he said. "As your supervisor, I’m here to support you and mentor you and help you, but the best way for you to help yourself is to act now and log in to the Army Career Tracker." 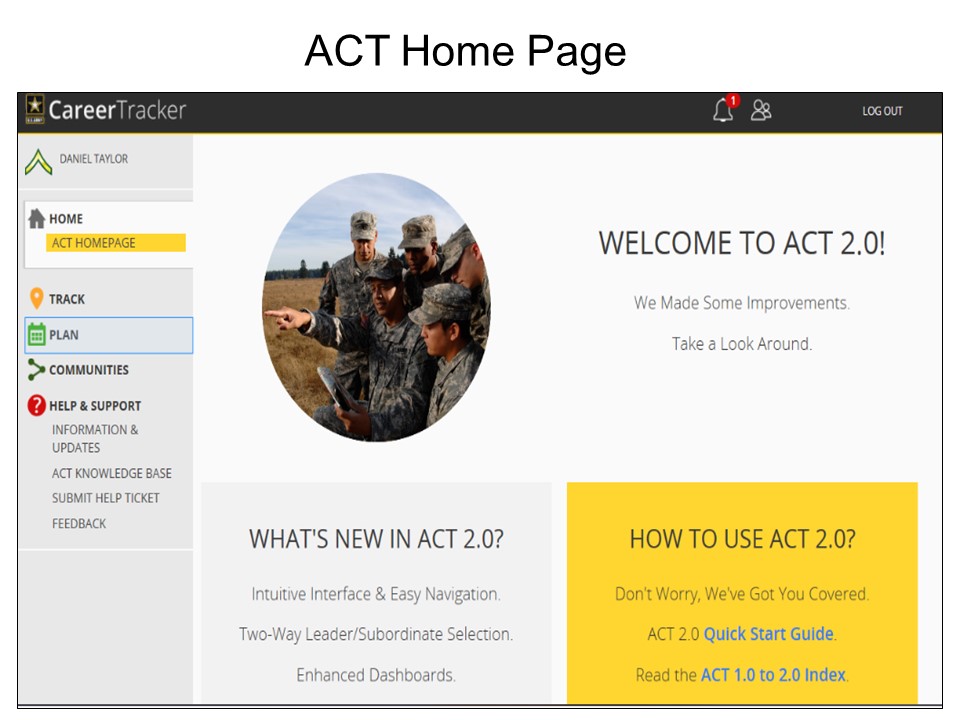 "We combine training, education, experiential learning and self-development into one entity," he said.

Soldiers also can use the Army Career Tracker to keep tabs on their progress and career development, search multiple Army education and training resources, create professional and personal goals, receive personalized advice from leaders and mentors, and enroll in courses and training.

One new feature in the Army Career Tracker is the Army sponsorship program, Colimon said.

This program connects soldiers who are preparing for a permanent change of station with a sponsor at their new unit. This new feature ensures soldiers and their families are taken care of even before they arrive at their new duty station, Colimon said. 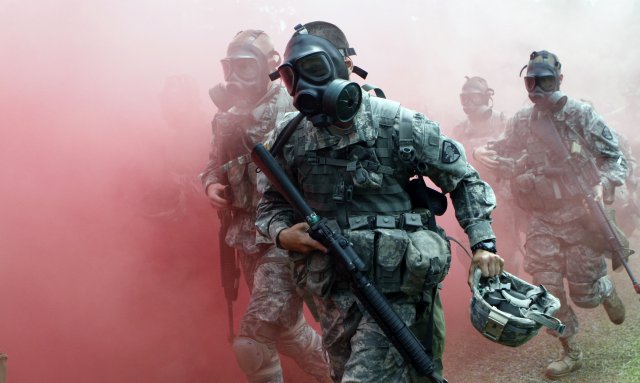 The Army used soldier feedback to improve the Army Career Tracker, which helps troops map out what they need to do for a successful career. Here, new West Point cadets are graded on their response to a chemical attack.
Photo Credit: Mike Strasser/Army
The Army in April revised all 187 enlisted career maps featured in the Army Career Tracker, Colimon said.

The revised career maps "really does enhance" the ability of the soldier and their supervisor to develop personalized individual development plans to manage their careers, Thomson said.

The pilot program, which is currently underway with about 130 new hires, helps new employees learn about and get to know the Army. It also helps them develop an individual development plan and guides them on which education courses and training are required during their first year of employment, Sharp said.

The Army will expand the pilot in July to include new civilian employees at all TRADOC activities, she said.

Another new feature is the Army Transition Program, which prepares soldiers for the transition to civilian life, Colimon said.

"Throughout the military lifecycle, the Army Transition Program has specific requirements," he said. "We send soldiers notifications for these requirements to take specific actions throughout their lifecycle."

Another advantage to the transition program is it allows a soldier to look at his whole career in one place as he’s preparing a resume, Butts said.

"That’s one of the main features in helping the soldier to take his career, categorize it, put it in a logical form that he can put together for an employer when he gets out," he said.

The Pentagon lifted a longstanding ban that prevented troops and civilians from searching for abortion-related term last month.

Experts are split on the Army's quick reversal of high school education waivers, but some applicants are left out in the cold.

President Joe Biden is bestowing the nation’s highest military honor to four Army soldiers for their heroism above and beyond the call of duty during the Vietnam War.

The U.S. Army opens up detailed design and prototyping phases of the Optionally Manned Fighting Vehicle competition releasing a request for proposals to industry.

"It was clear from the onset and confirmed throughout our visit that volunteers played a critical role in the defense of Kyiv, yet their role has not been systematically studied."

Putin has declared victory in the eastern Ukraine region of Luhansk, but the high cost of Russian gains may limit a new advance.

The last remaining Medal of Honor recipient from World War II will lie in honor at the U.S. Capitol.

Can you hear me now? Guard advances 'bring your own device' comms strategy