Command Sgt. Maj. Christopher Greca didn’t have to tell many ​people about his time off to get himself right at Walter Reed National Military Medical Center in Bethesda, Maryland

. The senior enlisted leader of U.S. Central Command could have filed that under "need to know."

He took a different course — with a Facebook post anyone can see — in hopes that soldiers in similar positions would also seek professional help if they needed it. If a top noncommissioned officer seeks help to deal with the wear of a 30-year infantry career, who should feel embarrassed to do the same?

The post begins: "I was struggling a bit over the past few years and more so in the past 6 months — physically (knee/neck surgeries, balance issues, vision), mentally (lack of sleep, memory and concentration), and emotionally (withdrawing, losing interest in what were formerly fun activities). All these things made me realize I needed some professional help." He gives an overview of the help he got, says he’s in "a better place," "ready to better resume my duties," and advises other soldiers to be unafraid to do the same.

In an interview with Army Times, he said he figured the Facebook post would get just a few "likes," similar to other posts on his official page. Instead, the Jan. 26 statement blew up with more than 860 likes, 300 shares and 130 comments.

A. I did it because I wanted to say it was OK for service members to ask for help as needed. I understand the issues, physical, mental and emotional. I know it’s out there. I’ve had a few senior friends who have been exposed to different situations, PTSD and some other stuff. I know that problem is out there. That’s not necessarily the reason why I did it. I had an experience; I figured, let me share it with some folks. Here’s one senior leader’s story, do with it what you will. Learn from it, grow from it. I hope it can help one or two. And if it did, I win with that Facebook post. And by that I mean the Army wins with that Facebook post.

Q. When did your issues develop?

A. It starts to sneak up on you after a while. I think it’s been cumulative. I think over the years, we who serve — this is a hard life. Physically, mentally, emotionally, it can be draining. I originally started having sleep issues like many sergeants major do, during a deployment in 2007 through the beginning of 2009 to Baghdad. There was some memory loss but nothing to be concerned with. The lack of sleep that had progressively gotten worse. And in 2010, a convoy I was in in Kabul was hit by a suicide-vehicle-based improvised explosive device. I use those two specific deployments, but it’s all cumulative. The physical pounding, and the neck issues, knee issues and the back issues. Some of it’s like aging; if you aren’t paying attention to it you don’t see it. If you’re having trouble sleeping, five hours turns to four hours and four hours turns into three hours and 45 minutes. It’s 30 years of service that — I’m not sniveling, but it’s been demanding. We’ll use the term demanding. 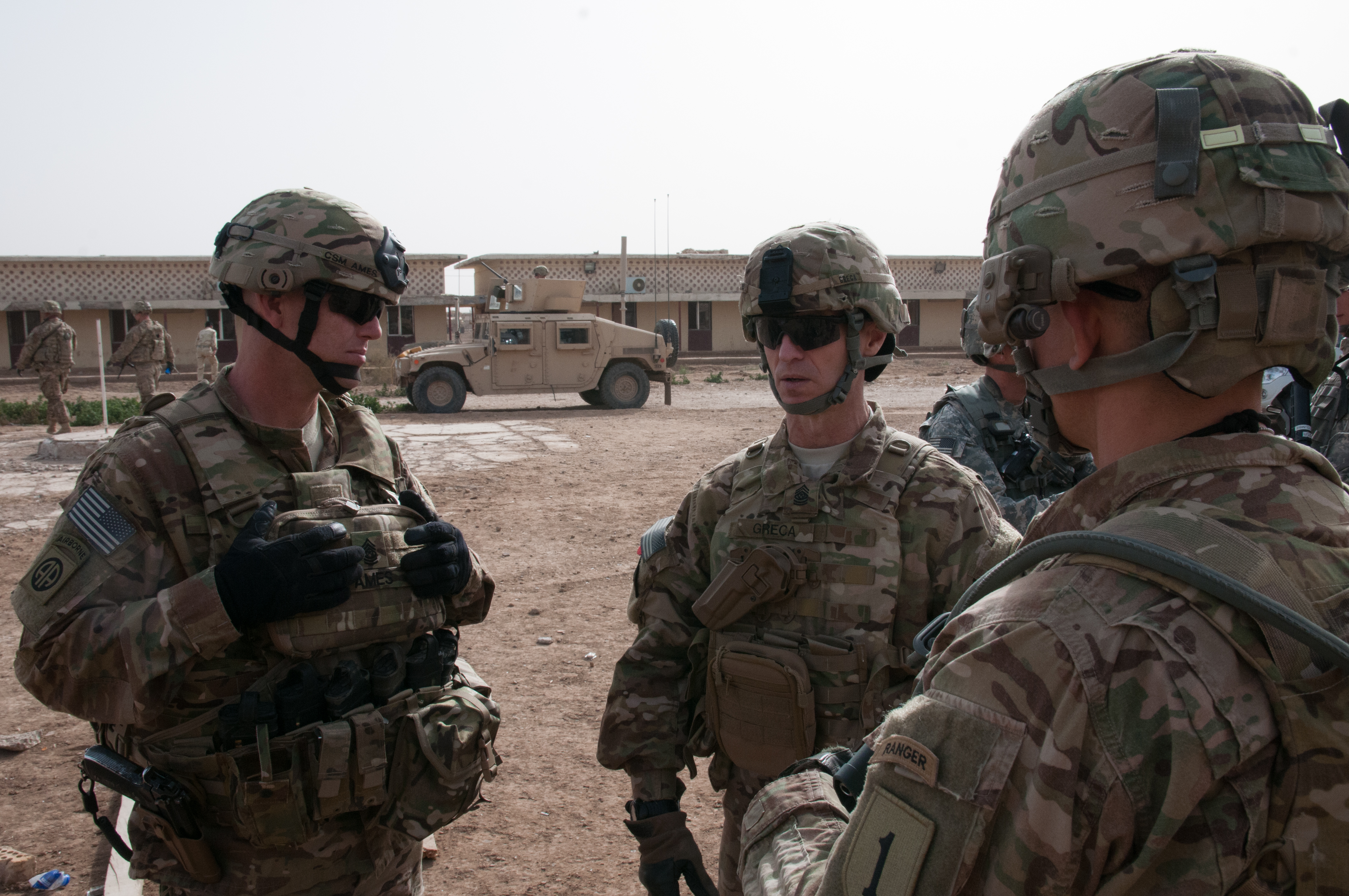 A. I think it was a slow build, I don’t think it was a particular moment. I’ve known for a couple years that I don’t just need a quick visit to the hospital. Simultaneously, I ran into a Care Coalition nurse in Landstuhl, Germany; she realized there were a few more issues going on with me than even I recognized. She recognized a balance issue that I had. My eyes were an issue. She made me realize it was a little bit deeper. And returning from there, the push was my wife. She said "you’re not waiting for retirement, you’re going to do it now."

Q. What specific tactic or person helped you get through the trouble the most? What worked?

A. I mentioned in my post, gave credit to a team at Bethesda, Walter Reed. They identified sleep, other things as well. Multiple physical things, related to balance and eyesight. But if you don’t sleep for a while you’re going to crash. How do you get a better rest, how do you develop sleep hygiene?

The only negative feedback I got was "it must be nice to be the CENTCOM guy to get the help when others are struggling." My response was it was never about Walter Reed or where I went. You’ve got caring leaders out there who can get you to the right person or the right location. I had a tremendous team at Walter Reed that helped me, and developed a plan.

Q. What do you think is the best way to reach soldiers who are dealing with these problems?

A. The first thing is that people need to recognize they have a problem. Sometimes that’s the biggest issue. Some changes in people don’t happen overnight, they happen over time, sometimes very subtle changes. Asking their peers, asking leaders, asking family members or friends: do you notice changes in me? I promise, this is not just lip service from a senior leader, there are enough people that care to get people the help they need. We have a caring group of professionals throughout the joint force and willing to be part of the solution.

Q. Are there still any points of emphasis for the Army or within its culture that can or should be addressed?

A. The stigma thing comes up over and over. I thought we ended the stigma years ago. Apparently at the lower levels and midgrade the impression still exists that people are going to think less of them. I don’t know of one leader in the Army who thinks less of people who ask for help. Not one. This happens to all grades: It happens to NCOs, enlisted, civilians. Don’t be so proud that you’re afraid to ask for assistance.

The change came less than a week after Army Times cited the report in an April story about soldier suicide.

The release of the Texas DPS document comes as Aguilar is attempting to have her confession thrown out as inadmissible.

‘Top Gun: Maverick’ is the respite from reality we all need

The Army and several international partners made headway to achieve battlefield interoperability at EDGE 22 at Dugway Proving Ground, Utah, but there is still plenty of work to be done to seamlessly tie allies and partners together in operations.

Objections centered on the library gathering but allegedly have led to a blanket ban from local leadership on any drag-related Pride Month event.

US Army signs deal to backfill Stingers sent to Ukraine

Raytheon has netted a contract to build Stinger anti-aircraft missiles to replace those the U.S. military sent to Ukraine.

Hero teacher killed in Texas shooting was a Marine mom

Can we honor deaths by suicide on Memorial Day?

Families of veterans who died by suicide likely may wonder if we’re guilty of “stolen valor” when openly honoring them on Memorial Day.

'We understand this will not be an easy or a quick fix.'

Is Memorial Day a federal holiday?

The quiet artistry of bringing the dead home from war