Calling all female noncommissioned officers: The Army wants you to consider transferring into combat arms jobs.

Just weeks after Sergeant Major of the Army Dan Dailey sent a memo to the force calling for volunteers, the Army is preparing to send a team of subject matter experts to several major installations to inform soldiers about the opportunities available to them.

"Currently, we have over 100 young women across America who have volunteered to join our ranks as cavalry scouts, armor crewmen, fire support specialists and infantrymen," Dailey wrote in the Aug. 1 memo. "… As young soldiers do, they will look for leadership and mentorship from their superiors. Unfortunately, we have not had a sufficient number of serving female soldiers and NCOs volunteer to transfer into these mentorship and leadership roles."

So far, almost 180 women have enlisted, commissioned or transferred into formerly closed occupations, according to the Army. About 140 of those women are new recruits who are expected to start shipping for training next year.

To better integrate its all-male units, the Army is taking a "leader first" approach. This means seeking to put in place female officers and NCOs before integrating new, junior soldiers.

"It was always our view that we needed to have the leadership cadre in place," said Army Secretary Eric Fanning. "That’s been our primary focus, [and] to do that, we have to have people who will rebranch or transfer over."

However, the Army has not seen the "numbers we’d hoped for," Fanning said.

"That’s not a surprise, because we always knew the numbers wouldn’t be huge," he said. "With or without the numbers that we’re hoping for, we’re going to make this work. We just think getting this cadre in place will make things smoother."

"Our analysis overwhelmingly said there’s a better chance of success if we had senior females in the organization prior to the arrival of new soldiers," he said. "Will we still do it without that? Yeah, we’re still going to integrate females, but it will be better if we have female leaders in place."

The Army already has new female soldiers signing up for combat arms jobs. There also are young officers who are in training to become infantry or armor officers, Dailey said. 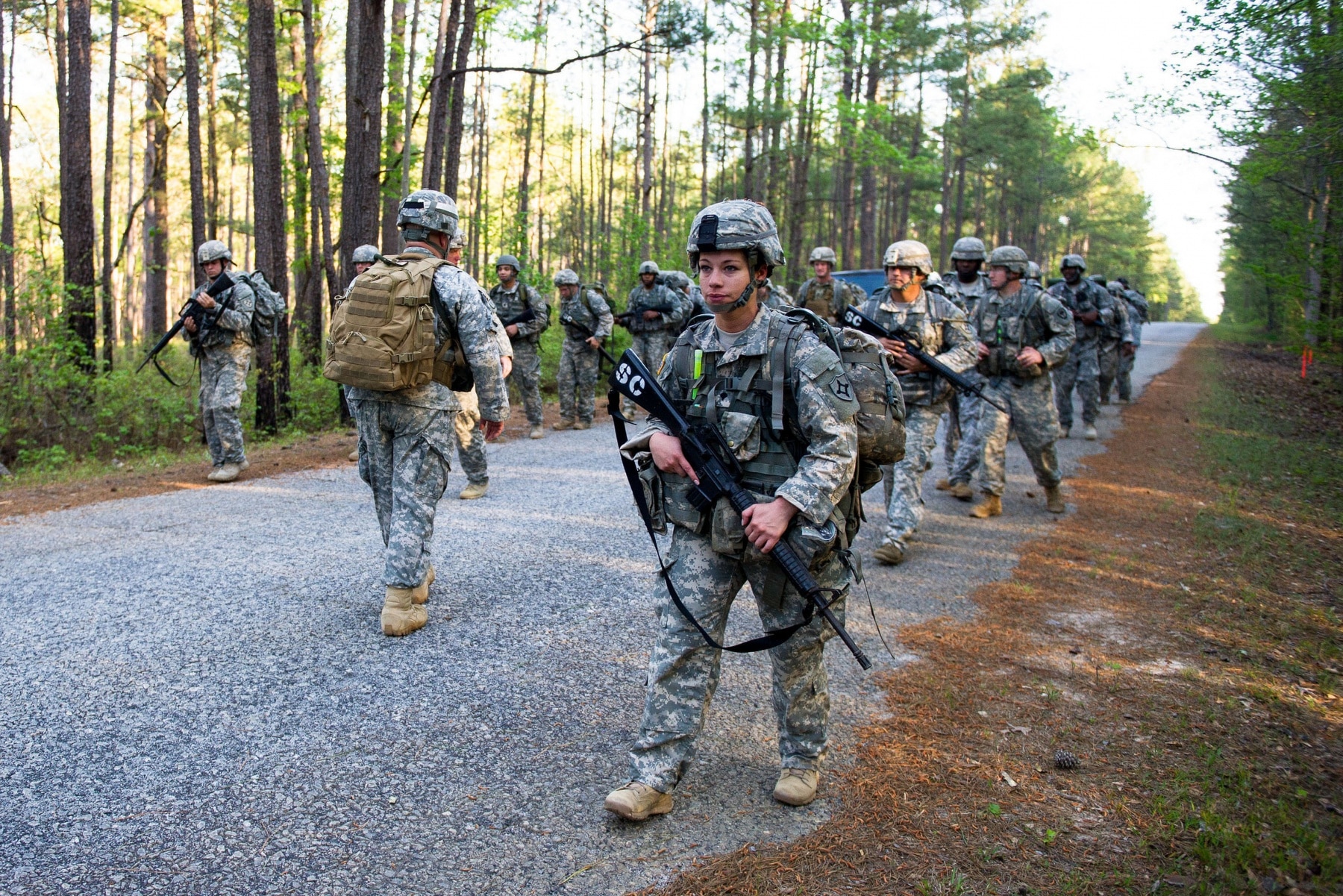 Soldiers assigned to the Florida Army National Guard conduct a 12-mile ruck march at McCrady Training Center, April 4, 2016, as part of combat engineer training for soldiers transitioning to the 12B career field. This class was the first at McCrady to train women going into the career field.
Photo Credit: Tech. Sgt. Jorge Intriago/National Guard
Dailey’s memo to the force was designed to get the word out, he said.

"We designed a program that allows female soldiers to train and take on a secondary MOS so they can integrate into these MOSs, and in walking around and talking to soldiers, they don’t know about this," Dailey said, in explaining why he wrote the memo.

"There are no quotas. I’m adamant about this. This is a standards-based process," Dailey said. "We’re going to integrate females into combat arms whether 100 female NCOs sign up or zero. But just like everything we’ve done in the Army, we train and educate our soldiers. I didn’t want anybody to be disadvantaged, saying, ‘if I had known, I would have given it a shot.’"

As a next step, the Army is sending a team of subject matter experts on a tour of the service’s major installations.

"Like we do with every other event, we’re going to go around to major installations and educate soldiers on the opportunities," Dailey said.

The goal of the installation tour is to make sure soldiers "know, dispel any myths, answer any questions, and have career counselors there for them to talk to," Dailey said.

"Educating the force on a major change in the United States Army is consistent with any other major change we’ve done," he said. "We inform, we educate, we implement. We spent a massive amount of time during [the repeal of] ‘don’t ask, don’t tell,’ and it made a difference."

Dailey used as an example the program that allows for enlisted soldiers to attend West Point.

"Every year, we don’t do well with that program," he said. "So I had a team go out and tell soldiers about it, and the numbers went through the roof."

The opportunities for female NCOs to transfer into a combat arms job as a secondary MOS is outlined in a recent Military Personnel message, Dailey said.

"We sent out lots of messages," he said. "Soldiers don’t look for them. I never looked for an [All-Army Activities message] in my life until I was a first sergeant, and even then I was only looking for the one I needed at the time."

So far, the Army has successfully trained and transferred one active Army captain into the infantry, said Lt. Col. Jerry Pionk, an Army spokesman. She will be assigned to the 82nd Airborne Division this fall.

One active Army NCO has reclassified into a combat arms job; she is scheduled to start training later this year. Four female NCOs in the Army National Guard have reclassified and trained into infantry and armor occupations, and they are "currently serving in their National Guard units to set conditions for future female recruits that access into these occupations," Pionk said.

"Most of these women will attend follow-on training in conjunction with their assignments, with arrivals to Fort Hood and Fort Bragg set to occur in the second and third quarters of fiscal year 2017," Pionk said.

About 140 new soldiers will begin training early next year for infantry and armor jobs, he said.

RASP 2 is designed for soldiers in the rank of staff sergeant and above and all officers volunteering for assignment to the elite regiment. The NCO did not meet the requirements of RASP 2, but she has been given the opportunity to reapply for the program in December, officials said.

The Army also has approved applications from two female officers to attend Special Forces Assessment and Selection, an early step toward becoming a Green Beret. The women could attend SFAS as soon as this fall.

"Leadership is vital to successful integration, and ensuring that women leaders are in place first will further enable future women recruits in those units," Pionk said.

The women can apply to attend training and serve in one of these previously closed MOSs, according to the message.

"Additionally, they will maintain their current [primary MOS] for promotion and may, at a later time, request to convert their [secondary MOS] to their PMOS," the message states.

Interested soldiers must be a sergeant non-promotable or below, meet the requested MOS’ standards, and be recommended by their immediate commander, according to the Milper.

Dailey said he understands that combat arms jobs aren’t for everyone.

In his memo to the force, Dailey, a career infantryman, wrote that the path to one of these jobs won’t be easy.

"The standards have and always will be very rigorous," he wrote. "You will be challenged both mentally and physically."

The Army says its new master human resources platform is on track for full implementation Sept. 30.

The teams use focus groups and on-the-ground interviews to dig deeper than traditional climate surveys.

Better tools could help with a host of regional problems.

West Point has so far not disclosed what punishments the cadets are facing.

Participating museums are offering free admission to military families from May 21 through Sept. 5.

Wildfire monitoring, other state missions in jeopardy without a Space Guard, these officials say

Space Force officials want to move away from the traditional Guard and Reserve. These colonels say that's a bad idea.

Putin complains about barrage of cyberattacks

Putin charged that “an outright aggression has been unleashed against Russia, a war has been waged in the information space.”

How much can I contribute to my IRA? — Money Minute