Just weeks after graduating from the Sergeants Major Academy Fellowship Program, all 19 noncommissioned officers from the program are already back in the classroom.

This time, however, armed with master’s degrees in adult education from Pennsylvania State University, they’re in the front of the class as instructors.

"The quality of education at [the academy] will improve because of us attending such a quality school and bringing it forward to the academy," said Sgt. Maj. Manuel Atencio, one of the graduates. "It’s a great opportunity to train, coach and mentor the future sergeants major we’re going to have. If we want a quality force, we have to have the best instructors."

The Sergeants Major Academy Fellowship Program is a merit-based program that allows qualified sergeants major to compete for scholarships to earn a master’s degree in adult education through Penn State.

The program offers up to 20 scholarships a year. Each scholarship is worth $27,900.

Successful applicants will complete the one-year program while stationed at the Sergeants Major Academy at Fort Bliss, Texas. They will then spend three years as instructors at the academy.

The fellowship program will better prepare soon-to-be instructors at the academy, and it is part of the Army’s overall commitment to improving its education courses.

As the program matures, the goal is to eventually replace the instructors at the Sergeants Major Academy with fellowship graduates.

The first group of fellows graduated Aug. 22 with an average grade-point average of 3.88 out of 4.0, said Command Sgt. Maj. Dennis Defreese, commandant of the Sergeants Major Academy.

The second class is already underway. 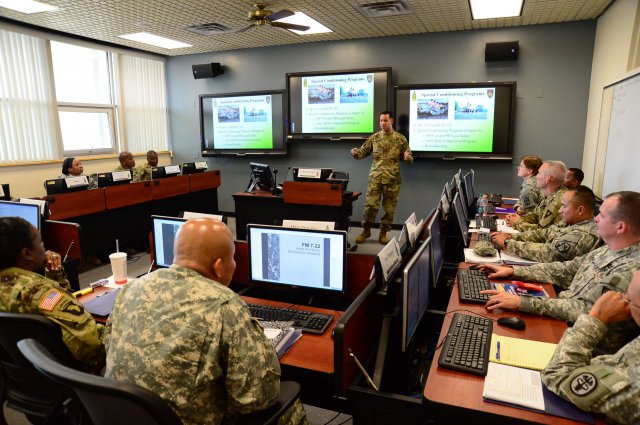 The fellows are a "uniquely educated and trained group that can definitely benefit the Army in multiple ways," he said.

Sgt. Maj. Feliece Murrell said the fellowship program gave her "a great perspective" for her follow-on assignment as an instructor for the Sergeants Major Course.

"It was a very rigorous course, it required a lot of critical thinking, a lot of reading, a lot of writing," she said. "But we could really see the improvement in our learning strategies and our writing, and it’s something we can transfer to the students here at the Sergeants Major Academy."

Both Atencio and Murrell said they would recommend the fellowship program to others.

"It’s personally beneficial for us all, [and] it’s a quality education that they will have for the rest of their lives," Murrell said. "But most importantly, it’s the transfer of learning that we will have once we become instructors here at the academy."

The Sergeants Major Academy is already seeking applicants for the third iteration of the fellowship program, which will begin in summer 2017.

Sergeants major from all components who have completed the Sergeants Major Course can apply. Applicants must have a bachelor’s degree with a GPA of 3.0 or higher from a regionally accredited university. They also must be able to pass the Army Physical Fitness Test and be U.S. citizens.

Applications must be received by Oct. 30.

The selection panel will convene Nov. 15 at Human Resources Command. The list of finalists will be presented to the commandant of the Sergeants Major Academy, in this case Defreese, for final selection.

Full details on how to apply can be found in

Sergeant Major of the U.S. Army

Research needed for veterans with genital and reproductive wounds

A new survey seeks information from an estimated 1,500 Iraq and Afghanistan war veterans living with injuries to urinary, genital and reproductive areas.

“This ... is not only a war against Ukraine,” said Maj. Gen. Serhii Salkutsan, its NATO military liaison. “This is a war against the ... civilized world."

The Air Force unveiled the Northrop Grumman-made B-21 Raider to the public Friday in a ceremony at Air Force Plant 42 in Palmdale, California.

US forces monitor Mideast skies at Qatar base amid World Cup

The creation of a task force focused on drones and other off-the-shelf battlefield technology at Al-Udeid Air Base shows the U.S. is in Qatar to stay.

Turkish threats of a ground invasion have stymied the missions with Kurdish forces.