Former Capt. Lisa McCombs was heading home from a quick day trip to Kansas last year when she ran into road block -- American Airlines staff wouldn't let her fly home with her service dog, even though she'd had no problem getting him there that morning.

Now the Iraq and Afghanistan veteran is suing the airline for exacerbating her post-traumatic stress during a two-day ordeal in which members of their Manhattan, Kansas, crew refused to honor her tickets and publicly humiliated her multiple times, according to a lawsuit filed this week in her home state of Mississippi.

The 35-page brief lays out in detail the prior-enlisted engineer officer's experiences from Oct. 25 to Oct. 27 last year when trying to return home to Gulfport, Mississippi.

McCombs served from 2005 to 2009, including a 2006 deployment to Iraq and 2008 deployment to Afghanistan, according to her service records.

"We try not to try our cases in the media," Christopher Van Cleave told Army Times on Thursday, declining to give details on McCombs' trip to Kansas or her medical care since the incident.

According to the legal brief, airline personnel refused to let McCombs through security with her dog for two days in a row despite adding Jake, a chocolate Labrador Retriever, to her reservations and bringing several forms of valid documentation listed on American Airlines' website.

With boarding passes in hand on Oct. 25, a Sunday evening, McCombs alleged, an agent approached her and asked, "Ummm, are you trying to fly with that?" while gesturing to the dog. 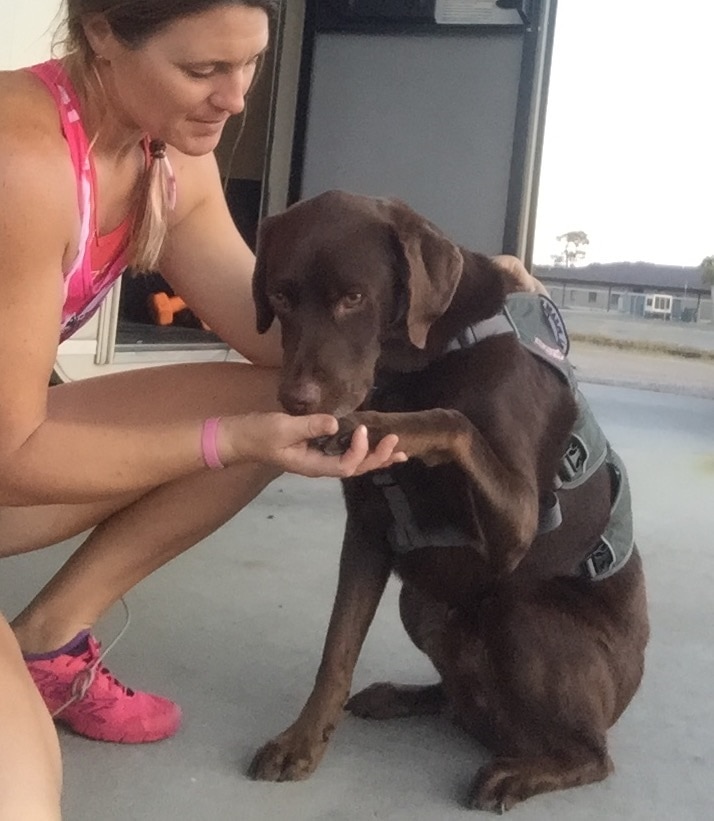 Former Capt. Lisa McCombs and her service dog, Jake. McCombs filed a lawsuit Monday against American Airlines for their refusal to let her fly home with the dog last year (Courtesy Christopher Van Cleave).
Over the next two days, airline staff canceled her original flight and a second flight she booked over the phone while standing in the airport, according to the lawsuit, demanding that she either buy a carrier and pay $125 to have Jake flown home in the cargo hold, or submit Jake's paperwork via fax and wait two days for approval.

After arguing with personnel in the airport and trying to explain her situation to American Airlines customer service over the phone, McCombs began to experience a panic attack and was eventually ordered to leave the airport altogether.

On Oct. 27 she booked a Delta flight out of Kansas City and rented a car to drive two hours to get there, just as American Airlines customer service came through with an offer of a third flight.

McCombs canceled her Delta tickets and went through a smooth check-in and security with the same airline crew she'd dealt with the previous two days, according to the brief.

She was further humiliated during her connection at the Dallas/Forth Worth airport, when an entourage greeted her on the jet bridge with a wheelchair, calling out for a "disabled veteran" and insisting on escorting her to her next flight.

McCombs, who according to the lawsuit suffers from VA-diagnosed PTSD and acquired Jake to help her cope with anxiety, is suing for emotional damages as well as subsequent medical care and therapy required to help her process the incident.

Van Cleave has not been in contact with American Airlines since the filing, he said.

"We appreciate and thank Ms. McCombs for her service to our country," American Airlines spokesman Matt Miller told Army Times in a statement Thursday.

After McCombs made it back home, an American Airlines official reached out to her, according to the lawsuit.

He offered to reimburse her for her flights and hook her up with some first-class international tickets, she alleged, but Miller would not elaborate on their conversation or if there were any consequences for the airline staff involved.

"Jim Palmersheim, American’s senior manager of Military and Veterans Programs – a pilot and U.S. Army veteran – immediately reached out to Ms. McCombs and spoke to her for more than an hour to obtain additional information on what occurred at both Manhattan Regional Airport and Dallas/Fort Worth International Airport," he said.

Miller would not say whether the airline plans to fight the suit.

"We will not be able to comment on the allegations in the lawsuit, since this matter is pending litigation," he said.
About Meghann Myers

Fewer military families may qualify for the stipend because their housing allowances will count as income,

Veterans who are looking to reach the helpline can call the Veterans Crisis Line directly at 877-267-6030.

Marine vet gets Lakers crowd hopped up by chugging from prosthetic

The specialist claimed his girlfriend threatened him with a knife. Police have noted discrepancies in his account of the incident.

A second former Army soldier has pleaded guilty to federal charges stemming from the 2020 killing of a fellow service member found dead at a Georgia base.