If someone leaves a radioactive device in the New York subway, active Army soldiers could be called in to help.

Since May, the Fort Drum, New York-based 59th Chemical, Biological, Radiological and Nuclear Company has been on call and training to respond to terror attacks with first responders in the country's most populated city. The unit is the first active Army CBRN unit to train in New York City with the city's fire department.

"Biggest training objective [is] to fall in on the New York Fire Department’s plan," company commander Capt. Derek Burke told Army Times in an interview. "Arriving to the site when it’s already operating, integrating with the fire department’s command structure, then taking over the full operation of the site and operating it."

The soldiers wouldn't be the first on scene, but if local resources became overwhelmed, the unit would be put on a 48-hour recall to pack up and drive the six hours down to the city to help with mass casualty and decontamination procedures, for example.

The company is spending a year as part of the Defense Chemical, Biological, Radiological, Nuclear and High-Yield Explosive Response Force mission, Burke said, a initiative under U.S. Northern Command.

As part of that mission, they first went to NYC to simulate an incident in a real subway station.

"The mission back in May was a reconnaissance mission down in the subway system, which was effective," Burke said. "They had a radioactive device down in the subway that someone had planted, and we went in and mitigated and took samples of stuff and evacuated the thing." 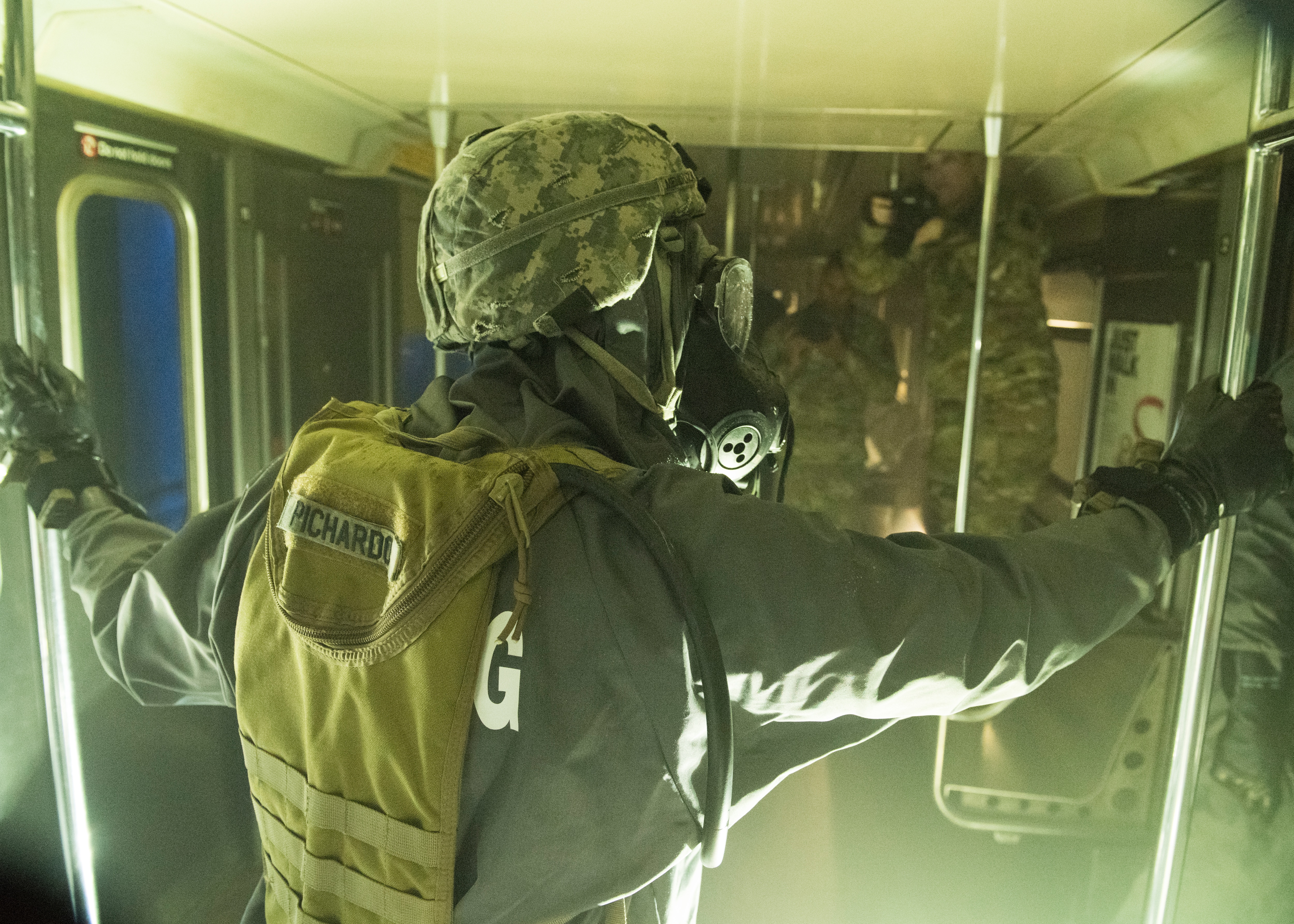 Soldiers with the 59th CBRN Company from Ft. Drum, N.Y., respond to a training scenario in the smoke-filled subway trainer at the New York Fire Department’s Fire Academy on Roosevelt Island, Nov. 29, 2016. The joint training exercise, led by FDNY and U.S. Army North, provided soldiers and first responders the unique experience of operating together together during a complex chemical, biological, radiological or nuclear emergency.
Photo Credit: Tech. Sgt. Joe Laws/Air Force
The two organizations linked up again for a week in late November and early December to build on that experience, training in the FDNY's subway and clandestine lab simulators.

"The subway simulator itself has the ability to pump smoke, [make a] screaming casualty sound, so it really makes the environment pretty stressful for the soldier," Burke said.

The soldiers got to see several kinds of staged labs, including a meth lab and chemical or biological weapon processing labs, and run a response scenario.

"The lab itself, they knew there was some sort of lab in there, and we had to go in and identify what type of labs were set up there and what the possible products were," said 1st Lt. Brittney Wudstrack, a platoon leader in the 59th CBRN Company.

The soldiers also practiced decontamination scenarios, as they are primarily focused on responding to a radioactive threat.

"There’s a lot of radiation sources out there, and if they can get their hands on enough of it and just disperse it, some kind of explosion could happen," Burke said. "That’s probably the biggest way to cause as much damage as possible."

The soldiers were also given a bigger picture perspective of the kinds of scenarios they would respond to as part of the task force.

"The fire department was also able to give the whole platoon a hands-on tour of the city," Burke said. "They got to go around and see Times Square, the Marriott Marquis, Wall Street, Grand Central Station -- a few other places where the fire department feels that if something were to happen, it may be around these locations."
About Meghann Myers