Inside the Army's plan for the new Expert Action Badge

Now, the Army is toying with the idea of another expert badge, specifically for everyone who isn’t an infantryman or a combat medic.

The Expert Action Badge would test general soldier skills, Sergeant Major of the Army Dan Dailey told Army Times, similar to how the EIB and EFMB test core infantry and combat medic proficiency outside of deployments.

"I want to build individual skills," Dailey said. "The reason why we have an EIB and EFMB is so those two fields can maintain their skills during peacetime."

Offering testing and a badge is a good way to incentivize soldiers and units to train and remain proficient, Dailey said.

Command Sgt. Maj. David Davenport, the top enlisted soldier at Training and Doctrine Command, went public with the plan on March 24. Initial reactions from soldiers and veterans were mixed, and Army Times was flooded with nearly 500 reader comments about the move.

Some were interested in the opportunity to test their skills in garrison, while others saw it as another participation badge — similar to the way they felt about the CAB — for soldiers who opted out of the risks of the infantry.

A pilot is underway at Joint Base Lewis-McChord, Washington, Command Sgt. Maj. Michael Gragg, the senior enlisted soldier for the Center for Initial Military Training, said March 30 during an online town hall meeting.

If all goes well and the badge is approved by the chief of staff and Army secretary, Dailey said, it would be awarded for the first time in 2019.

‘Not a participation trophy’

Testing for the EAB is a three- to four-week process, according to a TRADOC spokesperson, with one or two weeks to prepare for the two-week test.

The events are based on the 30 Warrior Tasks and Battle Drills skills first introduced at basic, as well as up to five events from a unit’s Mission Essential Task List, Gragg said.

That includes land navigation, a fitness test and a 12-mile ruck march. 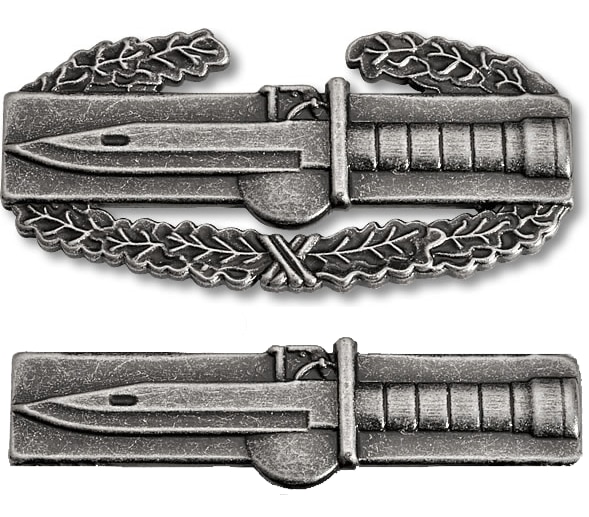 The Combat Action Badge, above, is seen here alongside the proposed Expert Action Badge.
Photo Credit: Staff
Soldiers will have to locate three out of four land nav points in two hours, pass the PT test with more than an 80 percent score, and complete the ruck march in three hours or less, Davenport said during the March 30 town hall.

The competition, administered at the brigade-level or higher once a year, is designed to encourage soldiers to become experts in their basic tasks, as many fall out of proficiency after basic training.

"Right now, in the concept brief we have going on at JBLM, we have 53 soldiers going through," Gragg said. "Twenty-five didn’t even know how to properly wear their protective mask or even don it in an appropriate manner."

That’s a training issue, he added, a problem that unit leadership needs to focus on individually. Preparing for an annual EAB could close that gap.

"It’s not a participation trophy," Gragg said. "The infantryman does his infantry tasks every day, but still probably only 25 percent of them get the badge when they go compete for [the EIB]."

Soldiers competing would be able to fail and re-test two events, once each, before being disqualified, Gragg said.

The pilot is also throwing some curve balls at soldiers, with extra events like shotgun or AK-47 shooting.

"Not necessarily something that is in the Warrior Tasks and Battle Drills, but we’re using those to determine the flexibility of the force — to see what we can do and how far we can take this event, to make sure that we get the professional soldier that we want, and it’s challenging enough so that everybody understands it’s not an ‘Everybody Action Badge,’" Gragg said.

Starting in 1944, members of infantry, Special Forces or Ranger units received the shiny powder blue pins for fighting in active ground combat or excelling in a competition to test their skills.

That is, until 2005. As the Global War on Terror sent thousands of soldiers from all military occupational specialties on patrols or convoys that brought with them the dire threat of improvised explosive devices and ambushes, the services began to award the Combat Action Badge to anyone who had engaged with the enemy while not serving in an infantry-type unit.

The move was met with much groaning from the CIB-eligible community, and the reaction was similar with the unveiling of plans for the EAB, the garrison answer to the infantry's EIB.

"Nope. We all got to choose our MOS. One of them came with a few additional badges," wrote Ryan Dickinson Gamc on Army Times' Facebook page. "If you didn't pick that one, cool. Now move on with your life."

Others agreed, calling the badge a participation trophy.

"No. You get to wear the U.S. ARMY tape for completing basic soldier skills," wrote Robb Lundberg. "This would legitimately just be a participation trophy."

"I would be curious to see the 'skills test.' Earning your EIB is no easy task," wrote Kevin Jones. "In my opinion, the 'inclusion' is going too far. Just like the completely broken awards system in the Army, the powers that be are degrading the accomplishments of others to accommodate those that just want another badge. It seems like those that are not willing to sacrifice are being rewarded for being a soldier."

Pfc. Connor Haste of the 82nd Airborne Division, approaches a notional enemy soldier during Expert Infantryman Badge testing. The Army is testing a new badge that would be similar to the EIB but designed for non-infantry soldiers.

Asked about the detractors, Dailey was unconcerned.

"I don't think a few comments represent the opinion of the entire force," he told Army Times. "However, varying thoughts and opinions are why we have pilot programs like the one ongoing for the Expert Action Badge. We're going to look at the EAB, conduct the pilot and assessment, and go back to leadership for final recommendations."

Despite the barrage of negative reactions, there were many who showed support, inside and outside of the infantry.

"I don't see the problem with this badge. Infantry and medics get one, why can't other MOSs?" Jeremy Adams wrote. "It's a way to motivate non-infantry and non-medics to get better at basic warrior skills. ... So, if this shiny badge makes my soldiers dig in and make themselves better, then I'm all for it, and so should everyone else here that is butt hurt not being exclusive. We're all on the same team here."

Others wondered why the badge couldn't be tailored to specific MOSs.

"I don't disagree with other MOSs having their own expert badge they can earn. But a blanket Expert Action Badge is kind of silly in my opinion," wrote Kyle Semper Anticus. "Have each MOS come up with their own list of pertinent tasks they deem critical, and test soldiers on them over the course of several days, then they get their expert MOS badge. That seems reasonable to me."

Dailey, however, said that the badge is designed to apply to all soldiers, rather than being tailored to MOSs like armor or artillery.

"The EAB is about building individual skills," he said. "It also reinforces readiness, and that applies to all soldiers — not just armor or artillery."

"I would express to them to not be emotional about it," he said. "Look at the logic of it."

The award is not meant to dilute the prestige of any other expert badges, officials said.

"It's about rediscovering a culture of training your soldiers," Davenport said.

And as for the name, it's not set in stone. During the town hall, several live commenters suggested a re-brand to the Warrior Skills Badge or the Expert Warrior Badge, pointing out that the word "action" has a combat connotation that doesn't apply to this expert award.

"We solicit that kind of feedback," Davenport said. "Does it actually, in fact, improve readiness? The naming of it, again, that's subject to change as well."

Build alliances, and, for the love of god, don't turn on CNN.

This year the cadets fumbled their mission. Hard.

“If we do our job right, they’ll never go to the Army or the National Guard to begin with."

Dozens of West Point graduates have demanded state Rep. David Eastman resign from office over his ties to a right-wing extremist group.

After pandemic deaths doubled over late summer and fall, the military hasn't had any in two weeks.

Rosemary Ogbenna, 45, was charged this month by the District Court for the District of Columbia for allegedly carrying out a plot to steal more than $400,000 in benefits from elderly, mentally ill and disabled veterans she housed through her room and board business.

It's not clear whether the protest will alter the timeline for service members to begin using the new moving process, which is now expected in late 2022.

Wednesday, the U.S. Embassy in Kyiv issued an alert to U.S. citizens, warning them of “concerning reports of unusual Russian military activity near Ukraine’s borders and in occupied Crimea.”

China and Russia have been strategic partners for years.

The Airborne Object Identification and Management Synchronization Group, nested in the office of the Under Secretary of Defense for Intelligence & Security, will now lead investigations into mysterious objects in the sky.

Indiana was previously projected to take 490, but officials said Tuesday that the state has since committed to accepting 719 refugees.

West Point officials would not confirm details of the incident Tuesday.

Drill sergeant convicted of assault in viral video gets admin action, will PCS