A recently separated soldier and her active-duty boyfriend have been charged with conspiracy and cruelty to animals after a video of them shooting her service dog was discovered by authorities. 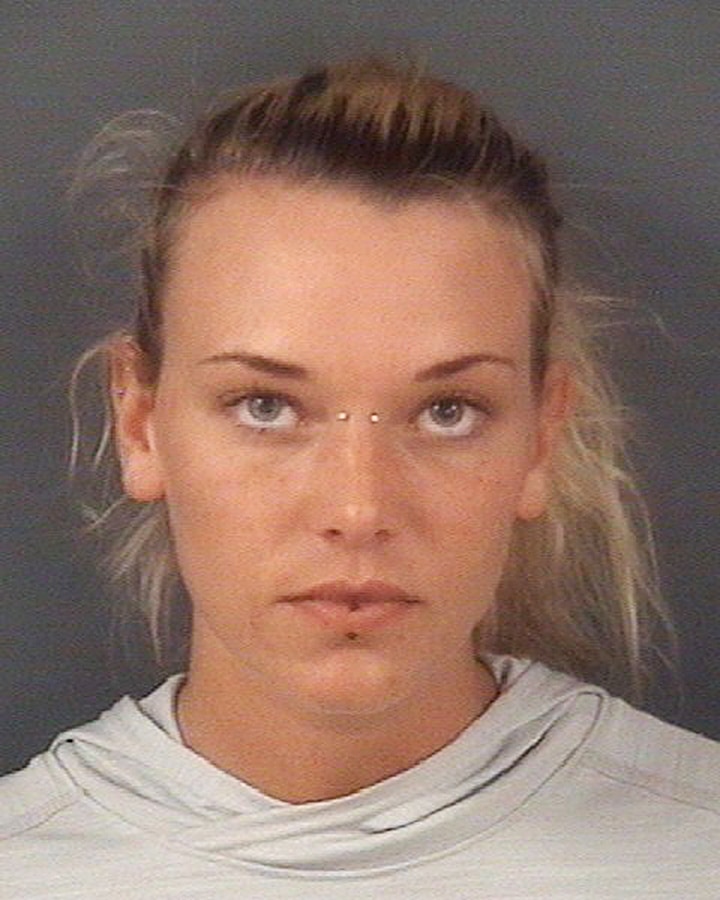 Marinna Rollins was arrested April 25, 2017, and charged with cruelty to animals. The veteran has been charged with tying her service dog to a tree and shooting it five times while a soldier filmed it.
Photo Credit: Cumberland County Sheriff's Office via AP
The case stems from a video posted online of the two tying her service dog, a pit bull named Cam, to a tree and fatally shooting it multiple times with a rifle, the Associated Press reported Wednesday.

The two can be heard giggling and laughing throughout the video, according to Cumberland County District Attorney Clark Reaves, the AP reported.

Rollins, a former multimedia illustrator, joined the Army in early 2014 and was administratively separated in January, according to Army Human Resources Command.

According to the Fayetteville Observer, Cam was originally named Huey. Rollins' husband adopted the dog shortly after separating from Rollins in January 2016, the paper reported.

When Rollins' husband, who is in the Army, learned he was being assigned to South Korea, he said Rollins begged him to keep the dog, according to the Fayetteville Observer. After the husband deployed, Rollins changed the dog's name to Camboui and got him certified as an emotional support animal for post-traumatic stress, the paper reported, citing Rollins' friends.

The paper also reported that Rollins in April began posting on Facebook that she was trying to find Cam a new home, telling a friend that caring for the dog had become too expensive. On April 17, she posted that she had a great last day with Cam and that he was going to a new home, the Fayetteville Observer reported.

Rollins and Heng appeared in Cumberland County court Wednesday. Their bail was set at $25,000 each, according to the paper.

13 thoughts China’s balloon (probably) had while floating over America

"There’s been a lot of chatter about blowing me up lately. I’m a balloon. Technically I’m already blown up! HA!"

The company behind VA's controversial health records project insists the work can still be finished in a way that benefits veterans and taxpayers.

Will more minority veterans receive the Medal of Honor?

As things got worse, death itself became a means of intervention: Funerals reunited buddies, and they quietly identified who could be next.

Why stratospheric balloons are used in era of space-based intelligence

Experts say balloons loitering at high altitudes can offer some advantages over satellites and drones — and could at least augment ISR capabilities.

VA takes to the streets to count homeless veterans

Will more minority veterans receive the Medal of Honor?