The jury is most definitely in: The Army Physical Fitness Test, for all its simplicity and efficiency, does not measure how well a soldier will perform under fire.

The Army has known that for years, officials told Army Times, and the service has spent more than a decade looking for a better way to not only measure combat readiness but also to train soldiers to that standard while reducing injuries.

They rolled it out in an early August pilot at Joint Base Lewis-McChord, Washington, where members of that state’s National Guard and special operators from 2nd Battalion, 75th Ranger Regiment gave it a whirl.

“[The ARCT] is as close physically as you can get to replicate the types of physical actions you’ll do on the battlefield,” Staff Sgt. Talen Peterson, a Ranger assigned to 2nd Battalion’s Headquarters and Headquarters Company, told Army Times on Aug. 2.

The test, designed to be given to soldiers when they report to their first units, is different from the standard APFT in a very basic way: It measures five kinds of fitness versus the APFT’s one.

“In reality, this has been in the works since the early 2000s,” said Whitfield East, a research physiologist at CIMT, which is part of Training and Doctrine Command. “Soon after we went to war, it was pretty self-evident that the APFT did not sufficiently identify the high physical demand capacities that soldiers needed to execute warrior tasks and battle drills and common soldier tasks.”

Running, sit-ups and push-ups all measure muscular endurance. They also do a great job of measuring basic heart and lung health, experts say, but don’t have a lot to do with the kind of physical fitness needed to load artillery rounds or haul wounded troops out of the line of fire.

With that in mind, CIMT sought to create a fitness test that most closely resembled the Army’s standard for combat skills: Warrior tasks and battle drills.

Those domains include muscular and cardiovascular endurance — which is measured by the APFT — muscular strength, explosive strength and agility.

“Previous tests and attempts, or revisions, didn’t get at all five of those fitness domains,” Feltwell added. “You end up leaving a gap in a soldier’s combat readiness if you don‘t train, for example, anaerobic endurance.”

A soldier performs a leg tuck during a pilot Army Combat Readiness Test at Joint Base Lewis-McChord, Washington. The leg tuck is one of six events featured in this new test, which could hit the force as early as next summer. (Stephanie Slater/Army)
2 of 5 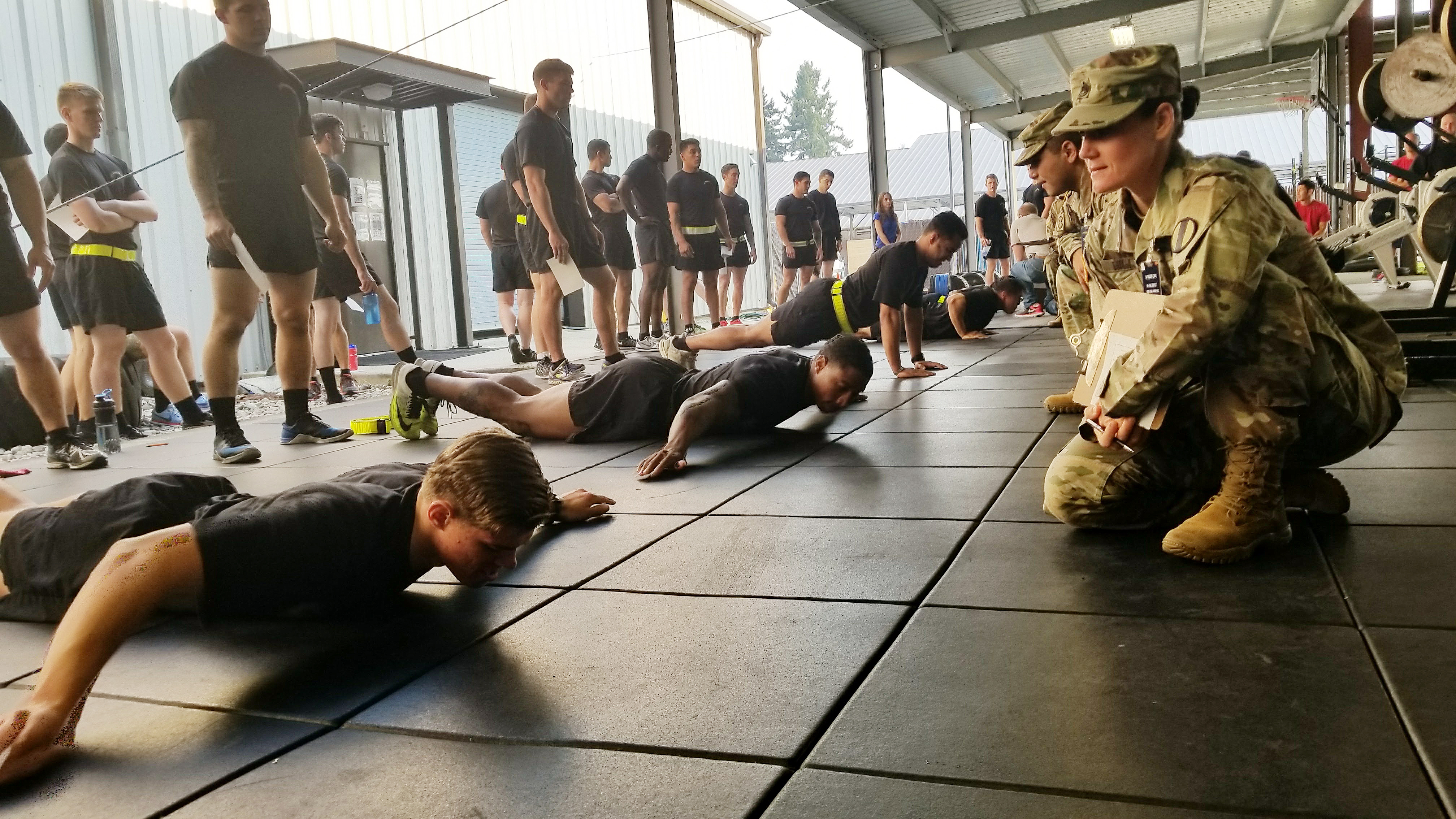 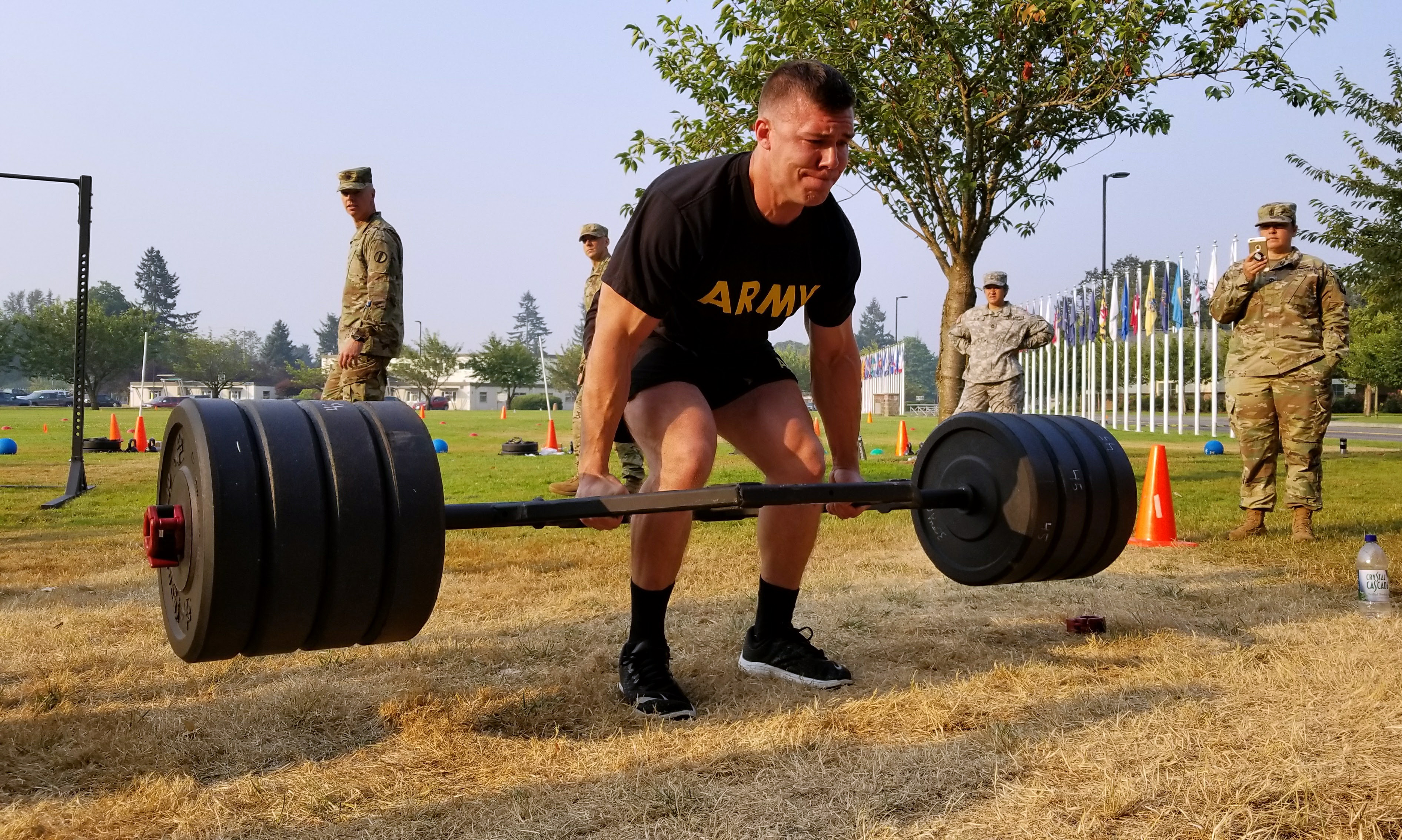 A soldier with the Washington National Guard performs a 420-pound, three-repetition deadlift during a pilot Army Combat Readiness Test Aug. 4 at Joint Base Lewis-McChord, Wash. The deadlift is one of six test events proposed in the new Combat Readiness Test. (Stephanie Slater/Army)
4 of 5 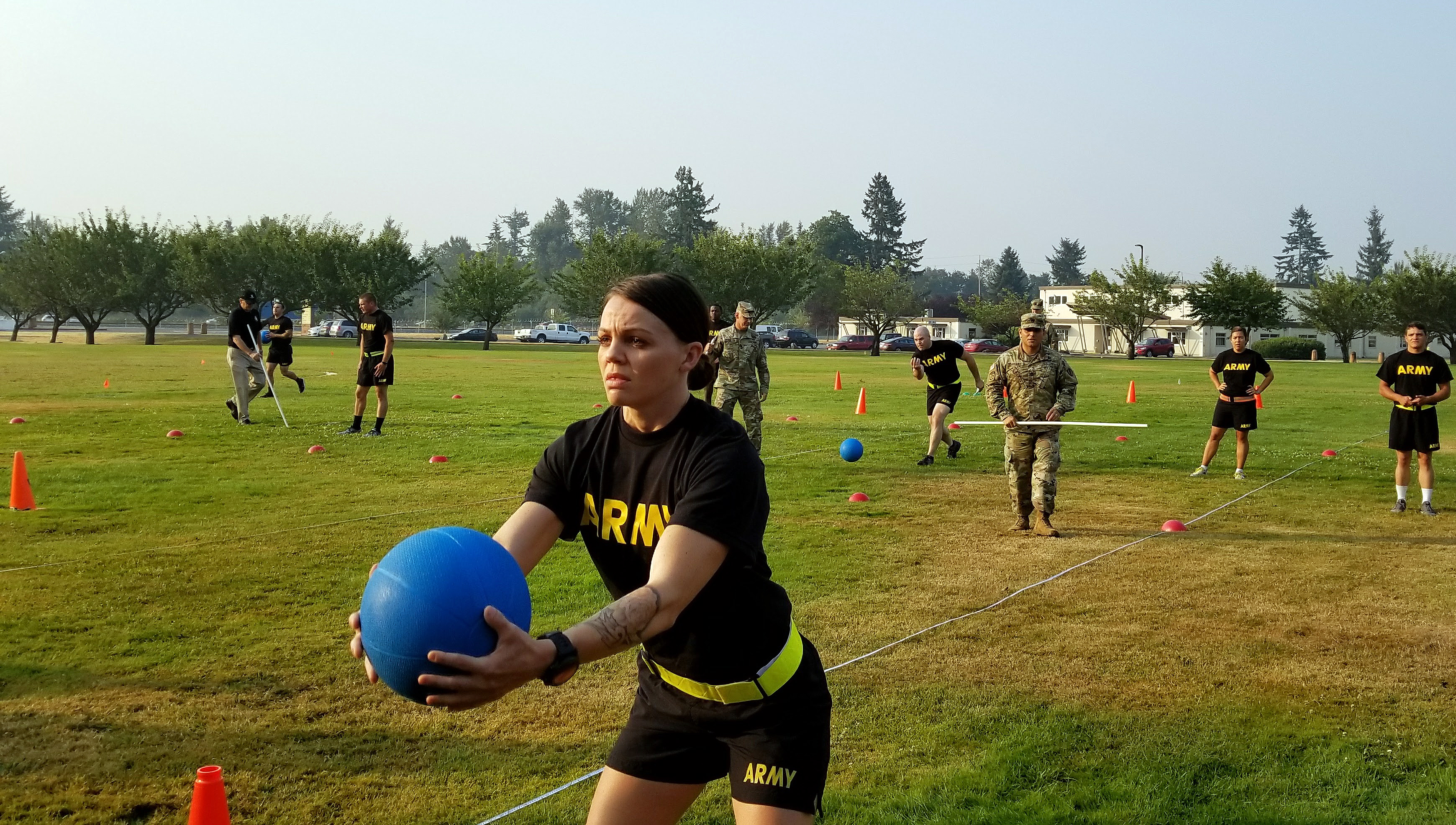 A soldier with the Washington National Guard positions a 10-pound medicine ball as part of the standing power throw test event during a pilot Army Combat Readiness Test Aug. 4, 2017, at Joint Base Lewis-McChord, Washington. (Stephanie Slater/Army)
5 of 5 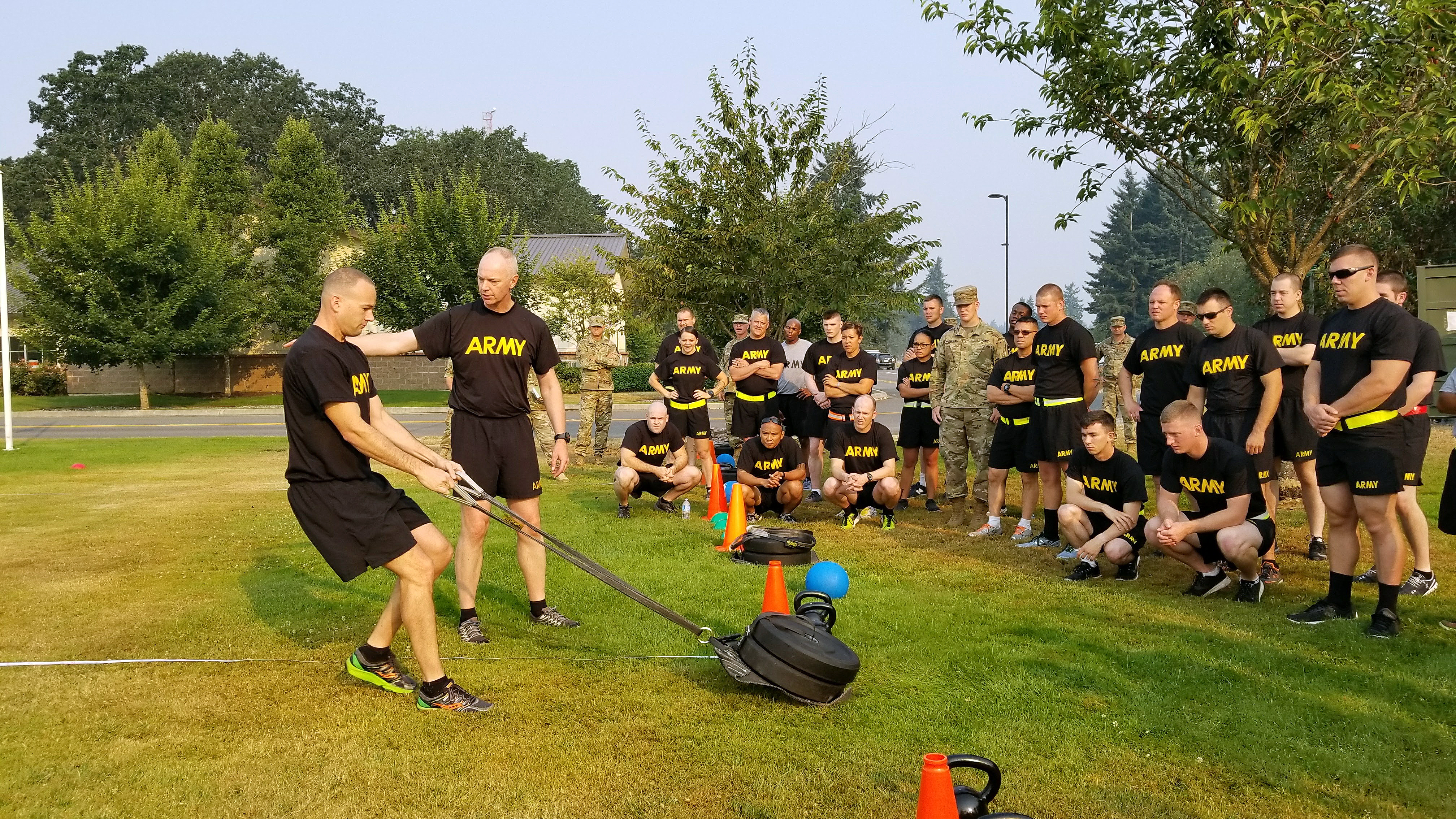 Staff Sgt. Brandon Laspe and Lt. Col. David Feltwell demonstrate how to pull a drag sled as part of a sprint-drag-carry event Aug. 3, 2017. Laspe and Feltwell are with the U. S. Army Center for Initial Military Training located at Fort Eustis, Virginia, the proponent for the Army’s Holistic Health and Fitness concept, which includes a proposed Army Combat Readiness Test. (Stephanie Slater/Army)

There were a lot of difference choices to represent all of those types of fitness.

“We then selected somewhere in the neighborhood of 30 field-expedient tests — everything from pullups and sit-ups to bench press and dead lift, to vertical jump to sumo squats — and we administered those to a large sample at Fort Riley [in Kansas] in 2014,” East said.

They narrowed those options down to six:

6. T-pushup. Soldier begins in the down position, pushes body into up position, lowers body to ground, extends arms out to the sides into the T position, and then returns to the starting position

“The sprint/drag/carry is actually pretty rough,” said Sgt. Thomas Masi, of B Company, 2nd Battalion, 75th Ranger Regiment. “I didn’t think it was going to be that bad.”

A 2017 Best Ranger Competition winner agreed that it was the most challenging event.

“I think the sprint, drag and carry — just because it’s an all-out event and incorporates a bunch of different muscle groups so it stresses you more than just an individual muscle group, said 1st Sgt. Joshua Horsager, of 2nd Battalion’s A Company.

The test’s implementation is now in the third of five phases, said Michael McGurk, director of CIMT’s research and analysis directorate.

More pilots are planned for the rest of the year, he added, including at Fort Lee, Virginia, and Fort Leonard Wood, Missouri, two hubs for basic training and advanced individual training.

The team hasn’t yet decided how to score the test, McGurk said, but there will be a basic standard to pass, and — like the APFT — it will have career implications for soldiers who fail.

It might seem like the Army has spent at least most of the century and countless man hours on improving upon the AFPT but with no deliverable results to date. And that’s because it has.

“The Army’s been working on this for decades,” Col. Rick Heyward, CIMT‘s deputy commander, told Army Times. “What we’ve had is a lot of great initiatives by many disparate efforts across the Army. Well intended, very idealistic command teams looking to make sure that they improve the overall readiness of their soldiers, but we never really had an overarching approach to this.”

The service’s most recent attempt at upgrading the APFT was scrapped in 2013 because its requirements for equipment were deemed unfeasible.

“When that test was developed, they were still under the guidance of zero equipment,” said East, the research physiologist at CIMT. “What we know is that we can’t assess muscular strength with no equipment. You have to pick something up and put it down.”

So, the tried-and-true PT test stayed in place another few years, because it was effective enough and easy to carry out twice a year.

“In the APFT, which we’ve done for 37 years, there’s no equipment,” McGurk said. “We sought a balance where we could get an adequate test, that can measure what it needs to measure, with what we would say is minimal equipment.”

CIMT also brought that fitness effort into a program called Holistic Health and Fitness, which is meant to promote fitness beyond basic cardiovascular health and even combat readiness.

“Our health care costs are expensive,” Heyward said. “And again, we’re a people-centric service, with the Army. We believe with the holistic approach — some individualized, focused training for soldiers, NCOs and officers – we’re going to have the opportunity to, down the line, reduce injury rates. Especially musculoskeletal, which accounts for billions of dollars every year in terms of health care costs [for active duty and veteran soldiers].”

That philosophy also informed the development of U.S. Army Forces Command’s Soldier Readiness Test, another combat-based fitness test that also was piloted at JBLM this summer.

The Army has spent the better part of a decade on an update to the age-old PT test, one that better measures factors like the strength and agility to effective in combat. This month, they got one step closer with a Soldier Readiness Test pilot held around the country.

The difference between that test and the ACRT is ACRT’s status as a test of record, which grades individual soldiers and can affect promotions as well as other aspects of their job.

The SRT, on the other hand, was designed as a litmus test for commanders to judge their units’ readiness and address weaknesses.

“We’ve got great, well-intended leaders at every echelon in our Army who think they know fitness, but we’ve got to standardize it, Heyward said.

The implementation of the Occupational Physical Assessment Test, another skills-based assessment, is also part of that plan.

The Army began the roll-out of the Occupational Physical Assessment Test last summer, first testing recruits before making it a requirement for soldiers looking to reclass to physically demanding jobs like infantry and armor.

“We have never really taken a holistic approach to how we deal with our people,” Heyward said. “How we maintain our people, how we sustain our people and how we increase the length of our people’s ability to sustain themselves in the Army.”

OPAT is given before a recruit reaches basic training, to assess their occupational readiness to join the Army. ACRT would be the follow-on to take a solder through their career.

“The OPAT kind of broke the dam open for us, in terms of health and fitness,” Heyward said. “We think the ACRT is the way we can fundamentally change fitness in the Army.”

The pilot testing phase of the Army Combat Readiness Test will test up to 2,000 soldiers, East said.

“We’re going to move on to capture the entire strata of the Army, to include combat service support, combat service, to combat arms,” East said.

Once this summer’s pilots are over, the ACRT moves into its next phase.

This would be “an initial fielding of the test where we put it out for a trial period, of somewhere between six and 12 months,” McGurk said.

During that period, the scoring and frequency of the test will be hammered out.

“A soldier will have to pass ACRT from reception battalion all the way through to separation,” Feltwell said.

If all goes well, and pending final approval from senior Army leaders, Heyward added, soldiers could start taking the ACRT for real next summer.

A sailor in Virginia is being credited for saving the life of a driver who crashed into the gate of the Norfolk Naval Station in Norfolk, Virginia.
Close
Now Playing

"You have to decide: what is the right thing to do?" | Dear Young American — Gary Beikirch