Mann, who towers over most people at 6 feet 5 inches, seems small here. He steps up to a black vault leading to a temperature-controlled room containing several cabinets. Mann pulls blue latex gloves from the back pocket of his Army greens and puts them on before pulling open a drawer of one of the cabinets. Resting flat in the shallow drawer is a battle flag from World War II.

The 148th Infantry Regiment. The distinct eagle crest, clutching arrows in one talon and a branch in the other. "We'll do it," proudly displayed above.

"This is the part of the collection I am most proud of," Mann said. 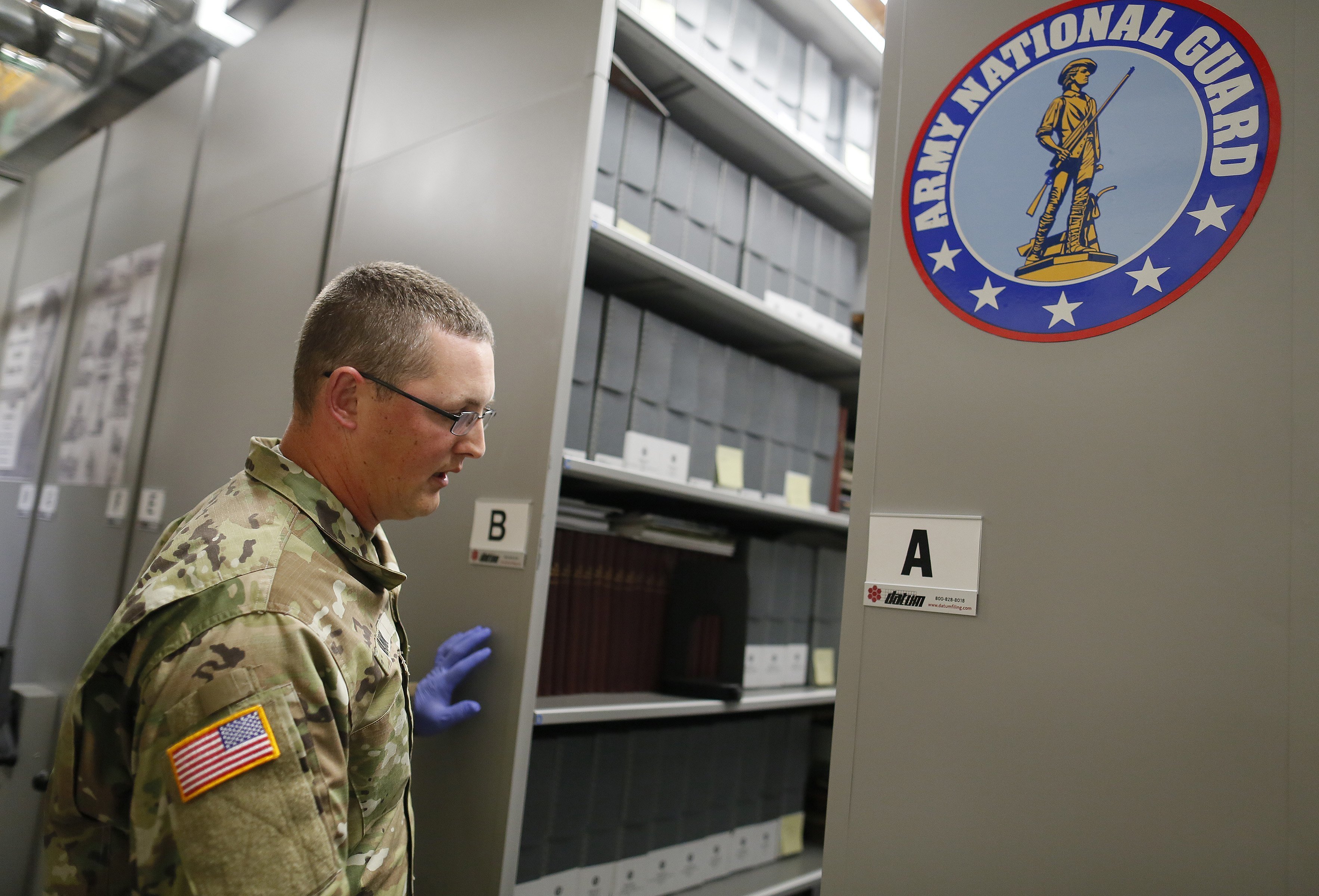 In this July 17, 2018, photo, Sgt. 1st Class Josh Mann, the Ohio Army National Guard historian, opens one of the archival filing cabinets containing historical books and documents inside the Beightler Armory in Columbus, Ohio. The Ohio National Guard is celebrating its 230 years of service. (Adam Cairns/The Columbus Dispatch via AP)
2 of 8 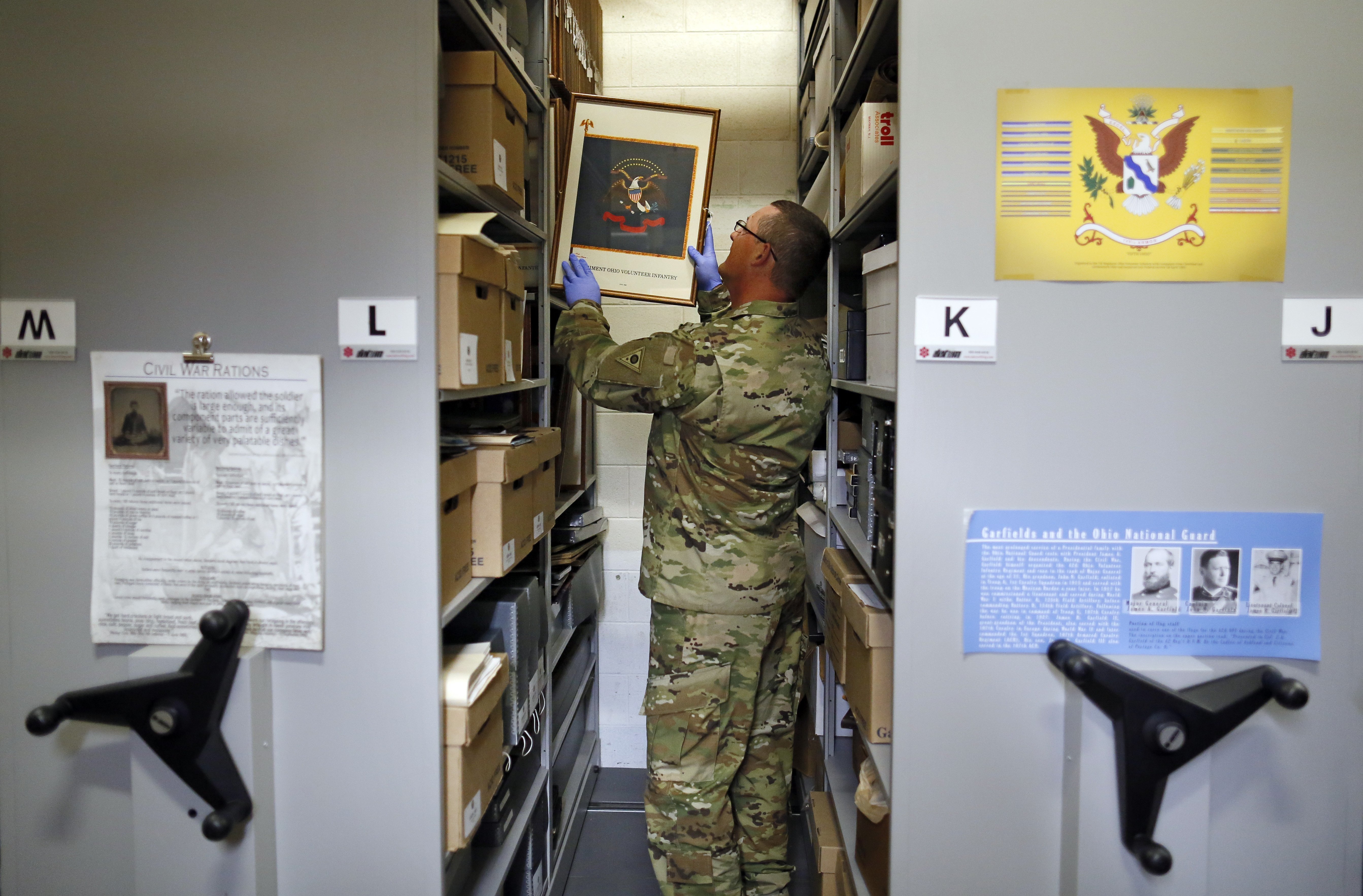 In this July 17, 2018, photo, Sgt. 1st Class Josh Mann, the Ohio Army National Guard historian, files away an artist's rendering of an infantry battle flag inside the Beightler Armory in Columbus, Ohio. The Ohio National Guard is celebrating its 230 years of service. (Adam Cairns/The Columbus Dispatch via AP)
3 of 8 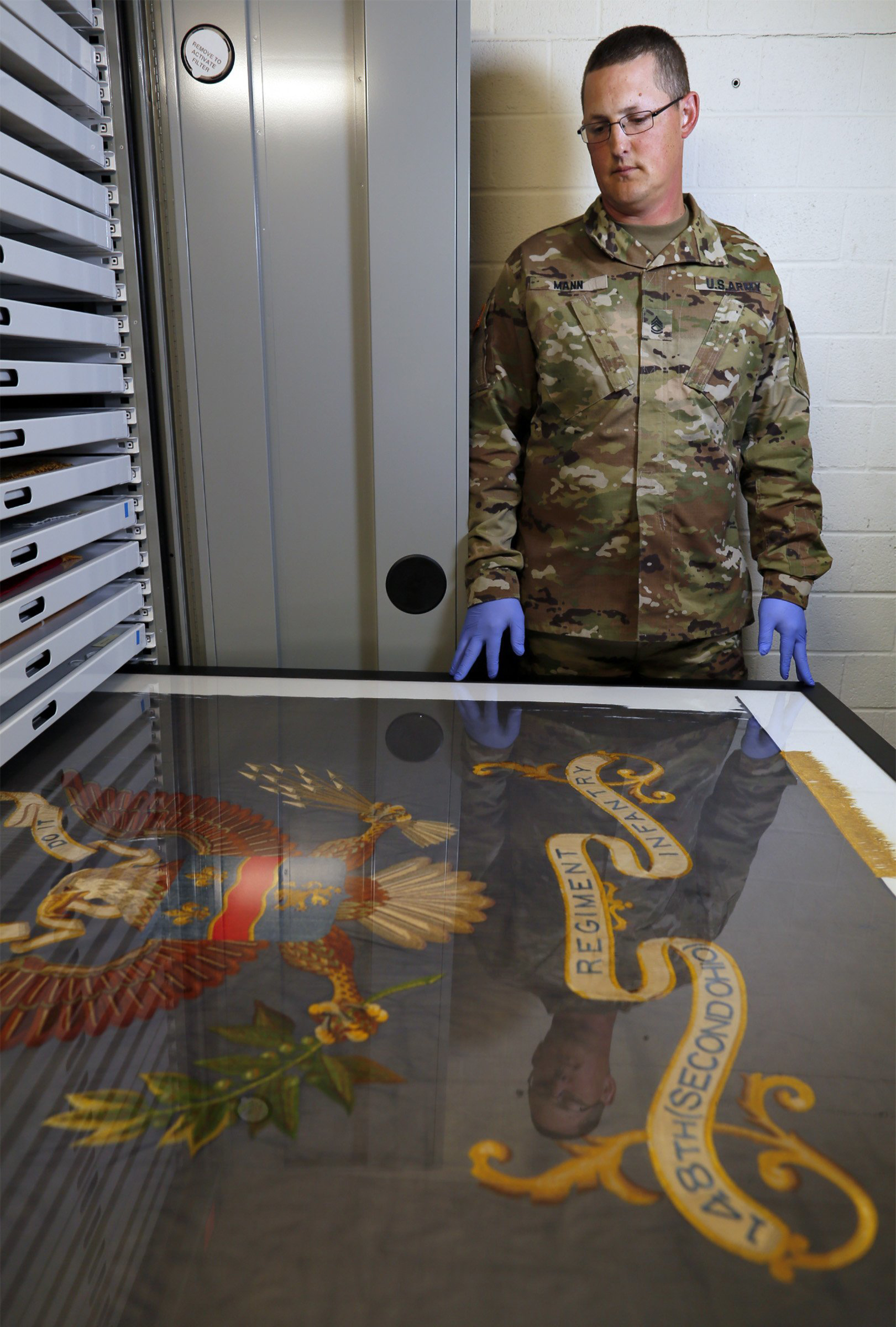 In this July 17, 2018, photo, Sgt. 1st Class Josh Mann, the Ohio Army National Guard historian, looks at a Civil War battle flag from the 148th Infantry Regiment inside the Beightler Armory in Columbus, Ohio. The Ohio National Guard is celebrating its 230 years of service. (Adam Cairns/The Columbus Dispatch via AP)
4 of 8 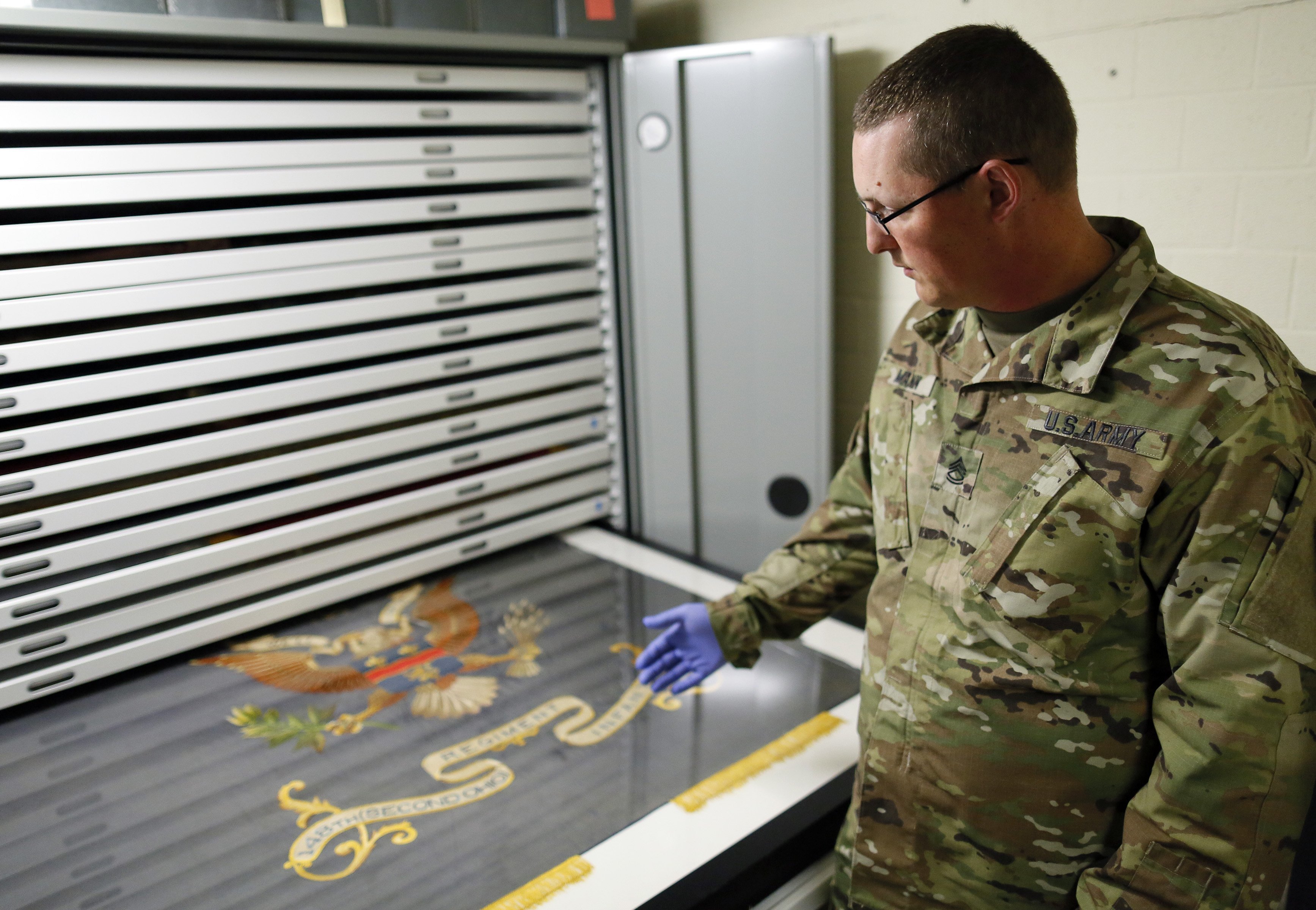 In this July 17, 2018, photo, Sgt. 1st Class Josh Mann, the Ohio Army National Guard historian, looks at a Civil War battle flag from the 148th Infantry Regiment inside the Beightler Armory in Columbus, Ohio. The Ohio National Guard is celebrating its 230 years of service. (Adam Cairns/The Columbus Dispatch via AP)
5 of 8 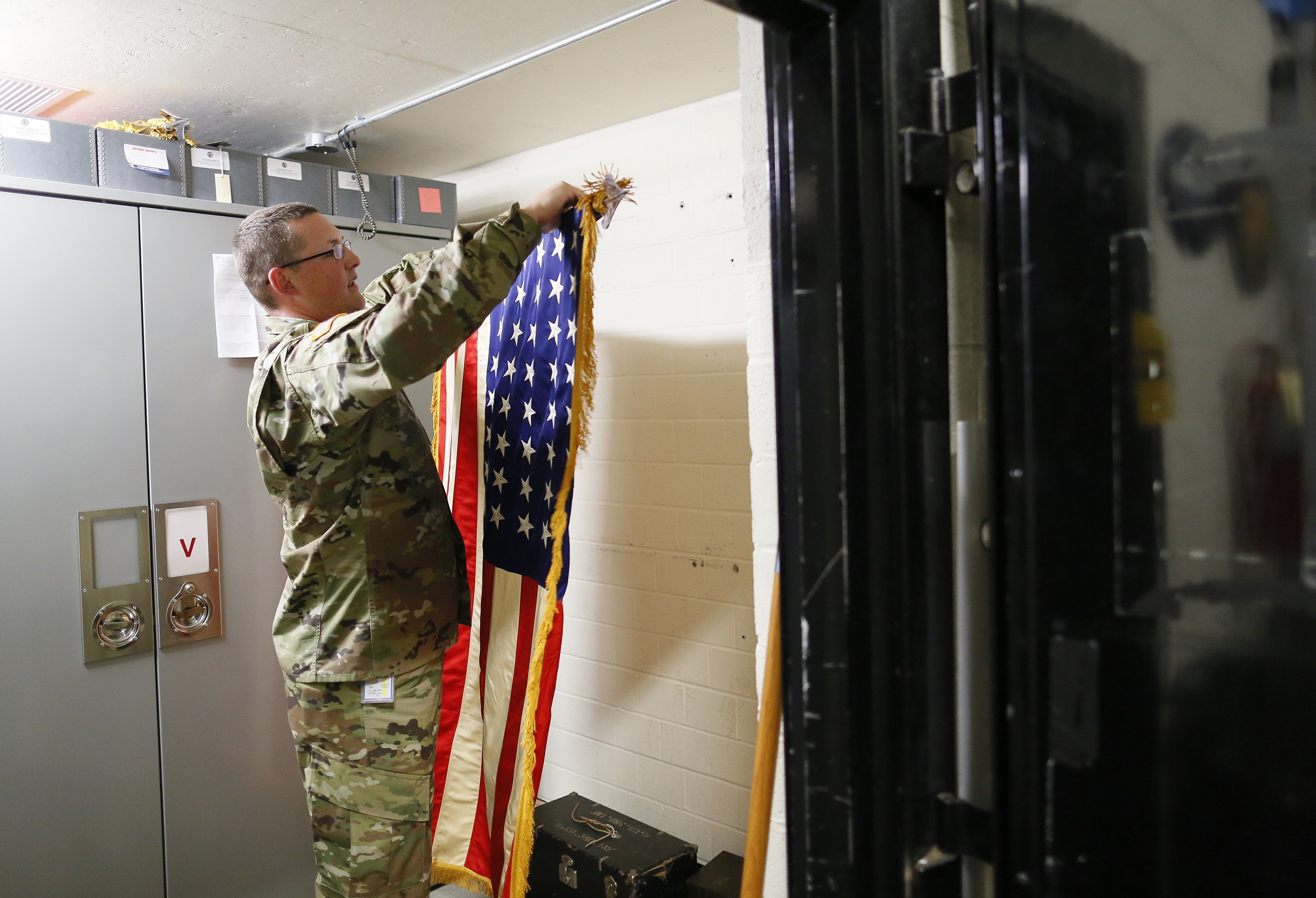 In this July 17, 2018, photo, Sgt. 1st Class Josh Mann, the Ohio Army National Guard historian, rolls an American flag that had been hanging in the temperature and humidity-controlled vault inside the Beightler Armory in Columbus, Ohio. The Ohio National Guard is celebrating its 230 years of service. (Adam Cairns/The Columbus Dispatch via AP)
6 of 8 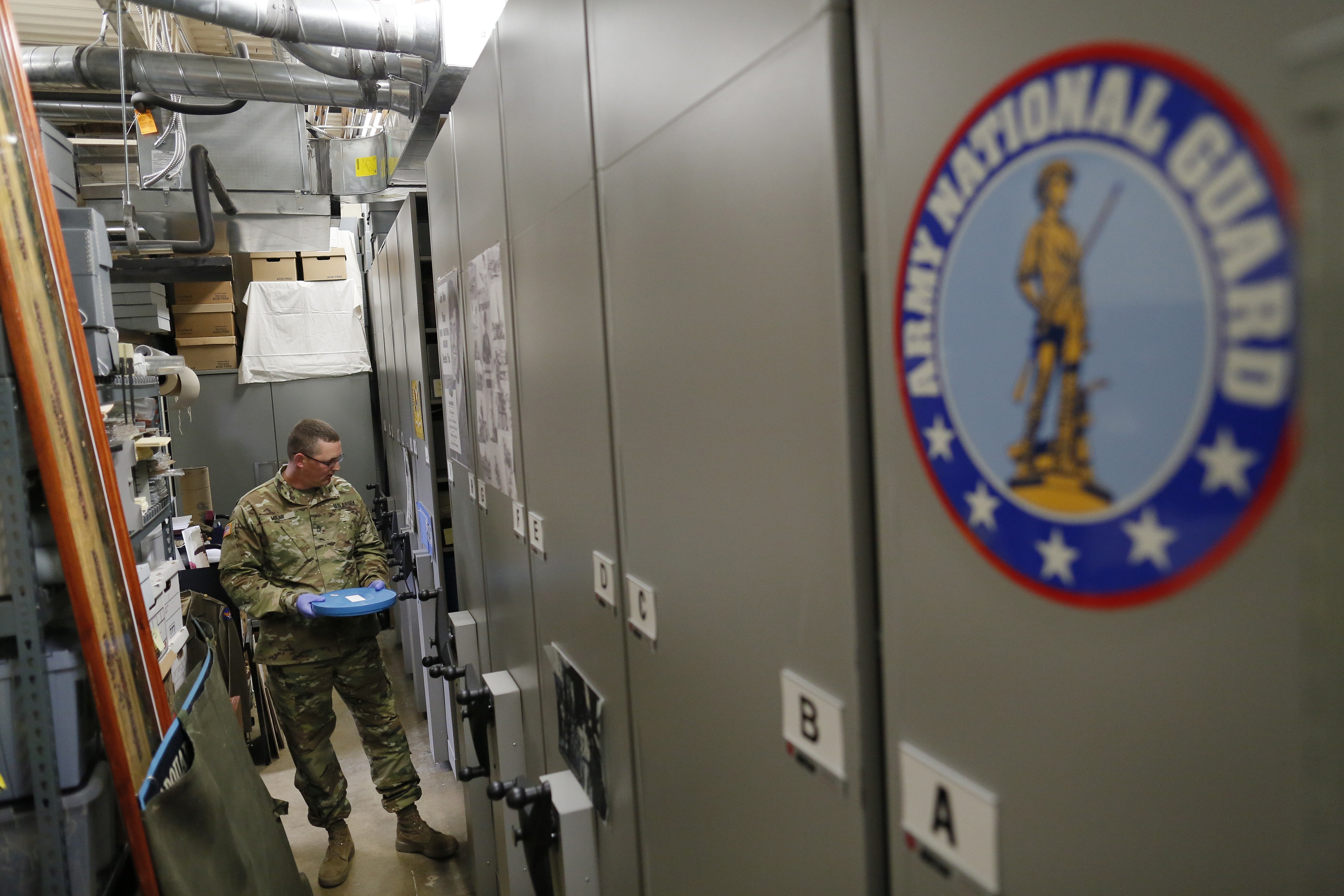 In this July 17, 2018, photo, Sgt. 1st Class Josh Mann, the Ohio Army National Guard historian, pulls a video reel from one of the large rolling cabinets storing the historical artifact collection inside the Beightler Armory in Columbus, Ohio. The Ohio National Guard is celebrating its 230 years of service. (Adam Cairns/The Columbus Dispatch via AP)
7 of 8 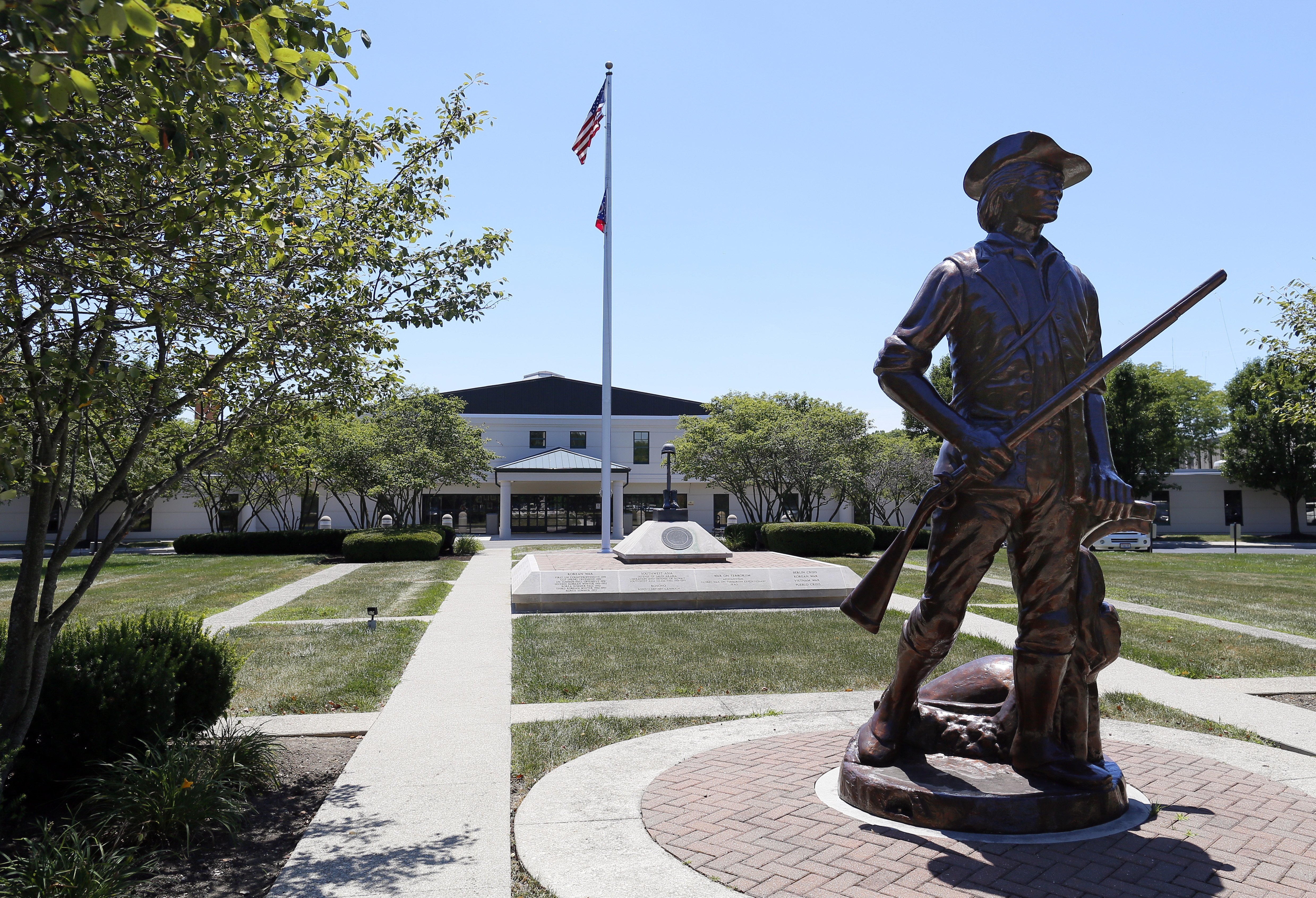 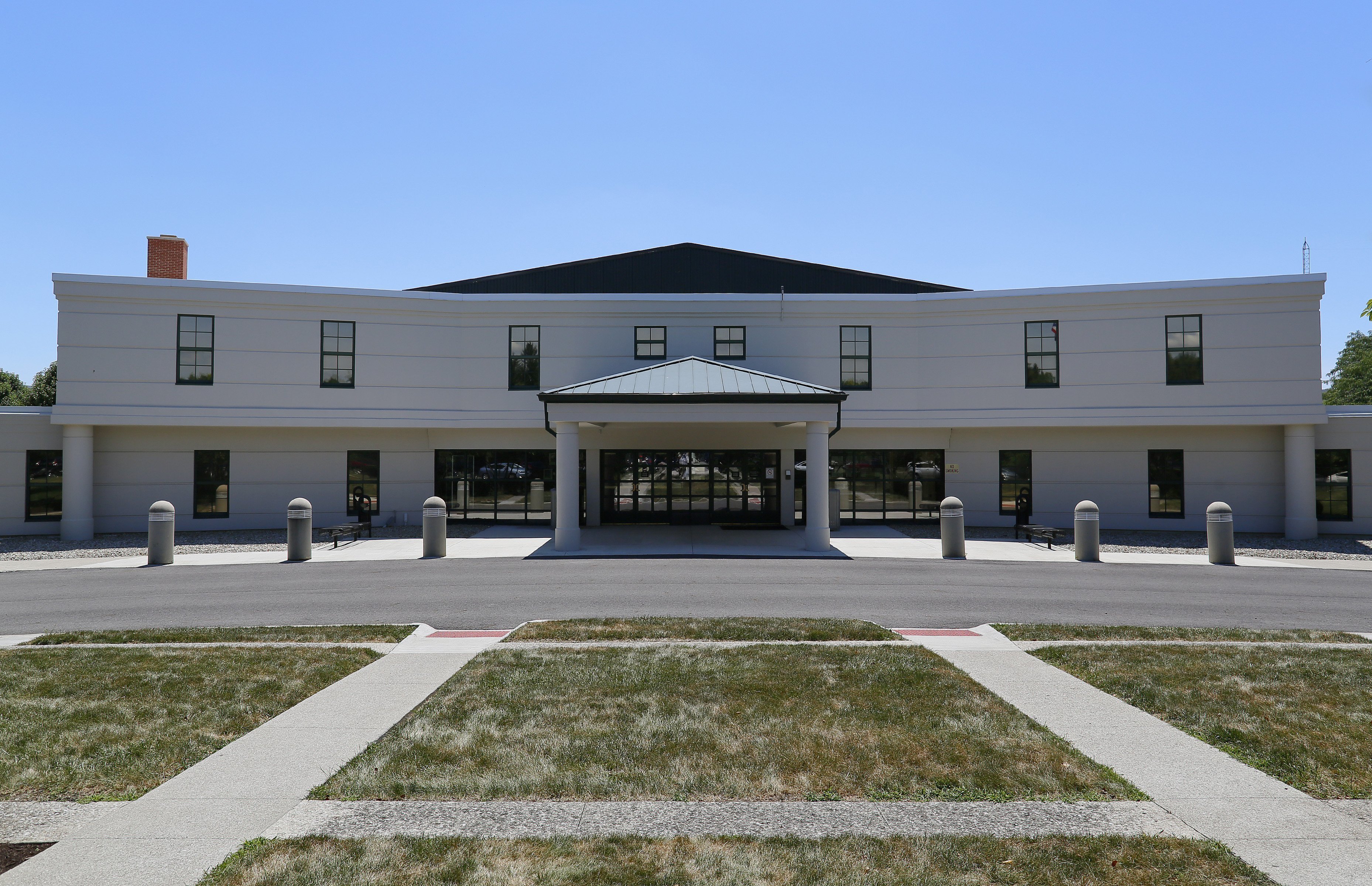 And Mann's favorite part of his job as Ohio Army National Guard historian is when he gets to share its history with others. The Ohio National Guard turned 230 years Wednesday, July 25. It was organized before Ohio was a state, originally called the Northwest Territory Militia.

The celebration at the Maj. Gen. Robert Beightler Armory in northwest Columbus was set to include a ceremonial recognition of the Ohio National Guard's service to the nation. The Guard includes the Ohio Army National Guard, Ohio Air National Guard, Ohio Military Reserve and Ohio Naval Militia, which total more than 16,000 personnel, according to its website.

Maj. Gen. Mark E. Bartman, Ohio's adjutant general, would administer the oath to two new members, and like any birthday celebration, there would be a cake.

Mann spends a lot of his time in a vault-like room with relics of America's past: guns from the Civil War and uniforms dating back a century among them. The Beightler armory is home to a huge collection of Ohio National Guard artifacts, including post-World War II battle flags.

As the historian for the Ohio Army National Guard, Mann knows each of their stories intimately.

He said his dad, Richard Mann, is the reason he works as a historian. "I like to call my dad a weekend historian," Mann said.

The elder Mann, who died in 2009, worked in a spark-plug factory and participated in historical war re-enactments on weekends. Mann was just a month old when he attended his first re-enactment.

To most kids, that might have been torture. But to Mann, it was the perfect way to spend summer vacation.

Mann joined the Ohio Army National Guard at the end of his senior year of high school to "knock down tuition costs" for college.

On July 13, 23 years later, he extended his service another six years.

Over those six years, Mann hopes to make steps toward creating a museum of sorts, where Ohioans could view items Mann and others have worked to collect.

The only place where the public has been able to regularly see part of the collection is at Ohio History Connection. The history center at 800 E. 17th Ave. on the Northeast Side has over 500 battle flags, all of them from before World War II.

The public can ask to see items in Mann's collection at the Beightler armory, but there is nowhere for them to be permanently displayed. Everything stays in those immense cabinets.

"I'm near or at, some may say over, capacity," Mann said. "(A museum) is what I'd like to leave as my legacy after these last six years."

The curator of the U.S. Naval Academy Museum wasn’t exactly sure what would be found: records indicated five display boxes long used to exhibit captured British flags from the War of 1812 actually concealed more banners underneath.

Lt. Col. Greg Rogers was the previous Ohio Army National Guard historian. Before the end of an earlier six-year enlistment period, Mann called Rogers to ask if he could do Rogers' job for a year and then decide if he would re-enlist in 2004.

"I always joke that one of my biggest contributions to the Guard is keeping Josh Mann in," Rogers said.

Mann's ability to make intangible ideas into tangible objects, Rogers said, is what makes him irreplaceable as historian. Many historians before Mann were just assigned to the post as an additional duty, including Rogers, he said. But Mann is different.

"He has a heart for history and preserving history," Rogers said. "He really wants to be here, and you can tell."

Mann wasn't part of the 230th anniversary celebration on Wednesday, July 25. Instead, he was on a 17-day trip to France and Belgium doing what he does best, educating others on the role the Ohio Army National Guard played in World War II.

“(I’ve been) growing and developing the collections into something we can use to educate soldiers and the public on what we’ve been doing for the last 230 years,” Mann said. “Soldiers are reluctant to think what they’re doing is important.”

But Mann argues that they are the most vital piece of history. He points to a pack of chewing gum from the 1940s. It sits unopened in a display case Mann commissioned. The soldier who was to receive it was captured. The gum was part of a package sent to him by his mother.

“The individual soldier’s experience speaks to me,” Mann said. “The bigger strategic Army decisions, that’s going to get written about, people are going to analyze that. But a lot of times, individual stories get left behind or forgotten.”

About Bonnie Meibers, The Columbus (Ohio) Dispatch via AP

A hard look at the the story of the Marine amphibious assault vehicle recently lost in a training exercise, the Air Force sees changes to the mess dress uniform, and Airmen in South Korea want to help you adjust to the new normal by being S.I.C.K. Also - anyone want to buy a Cold War-era missile silo? All that and more on The Briefing for Aug. 11, 2020.
Close
Now Playing

The world-shaking explosions of the atomic bomb - A look back