World War II veteran Charles Stenger received a long overdue Prisoner of War Medal this week, more than 70 years after he was captured during the Battle of the Bulge.

Lt. Gen. James McConville, the Army G-1 (personnel), presented the medal to Stenger in his home in Rockville, Maryland.

Stenger, who is now 94, said he was proud to receive the medal and honored by the soldiers who attended the small ceremony, according to an Army News Service story.

During the Battle of the Bulge, Stenger fought in the Schnee Eifel salient of Belgium, serving as a medic with the 423rd Infantry Regiment, which was attached to the 106th Infantry Division, according to the Army News story.

On Dec. 21, 1944, Stenger’s regiment was overrun and surrounded by the Germans. Stenger and his fellow soldiers fought back, but it quickly became clear that they would all be killed.

Stenger found a piece of white cloth and surrendered the remaining men; he was one of 6,697 prisoners captured during the surprise German offensive, according to Army News.

"I just felt, ‘God, when is this damn thing going to get over?’" Stenger said in "American POWs of World War II: Forgotten Men Tell Their Stories" by Tom Bird. "I kind of saw us all as caught up, the guards, everyone, in this one lousy situation. We are there because we are there, that’s all." 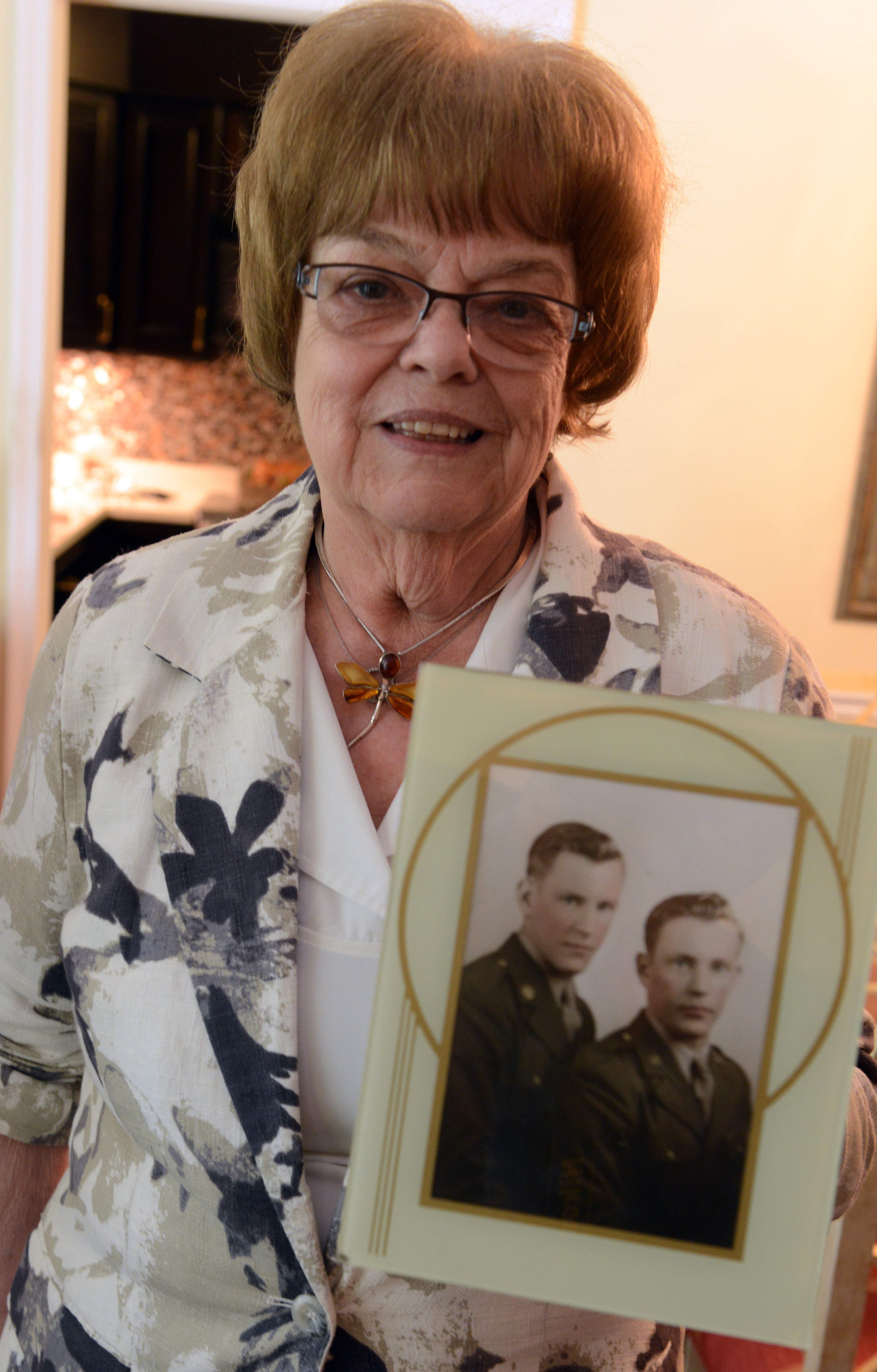 Mary Lou Guandolo, wife of World War II veteran Charlie Stenger, holds up a photo of Stenger (left), and his identical twin brother John Stenger.
Photo Credit: David Vergun/Army
Stenger was held at multiple prison camps until the end of the war. During one of the moves, he was locked inside a boxcar that was strafed by allied forces. Stenger was blown completely outside of the boxcar, landing on his back, Army News reported.

The injuries he suffered from that explosion and completely frozen feet rendered him 100 percent disabled, Stenger’s wife, Mary Lou Guandolo, said, according to Army News.

After the war, Stenger was honorably discharged from the Army. He went on to serve as a psychologist in the Veterans Administration, which is what the Department of Veterans Affairs was called then, according to Army News.

Stenger talked about being a POW in a 2003 article in the Washington Post.

"It can be a pretty rough experience," said Stenger, who at the time was a consultant to the American Ex-Prisoner of War Association. "You are under the total control of somebody who doesn’t give a damn whether you live or die. You are totally vulnerable and helpless." 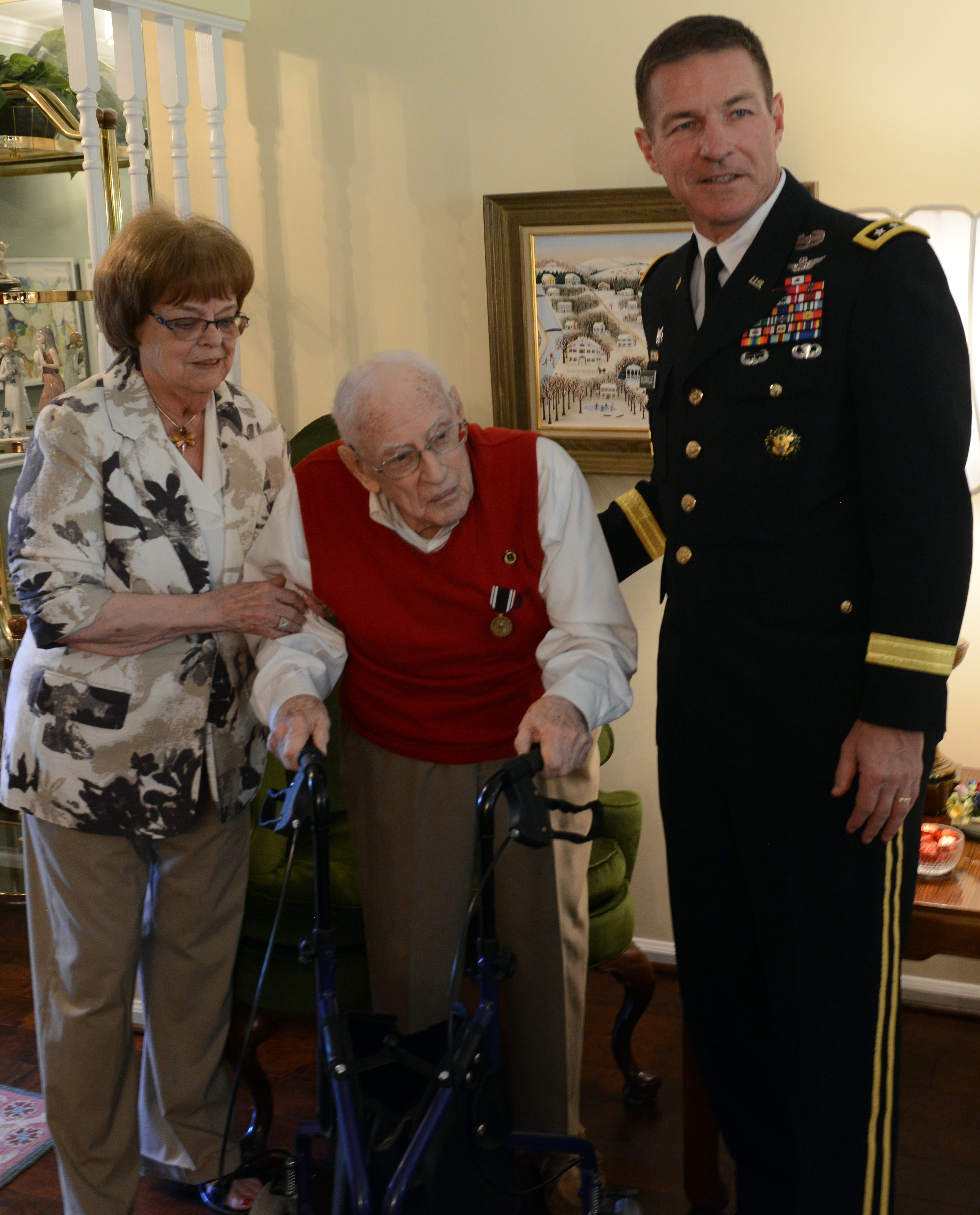 Charlie Stenger, a World War II Army veteran, received the Prisoner of War Medal Aug. 16, 2016, from by Lt. Gen. James C. McConville, the Army G-1. With them is Stenger's wife, Mary Lou Guandolo.
Photo Credit: David Vergun/Army
His own experience as a POW helped him connect with fellow former POWs who sought help from him at the VA.

After World War II, prisoners of war were not given a separate medal, according to information from the Army.

The POW Medal in its present form was authorized by Congress and signed into law in 1985, according to information from the Army.

In 1994, the Stenger family requested a review of his eligibility. The Army found that Stenger was entitled to the award, but the physical medal was never presented to him. The medal was finally awarded to Stenger this week after the case was again brought to the Army’s attention earlier this month.

The Army investigates a Green Beret's fatal parachute accident. New squad weapons are on their way to replace the SAW and M4. A Marine commander is fired in the aftermath of the sinking of an AAV, and the British Royal Navy shows how it might use jetpacks to quickly board ships at sea. All that and more on The Briefing for 10.22.20.
Close
Now Playing

How the Army’s COVID bubble expertise helped the NBA