The Army is rolling out a new pelvic protector to shield soldiers from painful and potentially life-threatening injuries caused by the debris, dirt and dust kicked up in an improvised explosive device blast.

The blast pelvic protector, a lightweight ballistic harness that protects soldiers from underneath, was designed by a team at  the U.S. Army Natick Soldier Research, Development & Engineering Center . It is meant to avoid the multiple surgeries it takes to remove the debris that commonly gets lodged in a soldier's groin area in the event of a blast. Those wounds are not only painful but can lead to deadly infections.

The piece is meant to improve on the groin-protecting flap that comes with a body armor kit, which can only protect against a fragmentation explosion from the front, said Kristine Isherwood, a mechanical engineer at NSRDEC and the project's lead, in a Tuesday phone interview with Army Times.

"It's meant to mitigate not so much a life-threatening situation as a quality of life," she said.

The harness does, however, cover a good portion of the inner thigh, protecting the femoral artery and making it look like a very short set of chaps or a pair of shorts rather than the diaper-like design of some other blast protectors on the market.

That design was the key to the whole project, said lead designer Cara Tuttle, because they knew if it looked too ridiculous, soldiers wouldn't wear it.

"The shape of the design came about due to considering soldier acceptability. If something isn’t designed with this sort of 'cool' factor, then soldiers are less likely to wear it," she said. "The factor that it looks like a harness and not a diaper, for instance, helps make it more acceptable to soldiers to wear."

The team decided early on that it should be worn outside the uniform, rather than as an undergarment or built into uniform pants, for several reasons.

"One clear thing is hygiene issues," Isherwood said. "It’s easier to have a separate piece where the guys can launder their trousers separate from this protective equipment. And you can visually confirm that yes, they’re wearing it, they didn’t forget it over at the laundry." 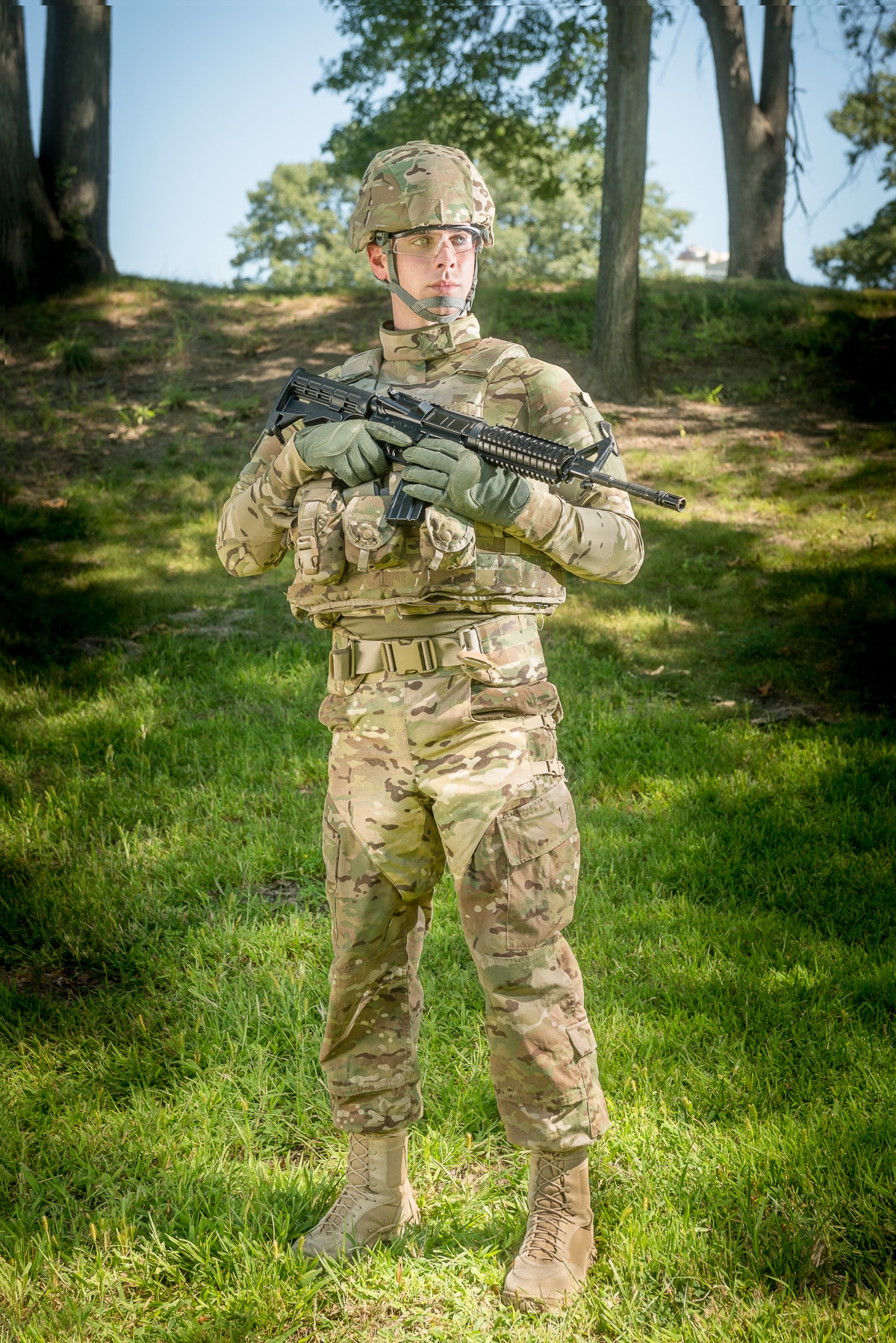 Engineers and designers at the Natick Soldier Research, Development and Engineering Center, or NSRDEC, have patented a blast debris protective harness. The harness is worn outside the pants and hugs the body without hindering movement.
Photo Credit: David Kamm/Army
There are some commercially available blast protection underwear on the market already, but they wouldn't be of use in an Army where many soldiers forgo that layer altogether.

"We did look at some boxer-type things that even had a pelvic protector," Isherwood said. "We knew that the hardened cup wouldn’t be comfortable."

The outerwear also offered the best fit, because it can be adjusted on-the-go and fit snugly against the pants rather than rubbing on skin.

"It’s cut not only to allow for mobility but also to allow access to the pockets," Tuttle said. "As far as the fit, it has buckles at the hips, which also have a little bit of elastic there, so you can adjust the buckles to fit pretty snugly. And as they bend and move, that elastic there allows it to flex with the body and helps to maintain the fit."

The harness also adds minimal weight and bulk to a combat kit because it's made of layers of Kevlar, woven in a zig-zag pattern, that lay flat but also keep dust and debris from blasting through seams.

The team finished the design in 2012 and handed it over to the product manager for soldier protective equipment at Natick, which helped refine the design and secure the patent for it.

Now they're working on fielding the harness, NSRDEC spokesman David Accetta said. Soldiers can expect to start seeing these protectors at the end of fiscal year 2017, said Debi Dawson, a spokeswoman for PEO Soldier.

There are also opportunities for the other services to pick it up.

"I imagine if they had an interest in it they could talk to PEO [Soldier] about it," Isherwood said. "From a commercial perspective, there’s an interest in this type of item for first responders."