If you're willing to give the Army another year, there's at least $10,000 in it for you

Soldiers who have the option of leaving the Army before October could land a big pile of money if they stay in -- six figures for just 12 more months, in some cases, as well as choice assignments or schools when possible.

The 2017 National Defense Authorization Act requires the active Army to get up to 476,000 soldiers in the next eight months, which is 16,000 more than they had planned.

To break even, they're looking to get 9,000 more soldiers to reenlist, with big incentives.

"Is it dire? No. But we need more soldiers," Sergeant Major of the Army Dan Dailey told Army Times in a Jan. 11 interview. "We need to do this pretty rapidly."

To do that, the Army is offering soldiers whose terms of enlistment are up this fiscal year $10,000 to extend their contracts for at least 12, but up to 23, months. The fiscal year ends Sept. 30.

The Army also has extended soldiers' decision window up until the day of their Expiration Term of Service, or ETS, rather than the usual 90-day deadline.

"That soldier within 90 days of his ETS date that says, 'You know what? I don’t want to reenlist for three more. I can give you 12 more months,'" said Sgt. Maj. Mark Thompson, a senior Army career counselor. "Here’s 10 grand."

And for soldiers who are either in a critical military occupational specialty, or those who decide to re-class and secure a training spot in a critical MOS, there's a $13,000 incentive on top of whatever selective retention bonus already being offered for those high-demand jobs. 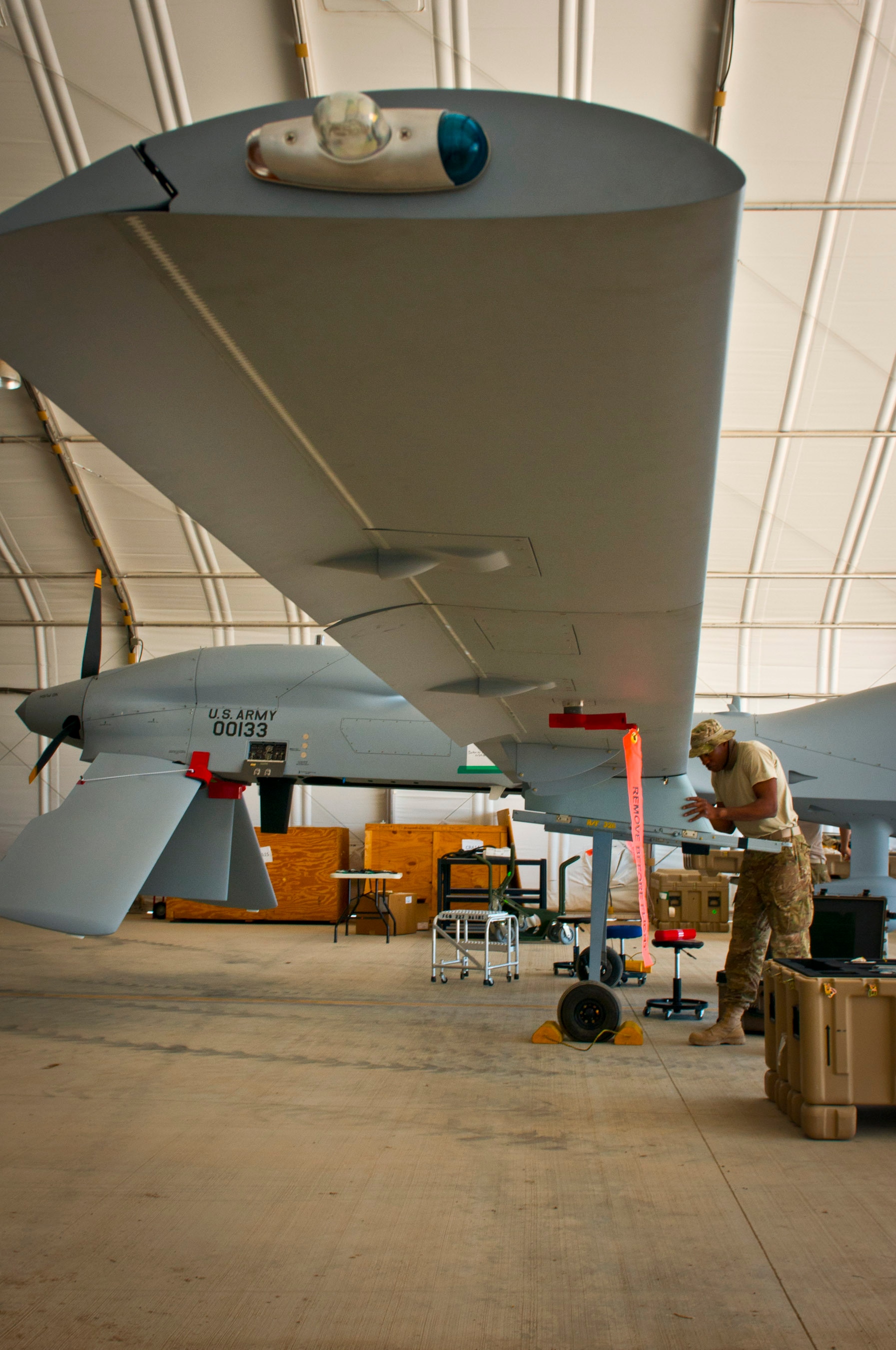 Pfc. Roddirick Noel, who is with Company F, 2nd Battalion, 27th Infantry Regiment, assembles a Grey Eagle unmanned aerial vehicle while deployed to Afghanistan. The Army is offering up to $13,000 in additional bonuses to retain soldiers in certain high-demand military occupational specialties.
Photo Credit: Sgt. Ken Scar/Army
That trajectory changed, however, with the 2017 NDAA.

As soon as the president signed the NDAA on Dec. 27, the Army kicked into high gear to put together a strategy that would quickly increase the size of the active component. And leaders decided that retaining existing soldiers was the best -- and fastest -- way to make up most of the growth.

For perspective, 9,000 soldiers is more than twice the number the Army was planning to reenlist this year, Thompson said.

The remainder will come from retaining 1,000 more officers and recruiting 6,000 new soldiers on top of the goals already set for this year.

Say you're due to ETS any time between now and October. Unless you're absolutely dead-set on getting out, Dailey's first bit of advice is to talk to your career counselor.

While any soldier at the end of their contract can extend for $10,000, there's even more incentive for those in critical MOSs to reenlist.

"An 11B specialist that reenlists for three years will get a $2,500 bonus," Thompson said, per the latest selective retention bonus numbers. "The kicker makes that a $15,500 bonus."

According to the new SRB charts, which took effect on Jan. 20, the Army is giving big bonuses in a range of MOSs, from intelligence and special forces down to air defense artillery and aviation.

All of that is before the $13,000 kicker the Army is adding on just for reenlisting this year.

It's a lot of money to hand out, Dailey said, but it's cheaper than bringing in and training 9,000 recruits.

As the Army tries to grow by 28,000 soldiers, it is offering cash bonuses as well as, when possible, a choice of duty station or school to soldiers who are willing to extend their time in uniform. Here, a soldier with the 69th Air Defense Artillery Brigade signals another soldier when to stop rotating the MIM-104 Patriot launching station.

And to sweeten the deal, counselors are authorized to look for coveted assignments or training opportunities.

A soldier who wants to leave Fort Hood, Texas, and is willing to reenlist for the chance to move to Fort Bragg, North Carolina, could get that opportunity.

"Sometimes soldiers will say, ‘If you send me to airborne school, I’ll reenlist,'" Dailey said.

That's also a possibility, Thompson said, but career counselors will be able to make offers on a case-by-case basis.

While the reenlistment program has been hammered out, the Army isn't quite sure where they're going to put all of these new and additional soldiers. Nor are they sure how letting reenlisting soldiers pick their next orders will affect force structure.

"We’ll assume some risk in overpopulation in some places where soldiers want to go," Dailey said. "We’ve said, 'okay, let’s not wait on that.'"

The next step is to come up with a recruiting push that doesn't include lowering standards.

"When we grew the Army during the big war years, we did drop standards," Dailey said, but that's not the plan this time.

The Army is looking at more local recruiting and, potentially, some new marketing strategies, he added.

Unfortunately, all of this is going to cost a lot of money, and the Army doesn't have a new 2017 budget to match the NDAA.

"Now, we went from a downsizing Army to an end strength increase, but our funds are not unlimited," Thompson said. "We may have to shut off this money again."

Though there's a scramble to get the numbers up to par for this year, Dailey said the bonuses and any recruiting incentives aren't meant to be a quick fix.

In the short term, $10,000 or $13,000 might keep a soldier in for an extra year, or encourage them to reenlist for several years, Dailey said, but the hope is that the investment will keep good soldiers in even longer.

"We’re going to maintain quality, we’re going to be focused on readiness – because this is not a numbers game for us," he said.

The panel will have 13 new faces this year, more than half of its total membership.

No initial evidence or eyewitness testimony pointed to his POW status.

Cosmas D. Eaglin Sr. was recognized for his years of dedicated service across three military conflicts.

No U.S. troops or civilians were harmed in the operation.

Housing allowances are increasing for some localities, but is it fair?

With so many platforms online, how will tomorrow’s Army share data?