Family members of the three people shot to death in 2015 by a Fort Hood soldier, who then turned the gun on himself, have filed a federal lawsuit against the Army for failing to follow domestic violence regulations that they say led to the murder-suicide.

On Feb. 9, 2015, Dawn Larson Giffa called her husband's Fort Hood command to report a domestic violence incident. Less than two weeks later, after the Army had released him from confinement to the barracks, he killed his wife and two neighbors with a newly purchased handgun.

The Army failed to properly handle the case and protect Giffa and her son, as well as the families of neighbors Lydia Farina and Steven Guzman, according to court documents. The lawsuit also states that a series of regulation violations committed by the Army allowed Spc. Asate Giffa to remain in military custody — rather than local law enforcement — then buy a firearm and track down his wife.

"The Army violated and failed to follow its own mandatory regulations and failed to exercise reasonable care and thereby made the situation more dangerous to the health and safety of Dawn Larson Giffa, the Farina family and the Guzman family," attorneys Joseph Shreiber and Erik Knockaert wrote in a brief filed Tuesday in the Western District of Texas.

Giffa's command could have reasonably assumed that releasing the soldier while his wife was staying across the street, with no ID or access to money to leave town, would have caused danger to both her and their neighbors, the lawsuit alleges.

A spokeswoman for the Army declined to comment due to the ongoing litigation.

'He will kill me'

In early February 2015, Spc. Giffa and his wife were preparing for a permanent-change-of-station move to Georgia, according to the lawsuit.

Dawn, a nursing student and Canadian citizen, told her husband that she intended to stay behind in Killeen, Texas, with her 3-year-old son until she finished school.

"Spc. Giffa took this news poorly," according to the suit.

On Feb. 9, he took away their passports and green cards, as well as Dawn's credit cards and money, according to the lawsuit. A verbal argument got physical when, according to neighbors, Giffa grabbed his wife outside their off-post home and slammed her against his truck, holding her by her wrists.

Neighbors called the Killeen Police Department, who upon hearing that Giffa was a soldier, told Dawn to call the Fort Hood military police and her husband's commanding officer.

According to Army regulation, installations and local law enforcement are required to have a written memorandum of agreement on how to handle arrests of service members in the community.

"Federal law recognizes that civilian law enforcement authorities are normally responsible for investigating actual or suspected criminal activity by service members that occurs outside of a military installation," according to the brief.

Further, the attorneys wrote, representatives from the Army and the City of Killeen told them that no such agreement exists, and it has been policy for the police department to refer soldier accusations to military authorities.

Dawn and her son spent the night of Feb. 9, 2015, across the street, at the home of Lydia and Michael Farina, who were also good friends. In the morning, she called Giffa's commander, who said the soldier would be put on 48-hour watch, confined to the barracks for a week, and issued a 500-foot restraining order. 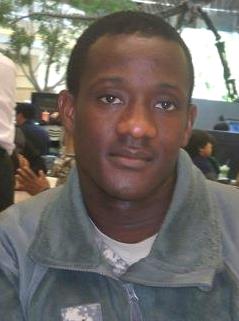 Giffa
Photo Credit: Courtesy photo
Two MPs showed up that afternoon and hauled Giffa away in handcuffs, according to the suit. He came back with two escorts the next day to get his car, and again several days later to search for Dawn's identification documents and credit card, which she never got back.

Giffa was spotted twice driving in the neighborhood over the next week, in violation of the no-contact order. But his command failed to enter both the order and the violations into the National Crime Information Center database, which would have alerted local law enforcement.

"This would have prevented Spc. Giffa from obtaining a gun by notifying pawn shops, gun shops and sporting goods shops in Killeen, Belton and Temple, that Spc. Giffa had a no-contact order put in place and had violated it," the attorneys wrote.

Dawn went on post for an Army family counseling session on Feb. 16 or 17, according to the lawsuit, where she learned that Giffa had been put into an anger management class.

"If you release him, he will kill me," she told the counselor, according to the attorneys.

The Army had a responsibility not only to report Giffa's situation to the national crime database but also to offer help to his wife, according to the lawsuit.

"At no time during the week after Dawn reported domestic violence against her did the Army notify Dawn Larson Giffa that she could qualify for financial and logistical support from the Army in relocating to temporary housing away from her abuser," the attorneys wrote. "Support is required in domestic abuse cases."

Army regulations allow for temporary hotel and other relocation funds to protect domestic violence victims. But they didn't offer them in this case, according to the lawsuit, and so when Giffa was allowed to return home on Feb. 18, his wife once again took shelter across the street.

On Feb. 22, he knocked on the Farinas' door, demanding his wife come home. When she declined, he left and came back with the gun.

The ensuing fight resulted in the death of Lydia Farina in front of her husband and children. Giffa dragged Dawn outside and beat her, alerting neighbors Steven and Christina Guzman — aunt and uncle to Lydia — to the situation.

Giffa fled when he saw them, allowing Steven to pick Dawn up and bring her inside. Meanwhile, Christina went to retrieve the children, finding her niece dead inside.

Giffa returned and shot Christina multiple times, but she managed to get herself back home to tell her daughters to stay inside. Giffa shot Steven Guzman — who later died of his injuries — before grabbing Dawn and bringing her across the street to their home.

There, according to the lawsuit, he shot her three times in the torso, once in each arm, and once in the head before taking his own life.

Based on Dawn's conversations with the command, the lawsuit alleges, the Army should have known that Giffa posed a danger to his wife, that she had nowhere but her neighbors' home to go, and that releasing him without proper law enforcement notification would multiply the danger beyond his wife to the people who were helping her.

The lawsuit seeks damages for psychological repercussions as well as loss of income for Dawn's parents and son; Michael Farina, his wife's mother and their children; and Christina Guzman and her children because of the Army's alleged negligence.
About Meghann Myers

The Marine who was a duck (yes, an actual duck)

Meet the "Devil duck" who could drink like a Marine.

The Pentagon is seeking to give Ukraine what it needs to defend against Russian drones targeting the embattled country's energy infrastructure.

The Army piece of a growing U.S. footprint in Philippines, Indonesia

Soldier charged after allegedly firing weapon into homes while drunk