Army personnel boss nominated to be next vice chief of staff

The Army's top personnel officer is on tap to be the next vice chief of staff, according to a nomination received Monday by the Senate.

Lt. Gen. James McConville, currently the deputy chief of staff for personnel, would replace Gen. Daniel Allyn as Army Chief of Staff Gen. Mark Milley's No. 2. He also would be the officer in charge of the day-to-day operations of the Army.

The Senate received McConville's nomination and referred it to the armed services committee, according to the congressional record.

In addition to replacing Allyn, who has been vice chief since 2014, McConville would pin on a fourth star if he's confirmed. 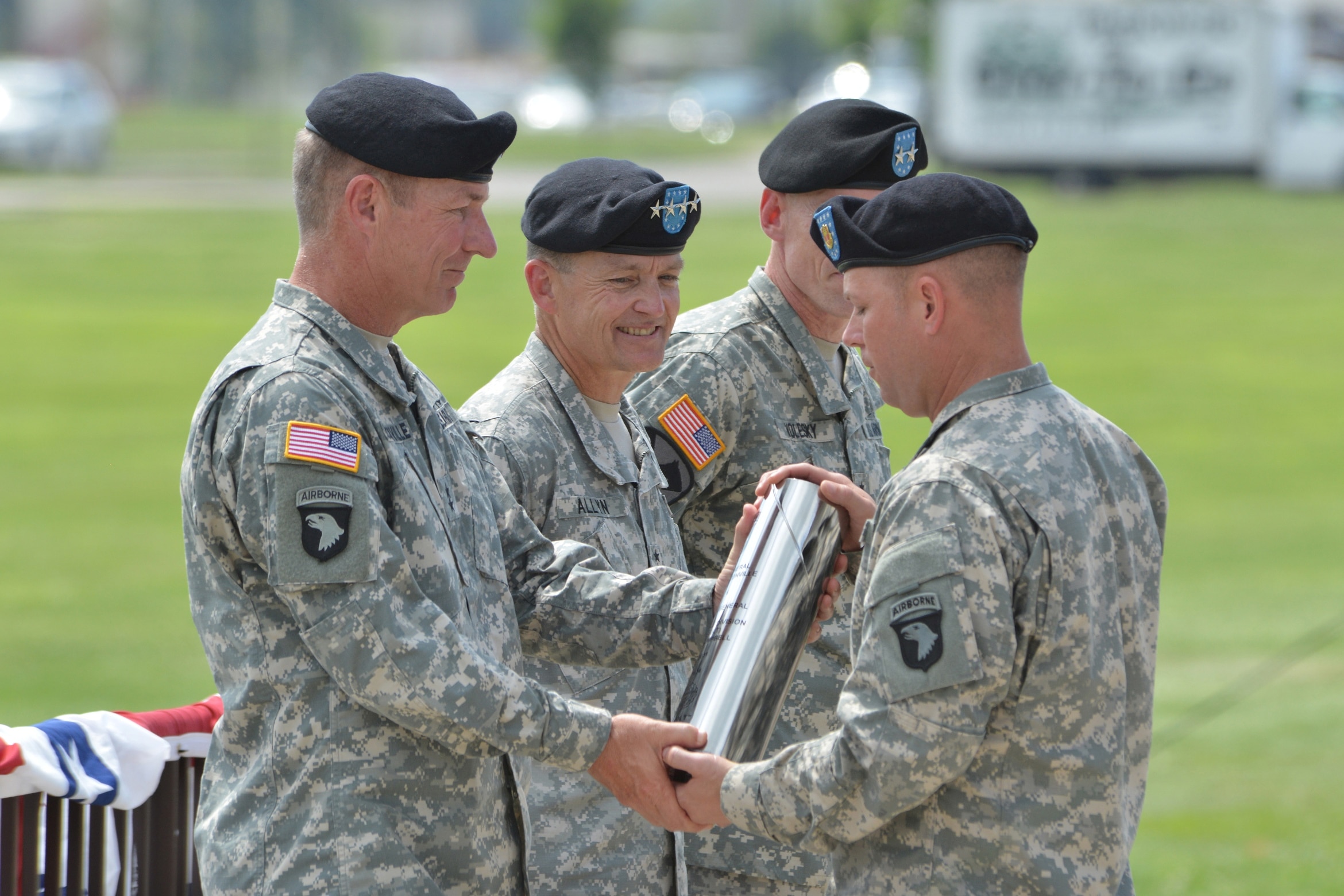 Then-Maj. Gen. James McConville (left), outgoing commanding general of the 101st Airborne Division, is presented with a ceremonial artillery shell casing as Gen. Daniel Allyn (center), then the commanding general of Army Forces Command, looks on during a change of command ceremony in 2014. McConville, now a three-star, has been nominated to succeed Allyn as the Army's vice chief of staff.
Photo Credit: Larry Noller/Army
Since taking over as the head of the G-1 office in August 2014, McConville has presided over numerous changes to the Army, from end strength reductions to innovations in the assignment process.

The Iraq and Afghanistan war veteran was commissioned as an infantry officer after graduating from the U.S. Military Academy in 1981, before transitioning to aviation and qualifying on the OH-58 Kiowa Warrior, AH-64D Longbow Apache, AH-6 Little Bird, AH-1 Cobra and others, according to his official bio.

Before becoming the Army G-1, McConville, a Master Army Aviator, commanded the 101st Airborne Division at Fort Campbell, Kentucky, leading the division headquarters on a deployment to Afghanistan. He also commanded 4th Brigade, 1st Cavalry Division, at Fort Hood, Texas, including on a deployment to Iraq.

His past staff assignments include chief of the office of legislative liaison, deputy commanding general of the 101st Airborne Division, and executive officer to the vice chief of staff of the Army.

The manslaughter trials for three defendants have been delayed following alleged "threatening" comments made by a Marine colonel.

State Guard units have faced exhausting demands in the past two years dealing with COVID-19, natural disasters and other military deployments.

Oshkosh has developed a hybrid electric Joint Light Tactical Vehicle as militaries worldwide warm up to the concept.

History and myths of the dreaded ‘Dear John’ letter

The book "Dear John: Love and Loyalty in Wartime America" explores the history and future of the military breakup.

The golden hour is a concept that presumes that some deaths are preventable if appropriate and timely care is provided.

Students’ scores in DoD schools among highest in the nation, report says

Students with disabilities and Black and Hispanic students also scored consistently higher than their peers, according to the analysis conducted by the Government Accountability Office.

He told investors he was a spec ops war hero. Prosecutors say it was a ruse.

Derek Robert Hamm, 38, faces up to 20 years in prison for 33 different charges against him, including wire fraud and stolen valor.

In his first public remarks since the attack, Eugene Goodman said his Army training kicked in as the situation worsened.

More troops could be put on alert for Ukraine response

The Pentagon is not ruling out putting more than the original 8,500 on alert.

Bonnie Jean Lawless Diaz, who pleaded guilty, was sentenced for her role in a conspiracy that pushed unneeded medicines on veterans.

Staffers in non-medical posts will not face firings while a court battle over the vaccine mandate is pending.

Sexual harassment in the military now a crime under Biden order