The California National Guard has been mobilized to support firefighting efforts in both northern and Southern California.

California Gov. Jerry Brown has declared a state of emergency in Butte County for the wildfire nicknamed the Wall Fire, according to Sacramento NBC affiliate KCRA. The 5,600-acre Wall Fire has destroyed 17 structures while threatening more than 5,000, according to the California Department of Forestry and Fire Protection.

The California National Guard will be joining 1,600 fire personnel already battling the blaze, which was only 35 percent contained as of Monday morning. California Guard aircraft mobilized Monday in northern California include three Army UH-60 Black Hawks and two Air Force HH-60 Pave Hawk helicopters, according to a press release from the California Guard. 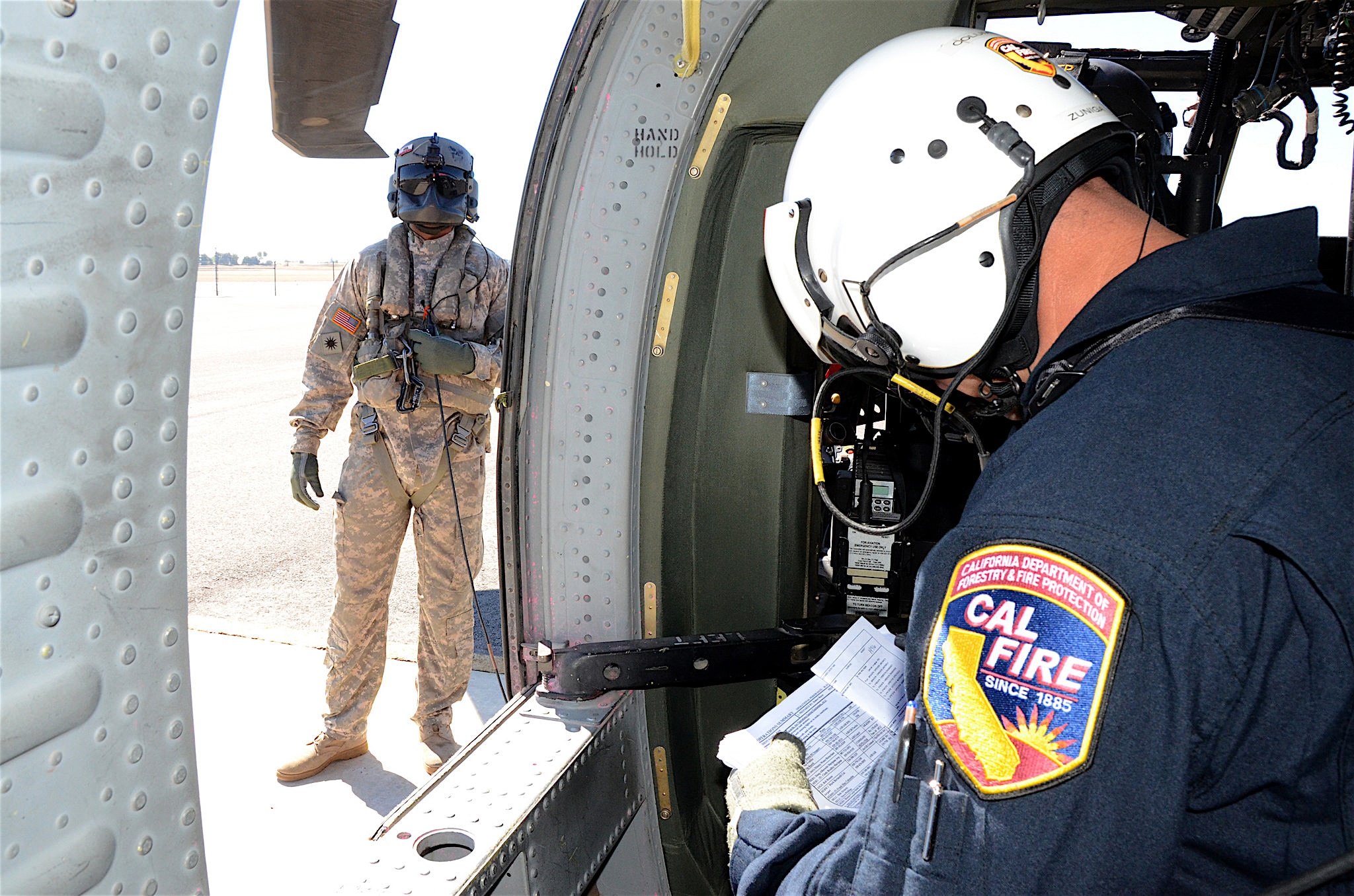 A soldier from the California Army National Guard stands by his helicopter with a Cal Fire firefighter on-board.
Photo Credit: California National Guard
Additionally, the California National Guard will deploy assets to fires in Southern California at the request of Cal Fire. Three Black Hawks and two Air Force C-130J air tankers will be deployed to separate fires in neighboring Santa Barbara and San Luis Obispo counties. Based out of the 146th Airlift Wing, the air tankers are capable of delivering 3,000 gallons of water or fire retardant. The 7,800-acre Whittier Fire in Santa Barbara County was only five percent contained on Monday, according to Cal Fire.

"The Cal Guard trains alongside CAL FIRE and [California Office of Emergency Services] year-round for days like today," said Maj. Gen. David Baldwin, adjutant general for the California National Guard. "This is a true team effort. Our air crews are geared up and ready to support CAL FIRE wherever they might need us."

In addition to the California fires, there are currently 85 National Guard service members fighting wildfires in Arizona, Colorado and Wyoming, according to the Department of Defense.

The Colorado National Guard will support firefighting efforts in Moffett County, Colorado, by providing two Black Hawk helicopters with crews and aerial water buckets to fight the Peekaboo Fire. The Black Hawks are capable of delivering 500 gallons of water or fire retardant to the front lines of the fire. Colorado Army National Guard fuel trucks will also deploy to assist with aerial refueling.

In addition to the Black Hawks, the Rocky Mountain Area Coordination Center has requested two CH-47 Chinook helicopters to be staged on stand-by for state-wide firefighting efforts. The Chinooks will be staged at Buckley Air Force Base outside Denver. 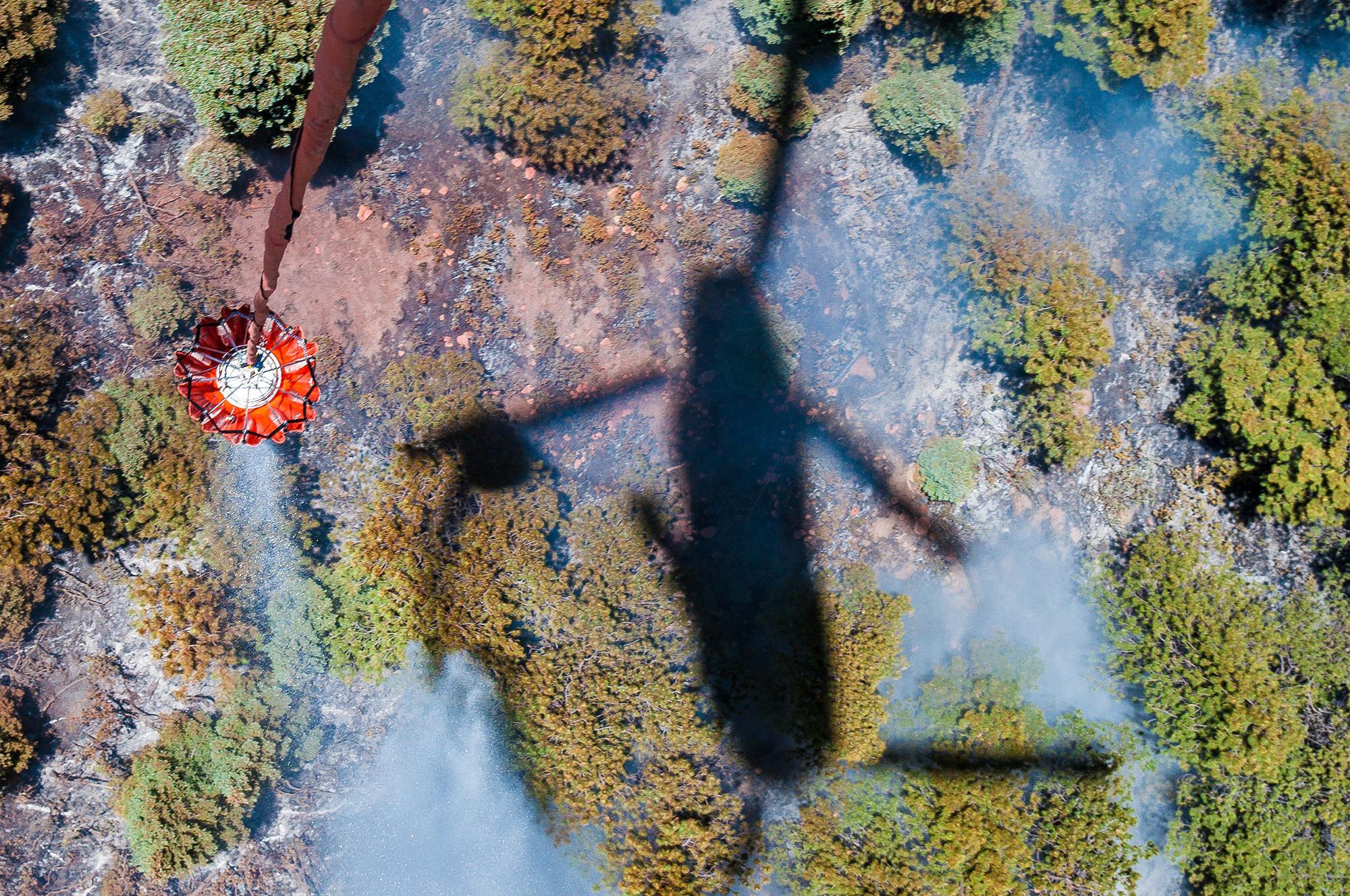 A CH-47 Chinook crew from the Colorado Army National Guard's 2nd Battalion of the 135th Aviation Regiment, stationed at Buckley Air Force Base, performs helicopter bucket operations, June 21, 2013.
Photo Credit: Colorado Air National Guard photo/Capt. Darin Overstreet
"The protection of our neighbors and response workers is our top priority," said Air Force Col. Gregory White, who commands the military response to domestic operations in Colorado. "Our military training is being put to good use throughout the state. We're proud to support the professionals at all levels of the response effort."

One Colorado National Guard Black Hawk remains deployed to assist with aerial casualty evacuations for the Peak 2 Fire in Summit County, near Breckenridge.

Ricky Shiffer served in the Navy and the Florida Army National Guard, according to military records.

With the help of Oplign, Amazon is using artificial intelligence to match skill sets of veterans and their spouses to careers post-service.