His chain of command said they'd put him in for the Army's second-highest valor award back in 1967, but retired Master Sgt. Hank Beck didn't give it another thought until a unit reunion more than 40 years later.

His buddies asked him about his elusive Distinguished Service Cross, and it was a conversation that spurred a seven-year, grassroots effort to get Beck the recognition he deserved.

Beck, now 69, is credited with risking his life to single-handedly take out a sniper team and a machine gun position during a firefight in Vietnam, saving his own six-man reconnaissance team and another team nearby.

"I felt honored. I was moved," Beck said of the Feb. 27 ceremony at the Pentagon." I was humbled, and I felt watched over and guided by a lot of people."

The retired NCO, who transferred from infantry to Special Forces in 1980, received his award from Army Chief of Staff Gen. Mark Milley, one of his former team leaders, who hosted the ceremony in front of Beck's family and friends.

"In the process of that 60 minutes or so, Hank eliminated an estimated 10 enemy personnel and an unknown number through airstrikes and other forms of indirect fire," Milley said. "Hank Beck's heroism, valor and leadership under fire clearly mark him as an American hero."

Milley was surprised to learn about the forgotten award, Beck said.

"He asked me, he says, 'Damn Henry, you never brought that up to me, why?'" Beck told Army Times in a Monday phone interview. "I said, 'What good would it do?'"

"When I walked into the recruiter’s office, he said, 'My God, you want to go airborne infantry? Have a seat,'" Beck said.

Beck and his team were dropped by helicopter over a blind landing zone near a supposed secret Viet-Cong base, he said.

Seconds after the helicopter took off, he recalled, the men in the front of the patrol line started dropping — shot by sniper fire.

"To protect his team, Specialist Four Beck exposed himself to enemy fire to throw a smoke grenade and call for suppressive fire while he ran across the open terrain to the spider hole," according to his award narrative.

Beck charged the position with his M60 machine gun.

"I threw a hand grenade in, and I hosed them down with my machine gun," he said. "I killed them both."

After killing two more North Vietnamese soldiers who spotted him near the sniper position, Beck said, he heard over the radio that a fellow recon team was pinned down by machine-gun fire.

"Again without regard to his personal safety and at extreme personal risk, Specialist Four Beck turned and charged the gun position alone and succeeded in killing the surprised five-man gun crew," according to the award narrative. 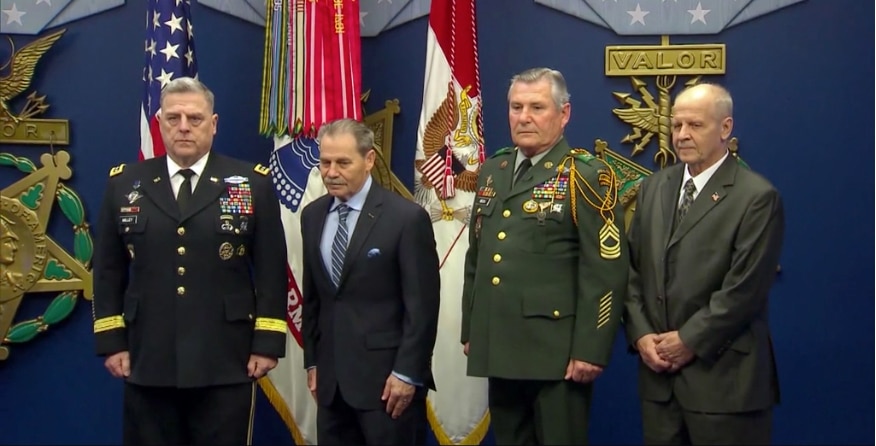 A couple months later, Beck was back in the U.S., transferred to the 82nd Airborne Division at Fort Bragg, North Carolina.

He did two more tours in Vietnam, eventually serving with the 509th Parachute Infantry Regiment as part of the 8th Infantry Division in Europe and the 101st Airborne Division a second time, Milley said at the ceremony.

After working on the Special Forces scuba team and training local forces in Mogadishu, Somalia, he said, he retired in 1985, just a few months after graduating from the Sergeants Major Academy.

"And everybody said, 'You’re crazy,'" he recalled.

Beck spent the next 20 years as a sheriff's deputy with Volusia County and Orange County in Florida, and it wasn't until a 2010 reunion of his 101st Airborne battle buddies that talk of his Distinguished Service Cross resurfaced.

"It’s a long and devious task, if you really want to do it," Beck said.

In 2011, the awards office came back with an award of a Silver Star, citing a lack of evidence to bestow the higher award.

"I was going to just let it rest, but they’re going, 'Henry, this is bullshit. That’s what we put you in for, that’s what you’re going to get,'" Beck said of Bowen and Karpuszka.

The men reached out to fellow unit veterans and managed to get a statement from both their battalion commander, retired Lt. Gen. Donald Rosenblum, and their battalion operations officer, Beck said, then filed an appeal of the award.

"He provided new and compelling eye witness statements from individuals who witnessed his actions, which very clearly made the case for the Army to upgrade his award to the Distinguished Service Cross," Hank Minitrez, an Army spokesman, told Army Times.

Fifty years later, almost to the day, Beck said he was moved to receive the award from Milley alongside his brothers.

"That day of the action, I’ll tell you, a great being was watching over me, protecting me," he said. "We all should have died that day."
About Meghann Myers

Zelenskyy to Russians: Get names tattooed so we can ID your corpses

Ukrainian President Volodymyr Zelenskyy has generated no shortage of eye-catching headlines and propaganda.

Installations like Naval Station Mayport and MacDill Air Force base are cleaning up in the wake of Hurricane Ian.

Zelenskyy to Russians: Get names tattooed so we can ID your corpses