The Army is building an airborne bomb squad

The Army is building an airborne bomb squad that can respond to contingencies around the world as quickly as the 82nd Airborne Division and the Global Response Force.

For 10 years, the Army has been working on a way to get its explosive ordnance disposal specialists to the scene sooner, and their solution is to take to the skies.

"This is definitely not something that I thought was going to be a part of this job when I joined," Sgt. 1st Class Aaron Golson told Army Times in a phone interview.

Golson's platoon made three jumps between Oct. 29 and Nov. 3 as part of a qualification progression that 16 EOD soldiers are taking on, according to Capt. Zachary Abood, the 767th's commander.

"The purpose of us jumping in is to offer EOD support earlier on in the joint force entry operations, and that’s what the 82nd does," he told Army Times. "Right now, as it stands, we follow on behind, probably hours, if not days, the current tip of the spear."

But if the Army can train up an airborne bomb disposal unit, he added, technicians can jump into combat with paratroopers responding to sudden conflicts and be on the ground protecting troops from conventional ordnance to improvised explosive devices.

"EOD’s role in support of the [Global Response Force] is a lot of protecting the force during rapid threat assessment," Abood said. "Once our guys jump in, they’re looking at threats the force may encounter."

Currently, the Army's only airborne EOD element is the 28th EOD Company, which supports only the 75th Ranger Regiment.

The 767th Ordnance Company is building its airborne ranks up to 19 soldiers, starting earlier this year with eight basic parachutists and sending six more to jump school at Fort Benning, Georgia. The original goal, Abood said, was to try blending EOD troops into the 82nd Airborne's GRF.

"But ultimately, as far as I know now, the goal is to have an airborne battalion," he said. "An EOD battalion that is airborne." 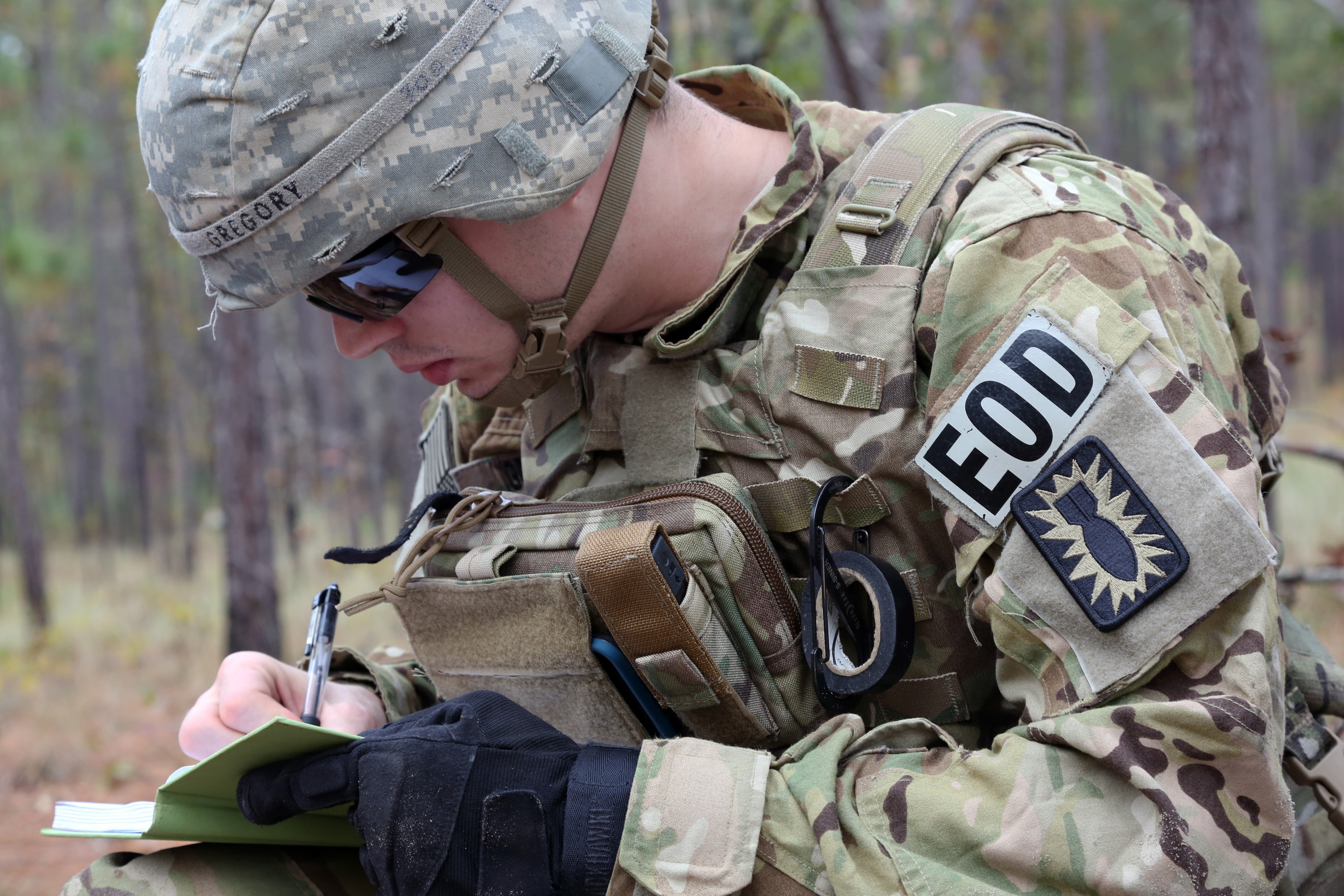 Sgt. Logan Gregory, assigned to the 767th Ordnance Company, writes down components of an improvised explosive device during a training exercise at Fort Bragg, N.C. The exercise was held to test the company's skills as explosive ordnance disposal specialists in response to a possible IED situation.
Photo Credit: Sgt. George Huley/Army
Once soldiers are trained to jump out of planes, the tricky part becomes figuring out how to drop a complement of bomb-detecting and disposal equipment from thousands of feet above the ground.

"One of the biggest things is weight," Abood said. "Typically an EOD team is loaded out with an entire tactical vehicle’s worth of equipment. Figuring out what fits in our rucksack, what can get dropped out of an airplane, is what we’re dealing with currently in terms of the logistics."

So now, basic equipment like rope and metal detectors can fit in a bag, while bigger pieces like vehicles and robots will have to be dropped separately.

"In this we really only have what we can carry, and we have to recognize we can only take so many tools with us, because we have equipment that we have to take from a personal standpoint," Golson added. "Water, food, ammunition, explosives to do any EOD work."

In the long term, Abood said, the goal is to put together a heavy load with an all-terrain vehicle and any other equipment that won't fit in a ruck. And once the first platoon is set up, the plan is to add another and then headquarters element that could deploy attached to the 82nd Airborne.

The possibility of airborne EOD could be a huge culture shift for both communities.

"In my eyes, the most important thing about actually being able to be a part of the first wave is not necessarily excitement," said 1st Lt. Sean Connors. who leads the 767th Ordnance Company's 2nd Platoon. "It would be to actually do our job and protect them as best as possible. The more that we’re there, the more we have the ability to actually do that."

It would also change the way troops look at EOD teams, Golson added.

"Our mentality has changed," he said. "The idea of being right out there on the front line from the get-go is really not a foreign concept anymore. It’s kind of a mentality we’ve embraced."

And plus, there's the thrill of jumping out of a perfectly good airplane.

"As far as jumping out of planes? Eh, it’s all right," Golson said.
About Meghann Myers